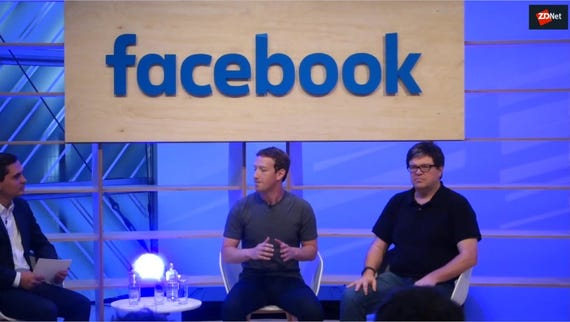 Facebook's troubles don't have an end in sight
Watch Now

It's more similar to oxygen or drinking water than it is to most technology products. With over 2 billion users visiting its social network every month, Facebook has a group of people logging in that is so large, so diverse, and so geographically distributed that no single company would have dreamed of an audience this big even just a decade ago.

The only company that even comes close today is Google, which has eight products with over a billion users -- Google search, Gmail, YouTube, Google Maps, Chrome, Android, Google Play, and Google Drive. But naturally, most of those are the same users using multiple Google services. WeChat recently crossed a billion users, but almost all of them are in one country -- China.

It is Facebook that has gathered the most diverse group of people in one place in human history and has created a powerful opportunity to help build a world where we can understand and experience our common humanity in ways that were never possible in previous generations.

Paradoxically, the opposite has happened.

Facebook became the place for people to find others to mirror their narrow self interests and their worst biases and prejudices. Things they wouldn't have said out loud in their own communities -- for fear of being marginalized -- they spewed into comments or represented by sharing banal posts aimed at demonizing certain groups of people.

The worst examples, of course, came during 2016 when the US was in middle of its polarizing presidential election and the UK was caught up in the Brexit vote to leave the European Union. As the volume of the divisive rhetoric soared, Facebook -- and Twitter -- did little to rein in the most abusive and threatening comments.

In the name of free speech and open dialogue, the world's largest social network took a laissez-faire approach to identifying when people crossed the line from passionate dialogue into hate speech. It's nearly impossible to view that choice without cynicism. After all, as the level of nasty debate grew, so did Facebook's traffic and its profits.

However, the backlash from Facebook's approach has come crashing down on the company in 2018. It was revealed earlier this year that right-wing data company Cambridge Analytica used Facebook's lax data policies to harvest profiles in shady ways to try to manipulate voters in key battleground states during the 2016 US election.

As a result, the public's trust in Facebook has dropped precipitously.

At the same time, user engagement on Facebook has also dipped significantly. In 2016, users spent an average of one hour per day on Facebook. That has dropped to roughly 41 minutes per day in 2018, so engagement is down by a third.

Further, Facebook user growth has stalled out, as the company reported at the end of last month.

You could certainly argue that Facebook's problems aren't all of its own making. It's a tool that people use in whatever ways they decide. The fact that humanity has used the social network to power a renewal of tribalism, nationalism, and bigotry is hardly a phenomenon that Facebook or anyone else would have predicted.

The problem for Facebook is that it took so long to respond -- and it only truly did so after the issue became a PR nightmare. It had the opportunity to step up and figure out where the line was between healthy dialogue and hate speech, and it passed the buck. It prioritized user growth and activity over creating a healthy platform.

A crisis doesn't build character, it reveals it -- as the aphorism goes.

Facebook has lost credibility. Few believe that it can be a leader in solving a problem that it helped create.

As a result, the narrative around Facebook as a company and a platform is that it doesn't look out for its users' best interests. It doesn't put them first.

And so more people are tuning out.

Getting them to change their minds and trust Facebook again could be an even bigger task than the monumental one it took to create the single largest gathering of humanity in the history of the world.

Communities are built on trust. And the world community is making it clear that it has little trust in Facebook -- and rightfully so.

Agree or disagree? Let me know on Twitter: @jasonhiner