Why smartphone and laptop batteries explode, and what can you do to protect yourself

Make no mistake, a faulty lithium-ion battery is incredibly dangerous, and it can explode. Thankfully, explosions and fires don't happen all that often.
Written by Adrian Kingsley-Hughes, Contributing Writer on July 6, 2017 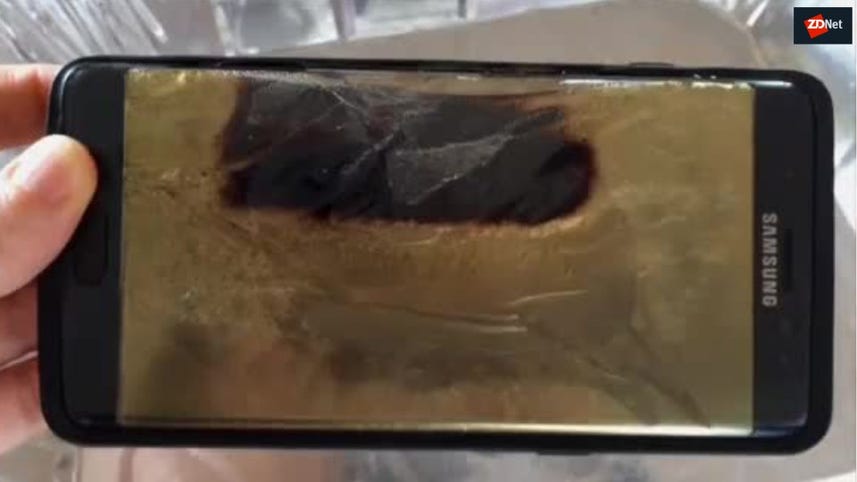 Take a quick look around your home or office. How many electronic devices -- laptops, smartphones, tablets, power banks, chargers and such -- can you see? I'm betting that it's quite a few.

For the most part, electronic devices are incredibly well-behaved, but when things go wrong, they can go from bad to worse to terrible in a matter of seconds.

Here's a quick rundown of the reasons why electronic devices such as smartphones and laptops explode -- the Samsung Galaxy Note 7 and hoverboards spring irresistibly to mind -- and steps you can take to protect you and your family from such dangers.

I carry out electrical safety testing, following the UK regulations (which are some of the most stringent in the world), and find that the two biggest dangers facing users are:

A modern rechargeable battery contains an awful lot of power in a very small space. Most of the time, batteries do what they are supposed to do -- which is give off that energy in a slow, controlled fashion -- but if ever anything causes it to release that energy in a hurry, that's when there is a risk of explosion and fire.

As someone who has been witness to several battery fires, some deliberate, others unexpected, I have a healthy respect for just how much energy we carry around in our pockets and bags.

Make no mistake, a faulty lithium-ion battery is incredibly dangerous, and it can explode. And when I say explode, I don't mean a tiny pop along the lines of a party popper that makes adults jump and little kids shriek in delight. An angered battery pack goes off with a proper, heavy-duty bang, and it has enough energy to shatter the device wrapped around it, creating a shower of glass shrapnel.

But a bang and the resulting shrapnel isn't all you need to worry about, because chances are that at the same time you will also find yourself in the middle of a spray of molten lithium metal and a thick, acrid cloud of choking toxic fumes.

And this enthusiastic chemical reaction is probably not going to happen when you're in the well-ventilated outdoors, away from combustible materials. Oh no, it's going to happen when you least expect it. Maybe when the device is all snugged up in your pocket, or when it's on charge in the car and you're zipping down the highway.

Or when it's right next to your head on your nightstand.

Thankfully, explosions and fires don't happen all that often.

The reasons why devices explode and catch fall into three broad categories:

Manufacturing defects: A bad batch of batteries (as was the problem with Samsung's Note 7), a problem on the assembly line that caused a component to be damaged, or the use of the wrong components can all cause devices to fail.

Interestingly, while the media is quick to blame manufacturing problems for device fires and recalls, it's actually pretty rare thanks to the myriad of safety checks that reputable manufacturers carry out.

Flawed design and counterfeit products: You usually only see this with cheap, poorly made devices. Some of these are made by manufacturers who don't know what they are doing, and others are made by firms that are clearly cutting corners. Unfortunately, this stuff is flooding outlets such as eBay and Amazon, and it can be difficult for the average person to tell the difference between a well-made product and a poorly made one because many times the devices feature fake regulatory markings.

Many of the cheap and counterfeit products don't contain safety features that products from reputable makers have.

Products damaged in use: End users are the most common reasons why products become unsafe. Throwing devices about, getting them wet, charging them with the wrong charger, and leaving them to bake in the sun are all bad ideas.

Better made devices will contain safety features (which include protection from overheating, overcharging, being discharged too much, and protection from short-circuiting and being recharged using the wrong charger) that work to prevent damaged devices from becoming unsafe, but nothing is foolproof.

Caring for your rechargeable batteries

So what can you do to protect you and your family from the dangers?

I don't expect you to have access to thousands of dollars of test equipment, but the truth is that you can spot most dangers without it. In fact, I usually identify a good 90 percent of unsafe products from nothing more than a visual inspection.

By following a few simple rules you practically eliminate all the common causes of fire and explosion.

Do not underestimate how quickly a lithium-polymer battery can catch fire, and how dangerous they can be. The video below shows how rapidly a small lithium-polymer cell from an RC plane can go from being OK to being in flames.

And if you are unlucky enough to face a burning electrical device:

I want to reiterate that electronic devices are, on the whole, extremely safe, and they're not something that you should lose sleep over. By buying a known brand name from a reputable outlet, and taking care not to abuse or damage that device, you're unlikely to have any problems at all.