It also paid AU$155 million in regulatory and customer remediation costs in response to the Royal Commission.
Written by Campbell Kwan, Journalist on Aug. 6, 2019 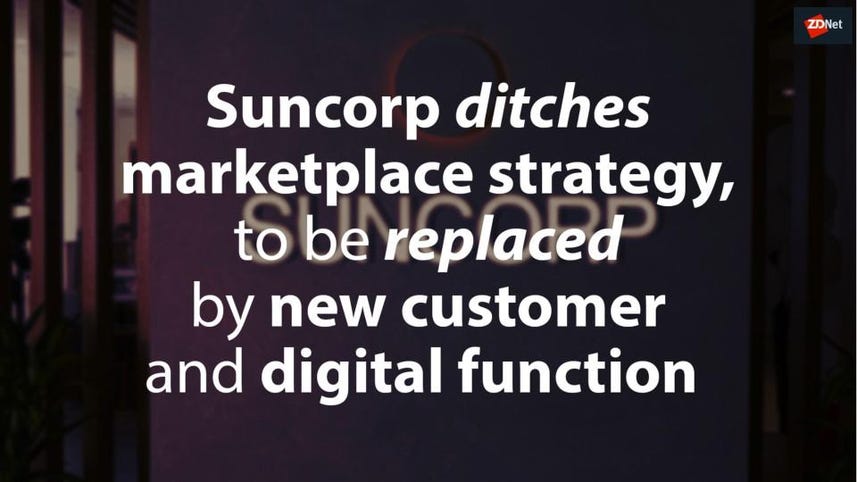 Suncorp announced at its FY19 earnings briefing that the company will move away from having its digital marketplace as a core strategy, with acting CEO Steve Johnston acknowledging the marketplace was "too ambitious relative to where our business is at and the funds we have available to invest".

Pip Marlow, the person charged with running its digital marketplace strategy, will leave the company at the end of August.

The digital marketplace play was meant to operate as an online financial services supermarket, "creating a connected network of brands, partners, solutions, and channels to meet our customers' financial wellbeing needs," the company said back in 2017.

In its place, Suncorp will introduce a new customer and digital function that it says will "[bring] together digital, marketing, customer, and strategy ... Working alongside our technology team, this function will develop innovative digital-first customer propositions for our insurance and banking businesses".

"Digitising our business and improving the way we collect and then use data is absolutely the right strategy," Johnston said. "It allows the new function to be totally focused on the customer and digital programs of work."

The contact centres, stores, and intermediary distribution teams that were previously positioned in Suncorp's digital marketplace will be moved to the insurance and banking arms.

Suncorp said it would provide further details about the new customer and digital function in the coming weeks.

The customer and digital function will be headed by Lisa Harrison, Suncorp's chief program excellence officer.

For FY19, Suncorp's net profit after tax was AU$175 million, a drop of 83.5% from AU$1.07 billion. The large reduction stemmed largely from its AU$910 million non-cash loss from the sale of Australian Life Business, its former life insurance and wealth arms.

The banking and wealth business net profit fell 1.4% to AU$364 million, which Suncorp attributed to a slowdown in the housing sector and increased competition for both mortgages and deposits.

Its New Zealand business made the biggest improvements for FY19 among Suncorp's various segments, delivering a net profit of AU$245 million, an 81.5% increase year on year. Strong growth in written premiums, improvements in claims management, and a benign year for natural hazards contributed to this record profit were the reasons for the uptick, it said.

Cash earnings climbed 1.5% to $1.1 billion. Suncorp also accrued AU$155 million in regulatory and customer remediation costs for FY19 in the wake of the Royal Commission.

The Suncorp app, which was rolled out during the financial year, currently has over 525,000 downloads. Suncorp developed its app in one year -- from July 2017 through July 2018.

In preparing for the app, Suncorp conducted a number of innovation days, called FedEx Days, and hackathons, Suncorp enterprise architect Dalton Cranston said. It also built a reference hackathon platform in its digital labs that he said provided a platform for people to conduct experiments on.

It also has 3.35 million customers that currently use its digital assets, which include its internet banking services, mobile banking app, insurance policy self-service web, and mobile applications.

How Suncorp was able to build an app in a year

Suncorp's enterprise architect discusses the processes that enabled the organisation to build an app and its underlying infrastructure in 12 months.

Suncorp spent AU$29m on tech in year of reshaping