KT's 5G network will be ready for use in 85 cities across South Korea, including Seoul, by the end of the month. This includes 5G service coverage throughout various major national highways and high-speed railways.
Written by Campbell Kwan on March 25, 2019 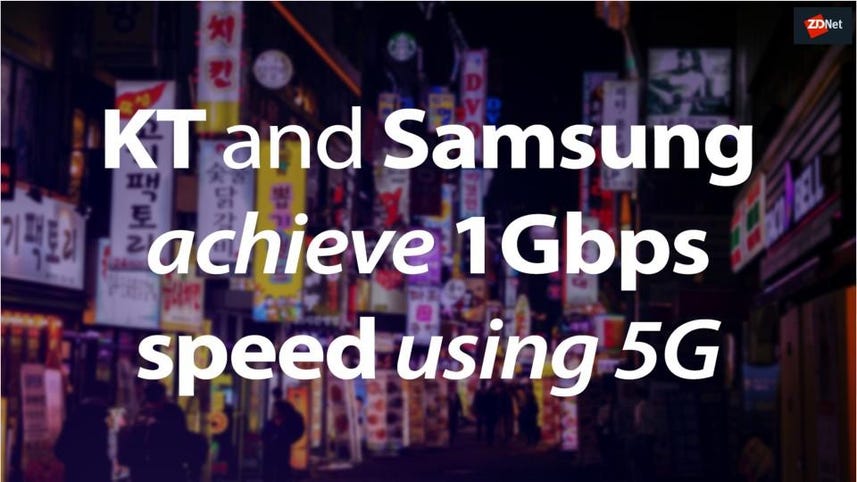 KT and Samsung have achieved 1Gbps speed over the air using the telco's 5G commercial network in Gwanghwamun, Seoul.

During the speed test, the telco used the Galaxy S10 5G and 3.5GHz spectrum on its 5G commercial network, which comprised of Samsung's 5G NR kit that uses 5G radio and a non-standalone virtual core (vCore) to support both 4G LTE and 5G simultaneously.

According to KT, the speed test was performed in real-world outdoor mobile environments, with the telco saying it was confident that end-users would be able to achieve 1Gbps speed on 5G smartphones connected to its commercial network.

The telco also announced that its 5G network would be ready for use in 85 cities across South Korea, including Seoul, by the end of the month. This includes 5G service coverage throughout various major national highways and high-speed railways, such as KTX and SRT.

The South Korean telco has plans to eventually cover 464 colleges and universities, subways, landmark buildings, and mountainous areas across the country.

This follows the South Korean government earlier this month announcing it was facing delays to its original plan to deploy 5G by March, due to industry players not being ready. This included government and telcos failing to agree on 5G pricing plans, as well as 5G smartphones not being ready from Samsung and LG.

At the same time, KT is rolling out a 5G-based ultra high-definition (UHD) live broadcasting service, through which it has already provided an enterprise 5G network and 5G mobile news gathering equipment to news broadcaster Seoul Broadcasting System.

SK Telecom also announced earlier this month that the upcoming Galaxy S10 5G smartphone will provide speeds of up to 2.7Gbps in South Korea, after the telco successfully tested the aggregation of its 5G and 4G LTE networks.

KT 5G being launched by Ericsson

KT's 5G network will be commercially launched in early April, with the Korean carrier partnering with Ericsson for the deployment.