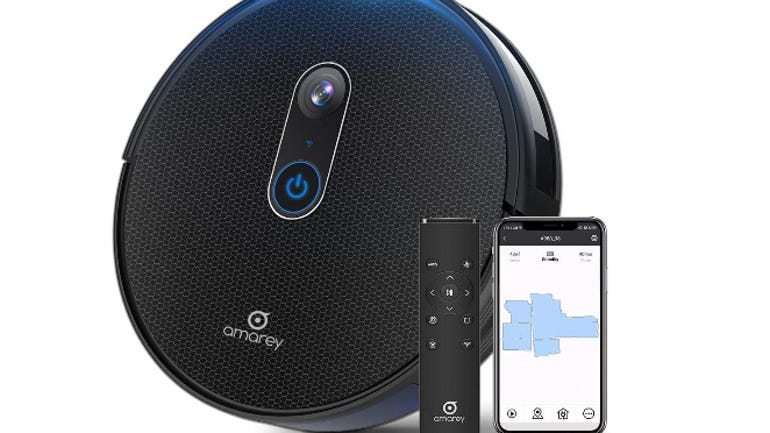 I quite like the Amarey A980 robot vacuum, and apart from initial teething problems connecting the vacuum to the app, the A980 automates its cleaning really well.

The A980 is a nice, simple-looking robot. There is no protruding sensor sticking out of the top of the device to catch under furniture or radiators. The sensor is flush with the top of the robot, and at 3 inches high, its low profile means that it will not get stuck too often.

Its 1600Pa power gives a good clean on carpets and hard flooring, and it will clean for over 90 minutes before the 2600mAh battery needs to be recharged.

Amarey says that the battery is replaceable. I suspect that the robot will malfunction long before the battery would need to be replaced.

There are two spare side brushes in the box -- so as the side brushes wear, you can replace them before needing to purchase another set of brushes -- a nice touch by Amarey.

Like most other robot vacuums, the Amarey has edge sensors that ensure that it will not fall off ledges or stairs. This also means that the robot does not bump into objects in its path, but swivels around and moves back across its path.

Its dust bin is easy to remove, and unlike the messing around with the A800 and A900 bins, I found that opening the bin to empty the dust was much easier than earlier models. The bin seems larger than the other models too -- so I emptied it less often.

I had a huge challenge trying to connect the robot to my Wi-Fi, but after an hour of frustration, I finally found a workaround that allowed me to connect.

I configured the app settings and pretended that I had a US phone number. I used an Outlook.com email address instead of .co.uk for validation and pressed the Wi-Fi connect button on the robot.

To bind the robot to the Wi-Fi, the app has a QR code that you show to the sensor on the top of the robot, and voila -- the device connected to the app.

This works well, as long as you know the workaround hack. However, this is a significant issue for anyone not living in the US who wants to use the app to schedule cleaning patterns.

Once connected, the app enabled me to set an automatic schedule to clean, and it shows a map of the area cleaned and the total time that the vacuum has been in use cleaning. I can use the app to find the robot, which announces "I am here" when you touch the 'find' button in the app.

The room mapping function means that, once the robot has explored and mapped out its environment, it remembers where everything is in the room and cleans efficiently. It also knows where to return to its base after it has finished its cleaning cycle.

You can set zones in the app and configure the robot to clean certain zones at a schedule. There is also a magnetic strip you can use for a physical boundary. The robot will not cross this strip.

The app also allows you to remotely control the robot, but as there is a remote control in the box, unless you lose the physical remote control, the app remote is obsolete.

You can also control the robot using voice and detailed instructions are provided in the app; however, these are in Chinese.

Throughout the app UI, the English is poor, and there are several spelling errors, which should have been checked by a native English speaker -- shoddy work Amarey -- it devalues what is an excellent product.

In use the robot is quiet and structured in its mapping, building up a picture of the room as it moves around. Some robot vacuums seem to wander around a space randomly, but the A980 cleans methodically and ensures that nothing is missed as it moves across the space.

All in all the Amarey A980 performs well for a sub $350 robot vacuum. You can control it manually using Alexa, or by the remote control.

You can configure schedules in the app and leave it to perform an automated clean. Set it and forget it. All you need to remember is to empty the dustbin from time to time.