Apple Magic Keyboard for iPad Pro review: More productivity, but at a price

Apple Magic Keyboard - keyboard and folio case - with trackpad - US 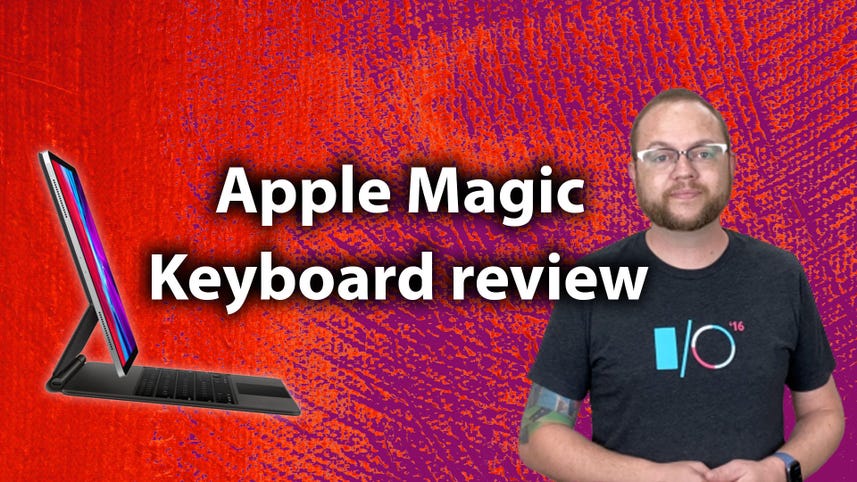 Apple's Magic Keyboard for the iPad Pro wasn't supposed to arrive until May, but Apple surprised everyone and started taking preorders in mid-April, with orders expected to arrive from early May.

The Magic Keyboard is the first iPad keyboard accessory from Apple that takes advantage of iPadOS 13.4's new trackpad support. It has a new hinge, complete with a USB-C port for pass-through charging (leaving the iPad's USB-C port open for connecting accessories), Apple's new scissor keys, and a backlit keyboard.

At $350 for the 12.9-inch model or $299 for the 11-inch model, it's not cheap. But it's exactly what I said Apple needed to borrow from Microsoft's Surface Pro X to make the iPad Pro more compelling, especially as users look to Apple's tablet as a potential laptop replacement.

I've been using the 12.9-inch version of the Magic Keyboard for a couple of weeks now, and one thing is clear to me: There's no going back to using an iPad without a keyboard/trackpad combo.

As you've probably seen in Apple's "Float" commercial, the Magic Keyboard has a completely new approach and design. Instead of using the same design as the Smart Keyboard Folio, which holds the iPad Pro up with two different viewing angles, the Magic Keyboard uses magnets to attach to the top half of the iPad Pro's back. Apple's Smart Connector is used for power and data pass-through between the keyboard and the iPad. I much prefer this connection over Bluetooth, which is what most iPad keyboard makers use. Not only does it get rid of any Bluetooth connection lag upon wake, but I also don't have to worry about charging the keyboard. I do, however, have to worry about the impact it has on the battery life of the iPad Pro. More on that in a minute.

For the most part, I've kept my iPad Pro in the same viewing angle during my time with the Magic Keyboard. But that's because most of my work has been done on a table or desk. When working with the iPad Pro on my lap, like a laptop, I've appreciated the added viewing angles that make it easier to comfortably view and interact with the screen.

Where the keyboard meets the rear of the case is a cylindrical hinge, and on the left side of the hinge is a USB-C charging port (more on this below). The hinge on the Magic Keyboard is solid. There's a high level of resistance when opening it until it locks into position. Once it locks, the screen of the iPad Pro continues to rotate away from the case, which is what provides the viewing angles.

The keyboard itself is made of hard plastic and uses the same scissor mechanism Apple is now using in the MacBook Pro lineup. The keys are backlit and automatically adjust based on your environment. The keyboard is easily the best-feeling keyboard I've ever used with an iPad. The keys are sturdy, responsive, and have a good feel with each press. They're evenly spaced and required almost zero time for me to acclimate to them and begin typing at full speed.

Below the keyboard is the trackpad, arguably the star of the show. The trackpad is also plastic and makes a loud, audible click when pressed. There is a long list of gestures you can use to navigate iPadOS with a trackpad. For example, a three-finger swipe up goes to the home screen, or a swipe up and pause with the same fingers will open the multitasking view. I published a complete walkthrough of gestures over on CNET.

Some gestures -- like hiding a slide over app -- have taken a bit of time to get used to, while the majority of them have felt natural. Coming from using a trackpad on the Mac for years, there's a lot of crossover between the two.

But what's been more investing to me is the mentality I've taken when working on the iPad with a trackpad just below the keyboard. Using the trackpad isn't something I have to consciously think about. It's not like I'm asking myself if a task is better suited for tapping and swiping on the screen, or if the trackpad is better. I instinctively go from typing to trackpad and back to typing without touching the display at all, and in turn, I feel far more productive and efficient.

After over eight years of using an iPad as a pseudo laptop replacement, using the touchscreen for navigation, I fully expected the switch to a trackpad to be a stumbling block. The exact opposite is true, and it's made me appreciate my iPad's versatility even more. I'd go so far as to say that my iPad Pro's screen has never looked this clean for this long. Usually, it's full of fingerprints and smear marks.

Settings for both the keyboard and the trackpad are buried in the settings app. You need to go to Settings > General and then either Keyboard or Trackpad. The former setting opens a long list of options that aren't new, however. You have to dive deeper by selecting Hardware Keyboard if you want to adjust the backlighting.

I wish this setting were easier and quicker to access -- perhaps as an option in Control Center. During the day, I do not need the backlight to be on at all, so I've often been turning it off, only to have to dig through settings to turn it back on after the sun goes down.

My biggest disappointment with the Magic Keyboard has been its impact on the iPad Pro's battery life. Instead of being able to go a couple of days' worth of casual use between charges, I have to charge my iPad Pro every night.

My iPad Pro is my laptop, and as such, it's what I take with me on work trips. For quick overnight trips, I don't even pack a charger, because battery life with the Smart Keyboard Folio has never been something I would have to worry about.

But with the Magic Keyboard, I don't think I'll have that same confidence once traveling becomes an option again. I'll have to pack a charger.

I do appreciate that the Magic Keyboard adds a dedicated USB-C charge port to the left side of the hinge. Not only does this free up the USB-C port on the right side of the iPad Pro, but it's a cleaner setup when I have to charge the iPad while using it (the cord isn't dangling off the side, halfway up the screen). I know, I'm nitpicking, but over the last year, I've grown frustrated with my charging setup for the iPad Pro due to the port's location. Sometimes, it's the little things that make a significant difference.

Not all apps have full trackpad support

When Apple released iPadOS 13.4, the company also released an API for developers to add advanced trackpad and mouse support to their apps. Some apps have already updated and work seamlessly with the Magic Keyboard's trackpad. However, some apps, such as Tweetbot, seems to either have basic support or no support at all. The main problem I encounter is when trying to drag across a tweet to view the thread or start a reply. It simply doesn't work. In fact, it will drag the tweet into a new window and open the Twitter app, leading to confusion and frustration.

In other apps, like Facebook Messenger or Slack, the mouse pointer doesn't automatically change and attach itself to a button or link as it often does in Apple's own apps. The overall experience isn't consistent, and at times, it's jarring and confusing.

I'm not sure if app developers need to implement the new API, or if there's some sort of limitation that's preventing a consistent experience. Whatever it is, I hope developers continue to add support, and in turn, the overall experience is as reliable and fluid as it is inside Apple's own apps.

For me, it's a clear and resounding yes. I'm willing to trade a few hours of battery life for the added functionality that just wasn't possible on the iPad prior to the Magic Keyboard. Granted, I use the iPad as a laptop and have done so for years, so I've had time to figure out which apps I need, which apps I don't, and adjust my workflow on the iPad to fit different tasks. However, I think anyone who sits down with an iPad Pro and the Magic Keyboard, will instantly get it. It'll be clear how Apple expects the iPad to be used right now, and it gives a glimpse as to where Apple is taking its tablet lineup into the future.