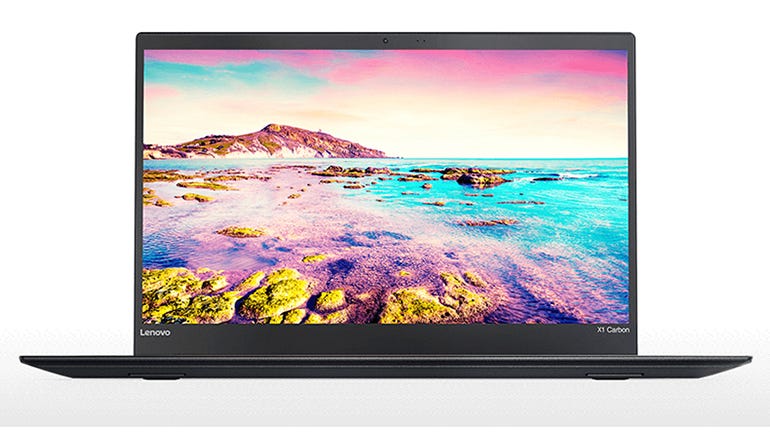 Lenovo's flagship business ultraportable, the ThinkPad X1 Carbon, has now reached its 5th generation. The new iteration is Lenovo's thinnest and lightest yet, bearing all the hallmarks that have made the ThinkPad X1 Carbon such a winner in the past. It also shares the characteristic of an eye-watering starting price that will put it out of the reach of many. But if you can afford it, you'll get an ultraportable laptop that's close to unbeatable.

The ThinkPad X1 Carbon has an iconic design, starting with the distinctive tough black outer shell (this model is also available in metallic silver). Made from materials that include a carbon fibre reinforced chassis and magnesium alloy roll-cage, this is one tough laptop. There's still some flex in the lid and I wouldn't carry this laptop around without a protective case, but Lenovo says it's "tested against 12 military-grade requirements and passes more than 200 durability tests". Business laptops don't come much tougher unless you specifically go for a rugged design.

Then there's the ThinkPad logo sitting jauntily across one corner of the lid. The tell-tale red LED over the 'i' indicates that the laptop is switched on, and when the lid is down it pulses to remind you that you can switch off completely in order to conserve battery life.

Despite slimming down, Lenovo has crammed in a 14-inch display. Not surprisingly, the bezels around the screen are narrow, although they're not quite as minimal as those on Dell's rival XPS 13 ultrabook.

However, this is a plus point. Dell had to come up with a less than satisfactory solution for positioning its webcam, which would not fit in the ultra-thin upper bezel. It sits on the bottom bezel, right over on the left hand side. On the ThinkPad X1 Carbon, there's enough room for the webcam to sit in the more conventional position in centre of the screen, at the top. If you regularly make laptop-based video calls, you may be happy to sacrifice some bezel thinness for an ergonomic webcam position.

The screen doesn't rotate fully but goes to 180 degrees, allowing the laptop to be laid flat on a desk or table. If you want more flexibility on screen positioning there are plenty of other options -- both business and consumer -- in Lenovo's Yoga range.

My review sample had a full HD (1,920 x 1,080) screen, and that's the resolution of both the currently available models on Lenovo's UK website. A quad-HD (2,560 x 1,440) option will become available over the summer, but as things presently stand it pales beside other vendors' flagship ultraportables. Dell's XPS 13 has a smaller 13.3-inch screen offering up to 3,200 by 1,800 pixels, for example, and there are plenty of other high-resolution options available.

The screen has a matte in finish, which will please many users who find reflective screens a big distraction. On the downside, the screen isn't touch responsive, which is something of a faux pas for a high-end laptop. Hopefully Lenovo will offer a touchscreen option at a later date.

If you're happy with HD resolution and no touch support, you should find this IPS panel perfectly good to work with: viewing angles are great, top brightness (300 nits) is more than adequate, and text, still images and video all render well.

The keyboard is another distinctive feature. The keys have the standard Lenovo 'belly' at the bottom edge that allows a little bit more real estate for accurate typing. They are large, and beautifully springy, with a relatively large amount of travel. This won't appeal to all, but I found it extremely comfortable to work with.

It's unusual that there are just two levels of keyboard backlight brightness rather than three, but that's a minor point, really.

The usual TrackPoint sits between the G, H and B keys, with its corresponding buttons occupying a row above the trackpad. There's a biometric sensor on the wrist rest to the right of the trackpad, and an NFC point in the top centre of the trackpad.

There are currently two models available off the UK website. My review unit was something of a hybrid, featuring Intel's top-end 7th Generation (Kaby Lake) Core i7-7500U processor but the 8GB of RAM that's a feature of the less expensive model. For the record, the two models' core specifications are:

You should expect a decent array of ports and connectors on a top-flight business ultrabook, and the 2017 ThinkPad X1 Carbon doesn't disappoint. There's a pair of USB 3.0 ports, a HDMI connector and a small-format Ethernet port (Lenovo provides a conversion cable to the more standard RJ-45 connector). There's also a MicroSD card slot on the back edge, beneath a cover that also protects the optional SIM slot, and a 3.5mm audio jack.

There are two USB-C ports, complete with Thunderbolt 3 support, both of which can be used to charge the ThinkPad X1 Carbon.

The speakers, which are on the underside of the chassis, deliver reasonably sound quality. Volume could go higher, however, and their positioning means that sound is inevitably dampened by softer surfaces.

Lenovo says the ThinkPad X1 Carbon's 3-cell 57Wh battery will provide up to 15.5 hours of life,with rapid charging providing 80 percent of capacity in an hour.

I found battery life very impressive. In about ten hours of relatively low-level use -- some writing, some web browsing -- I took the battery from 99 percent to 24 percent. I had the screen set at 80 percent brightness, which was plenty bright enough for my needs. This is the best battery life I've seen in a laptop for some time, and it's best-in-class for an ultraportable in my experience.

Lenovo's ThinkPad X1 Carbon continues to impress. Smaller and lighter than last year's model, it packs in solid components and plenty of ports and connectors -- an object lesson for vendors who try to get away with providing the bare minimum.

However, Lenovo has compromised with the screen on two counts: by not offering a touch-screen and by delaying the arrival of the high-resolution quad-HD option.

Then again, it could be the lower-resolution full-HD screen that allows the X1 Carbon to deliver something as rare as hens' teeth: all-day battery life in practice, as well as on the spec sheet. That may be a trade-off many buyers are prepared to make.