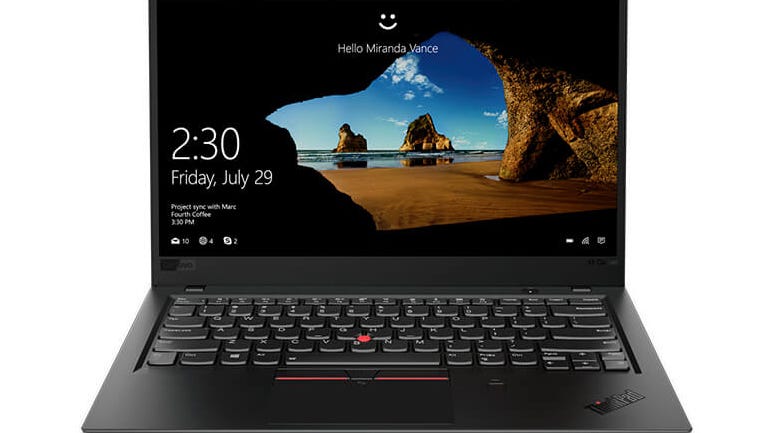 Lenovo's flagship 14-inch ThinkPad X1 Carbon is now on its 6th generation. It heads up the company's range of business laptops, along with two newer kids on the X1 block: the convertible ThinkPad X1 Yoga 3rd Gen and the detachable ThinkPad X1 Tablet 3rd Gen. All three devices share the robust build and top-end specifications that underpin the ThinkPad X1's reputation.

There are differences from last year's model, but they are few and subtle. So, on the lid we have the red and black X1 marque in addition to the traditional ThinkPad logo with the red dot over the 'i' that illuminates under certain conditions. And on the inside, Lenovo has added its ThinkShutter privacy cover to the camera. This is also found on the ThinkPad X1 Yoga (3rd Gen) and a 'lesser' model, the ThinkPad T480s (but not the ThinkPad X1 Tablet 3rd Gen). The shutter slides over the camera easily -- provided you have sufficient fingernail to slot into a groove. Nail-biters might have problems.

Elsewhere it's business as usual. The black chassis has a rubberised finish top and bottom that helps hold the laptop steady on a desk and prevents it slipping around in the hand. Carbon fibre keeps the chassis solid, and while there's some flex in the lid it's not enough to create concern about carrying this laptop around without a protective sleeve.

There's no change in overall size and weight, this year's model shows no change from last year -- the big change came between 2016 and 2017 when the overall footprint was reduced by 10 percent, and weight dropped very slightly:

It's a pity Lenovo didn't lose a little girth this time round, and/or create smaller screen bezels. As it is, the 14-inch screen has side bezels of 5mm, an upper bezel of 12mm and a lower bezel of 19mm. This isn't likely to be a deal-breaker, but if Lenovo were to make any concessions to fashion this year, it should have been here.

This is not a convertible laptop -- for that feature, look to the ThinkPad X1 Yoga 3rd Gen. The furthest the X1 Carbon's screen will go is flat to the desktop.

The 14-inch IPS screen has options for 2,560-by-1,440 and 1,920-by-1,080 resolutions, and for touch and non-touch versions, although no preconfigured touch models are available on Lenovo's UK website (see below). Three of the four off-the-shelf screen options have anti-glare screens, but my review sample had the glossy version. This is the only option with Dolby Vision, which offers 500-nit brightness and a wide colour gamut.

The screen options are:

The keyboard is a typical ThinkPad unit. The pot-bellied main keys require the very lightest of touches, and are extremely comfortable to use at speed for long periods. Lenovo's signature TrackPoint sits between the G, H and B keys, and is smooth and comfortable to use. Two physical buttons and a scroll button sit beneath the space bar, for use with the TrackPoint. NFC is integrated into the TrackPad, and there's a fingerprint reader to its right, in the wrist-rest area.

The preconfigured models are:

There's a fair range of connections, including a pair of USB-C Thunderbolt ports (one of which will be occupied during charging), a flash card reader, a headset jack and, for those taking the LTE mobile broadband option, a SIM slot. The flash card reader, which only reads MicroSD, sits behind the covered SIM slot on the back of the chassis. and is a hassle to access if all you want to do is copy a couple of photos.

Two USB 3.0 ports and a full size HDMI connector should keep those with older peripherals happy. However, unlike Fujitsu, Lenovo has been unable to integrate wired Ethernet (see my photos of the pop-out Ethernet connector on the Lifebook U938 for example), instead providing a dongle. There's no VGA, which Fujitsu has included on several laptops recently, including its twisting 2-in-1 Lifebook T938.

The speakers are the least impressive aspect of the ThinkPad X1 Carbon 6th Gen. Tinny even at lower volumes, they will just about do for video calls, but you'll be better off with a headset or external speakers.

Lenovo claims up to 15 hours for the X1 Carbon's 57Wh Li-polymer battery, but that seems a little optimistic. With my normal workload of writing, streaming and web research, for example, I tended to deplete a fully charged battery by 50 percent after around five and a quarter hours -- that is, about two-thirds of the way through an eight-hour working day. That means it's probably good enough for a day's work unless you're a power user. RapidCharge support means you'll be able to boost the battery to 80 percent capacity in an hour, if required.

Lenovo has done little more with the ThinkPad X1 Carbon 6th Gen than keep it up to date with processor and screen upgrades. It would have been good to see some size and/or weight shaved off, and for the screen bezels to slim down. It's also time to think about improving the speakers.

However, as with its predecessors, the X1 Carbon's tough chassis and excellent keyboard are standout features, while all-day battery life should be possible for all but the most demanding power users.

Lenovo launches full Windows 10 laptops that are cheaper than some Chromebooks (TechRepublic)
Their new line of IdeaPad laptops range from $250-$850, with features that could make them useful for business professionals.