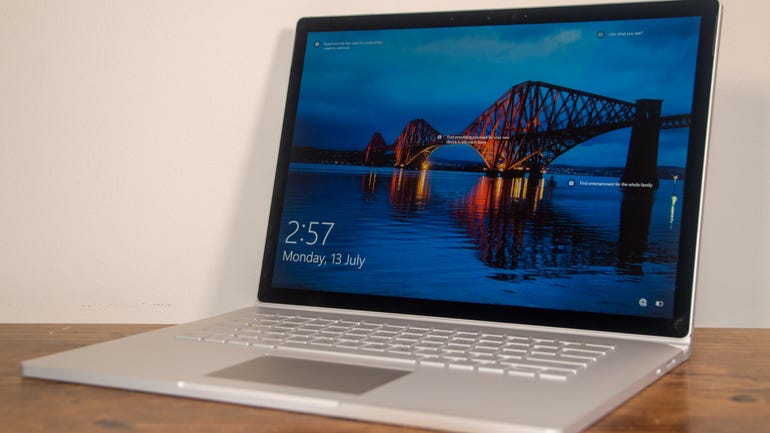 In the recent past, I've written about attempting to eek out 5 hours of battery life from laptops that are more or less in the same class as the Microsoft Surface Book 3.

After using the latest top of the line Surface Book for a couple of weeks, it's safe to say that where others will be running off to find powerpoints by mid-afternoon if they are lucky, you can keep powering away on the Surface Book.

Microsoft says the 15-inch model we reviewed will get 17.5 hours of battery life, and while battery numbers from vendors can be quite rubbery, we were able to get a full day's work done on battery power alone -- with the gorgeous 3:2 aspect 3240x2160 display still being at its default brightness, a browser session constantly polling various sites, and with the occasional burst of sound and video playback -- and still have over a third of the battery left for the commute home, should commuting ever return after 2020.

The secret to the Surface Book's staying power is the same since it first appeared. As well as batteries behind the display, there is a second lot placed in the orthodox position under the keyboard. This gives a large quantity of juice to use, but it also means Windows will often not be able to tell you how much battery is remaining time-wise. More often than not, it just relays the percentage left, which is usually fine when you have lots of power remaining, but I know things would get a little touch and go if it was under 10%.

Of course, using the Surface Book 3 to its full potential and winding up the quadcore Intel Core i7-1065G7 processor and the Nvidia GTX 1660Ti GPU will suck battery down like a drunk at the pub on payday -- but then so does any other laptop with hefty silicon like this.

The real question with this device is do you want to pay extra for all that battery? Because any old fool can buy a AU$3,000 laptop with a big CPU and a discrete GPU and still have around AU$1,000 leftover compared to a Surface Book 3 purchase.

But before we delve too deep into that, we need to talk about the unique Surface aspects of the design.

The most obvious visual to the Surface Book 3 is its distinctive hinge. We are now three iterations in and I'm still not convinced the gap left between the display and the keyboard when it is shut is not a disaster waiting to happen.

If you happen to drop a metal object -- like a coin, a pen, or the 3.5mm end of a set of headphones -- into the bag pocket you were carrying it in, I could see the display having the look of a scratch lottery ticket. Clearly Microsoft is happy with this design, but despite my non-scratched usage, I cannot stop thinking that if I were lazy one day, I could ruin the screen in an instant.

Given the distinctive bendy look of the hinge, you'd be forgiven for thinking it is able to swing through many degrees of rotation, but alas, its motion is quite limited and stops at the 135-degree mark.

The second distinct feature is the continuing existence of the Surface connector, which sits on the right hand side with its one USB-C port. Hopefully this is a glimpse of the past/present rather than future of how Surface Books and docks are powered and connected, respectively. Interestingly, the USB-C port will take power as well, so it's not as though Microsoft has ignored the power via USB-C proposition, unlike it not allowing Thunderbolt to appear on Surfaces. It is a curiosity rather than a dealbreaker.

The third distinctive feature of the Surface Book is the detachable screen, which transforms it from a 15-inch laptop into one of the bulkiest tablets you can get around with. Unlike many of its Surface brethren, the tablet portion is without a stand so it needs to be held or rested against something to be at any angle other than flat. The utility of this mode, compared to being in laptop mode, escapes me. Nevertheless, Microsoft has dedicated a button on the keyboard and an everpresent icon in the notifications area to remind you the screen is detachable.

To my mind, the Surface Book would be much better served if the hinge did what it looked like it should be able to do, that is, flip all the way around to allow the display to rest on the back of the base. This would also address the drop in battery capacity when detached, allowing the laptop to be touch-only if needed, while still being able to use the discrete GPU housed in the base.

With diversions into uniqueness complete, it's time to address the literal AU$1,000 question. Can the extra battery make up for the cost?

I think it can if you take a long view. In recent office life, the first sign that a decently outfitted laptop is headed towards being replaced isn't because it begins to struggle with loads, but usually because its battery is not holding its charge the way it used to.

For folks that are office-bound, this issue can be worked around since the laptop is really untethered from its power for long periods, but for road warriors, it's a crucial issue.

This laptop doesn't just get a full day when it is new, it smashes that milestone without needing to pull off any battery-saving shenanigans at all. That means that as battery life begins to go, the first thing you might notice after a year or two is needing to charge it during the day.

This is the sort of luxury that I can only dream about with my current work laptop.

If you are looking at it from a purchasing angle, this means the need for a replacement is kicked down the road for a year or two as well, meaning the bean counters are also happy, once they recover from the shock of the initial price.

For a top of the line laptop that also has a top of the line price, there is a lot to like about the Surface Book 3, and if battery capacity is a key decider of your next purchase, you'll be very happy with this hefty laptop.

Mobile knowledge workers who are also Surface enthusiasts with deep pockets will love this ARM-based tablet/laptop. Gamers and creative types should look elsewhere, for now.

Microsoft has not unblocked the Windows 10 2004 update for Surface devices, after all

Microsoft is continuing to block the May 2020/Windows 10 2004 update on certain devices, including many of its own Surface PCs, in spite of an apparent lifting of the block a week ago.

The Surface Go 2, Surface Book 3, Surface Dock 2, Surface Headphones 2, Surface Earbuds, and a USB-C Travel Hub are all available for preorder and will be shipping this month.