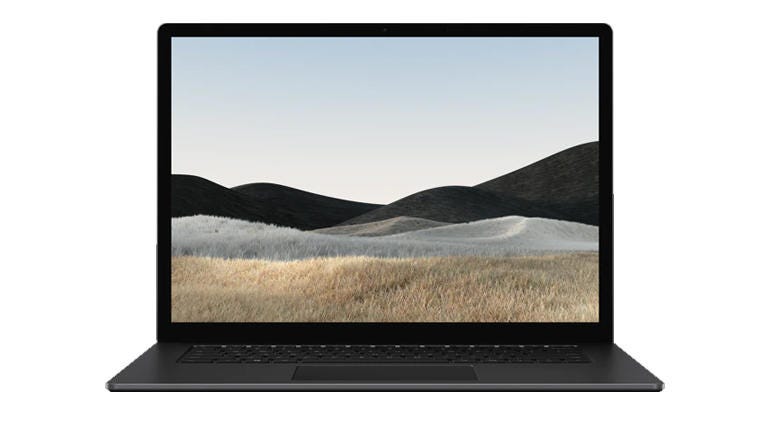 We looked at the 'for Business' version of the Surface Laptop 4 -- specifically the AMD-powered matte-black 13.5-inch model with 16GB of RAM and a 512GB SSD. This costs £1,629 (inc. VAT) or $1,699.99 and comes with Windows 10 Pro and extra built-in security management. IT departments will like the security and management that's delivered out of the box. Users will like the performance and battery life that join the sleek design and long battery life familiar from the Surface Laptop 3, as well as the gorgeous screen.

Unlike other Surface models that feature folding or detaching screens, the Surface Laptop has, as the name suggests, a traditional laptop design -- albeit a very thin, sleek and lightweight one that's also extremely robust. As and when we all start travelling again, you'll have no worries throwing this in a backpack, and the hinge is very well designed: it's easy to open with one hand, but holds the screen rigid however vigorously you swipe or tap the touchscreen.

You can pick the performance and storage you want, but there are no underpowered configurations here and the prices are competitive. The build quality is also excellent.

The 2,256-by-1,504 PixelSense display on the 13.5-inch model (201ppi) has a higher resolution than the FHD (1080p) panels common on this type of ultraportable, with truly gorgeous colours and contrast for so thin a screen. The 3:2 aspect ratio also provides extra vertical space for documents, web pages and artwork. Microsoft doesn't include a pen, but the Surface Pen (£99.99/$99.99) works on the touchscreen, although it's a little awkward to turn the laptop sideways and draw on the screen.

The Dolby Atmos-capable speakers are hidden under the keyboard, and while the bass won't rattle your chest if you're gaming, there's plenty of volume: music and videos -- as well as your colleagues on a Team or Zoom call -- sound pretty good. There is a fan, but it's extremely quiet.

Unusually, the SSD is replaceable, although that's more for replacing a damaged drive (and going through corporate data destruction policies) than for upgrades. The ports can be politely described as minimal: one USB-C, one USB-A and a 3.5mm headphone jack, plus the usual magnetic Surface Connect power port (which means you don't lose a USB-C port to power and can continue to use older Surface power supplies if your organisation has those). For wireless connectivity, there's Bluetooth 5 and the latest Wi-Fi 6 (802.11ax).

There's no rear-facing camera, just the front-facing 720p webcam (average resolution but decent image quality and colour reproduction), and the Windows Hello biometric camera for fast facial authentication. The Surface Laptop 4 wakes even before you get the clamshell open, thanks to a sensor that detects the screen opening, so you're getting into Windows very quickly -- and most other things on the device are just as fast.

We're used to thinking of the Surface Book as the performance model in the Surface line-up and the Laptop as a more lightweight system. That's certainly true when it comes to weight and heft: the 13.5-inch Surface Book 3 weighs 1.5kg, or 1.9kg for the 15-inch model, while the Surface Laptop 4 is thinner and lighter at 1.3kg and 1.5kg respectively. But the (slightly customised) AMD Ryzen 7 4980U CPU has 8 cores and 16 threads versus 4 cores and 8 threads on a Core i7-1065G7 Surface Book 3, and a higher base frequency (2GHz versus 1.3GHz), with Radeon GFX902 graphics rather than Iris, and the benchmarks we ran showed much higher performance.

Even on the balanced battery performance profile, our Geekbench 5 results were extremely impressive -- as long as the Laptop 4 was plugged in. Sacrifice a little battery life by changing the power profile and performance gets even better. But testing on battery rather than plugged-in dropped performance by about half for single core and GPU performance, and a third for the (still impressive) multi-core performance.

Microsoft claims 19 hours battery life for the AMD Surface Laptop 4 (and 17h for the Intel model), albeit at a very low screen brightness and with that slightly reduced performance. After working in Word, OneNote and various web pages for 45 minutes on the balanced power plan with screen brightness at 53% we had to check that the power cable wasn't actually plugged in because it was still reading 100% battery life. After an hour, once we started leaving Twitter open on-screen and playing music stored in OneDrive without copying the files down first, it finally dropped to 97%.

Over two workdays with similar mixed use, we came close to 14 hours of battery life. That's going to vary with the workload you use, and especially the power profile and screen brightness. Still, the Surface Laptop 4 will more than manage an 8-10 hour working day and keep going into the evening.

One area where the Surface Laptop 4 disappoints is the keyboard. Although the keyboard occupies an area fractionally wider than that on even the 15-inch Surface Book 3, the individual keytops are a fraction smaller. They have much less travel (although still more than a MacBook Pro and considerably more than the M1 MacBook Pro). The action of the keys feels a little deadened compared to the positive action of the Surface Book keys, so we found typing on it less pleasant and a little less accurate. That's a very personal judgement though, and some users may prefer the softer, spongier feel.

We do like the very slight rake on the keyboard from the gentle wedge shape of the base, and the three levels of keyboard backlight are useful in dark rooms. And the extremely large precision trackpad is excellent -- smooth and responsive.

We didn't have significant glare problems with the glossy screen, but we did see bright reflections from the even glossier bezels.

If you've tried and liked a Surface Laptop 3, the design you liked is still here, with improvements. If you were disappointed by the SL3's performance or battery life, Microsoft has made significant improvements without losing the slimline design or the polished feel.

The Surface Laptop 4 isn't a budget option, but it's sleek and powerful with excellent battery life and a gorgeous screen in a very portable package. What you're getting is a balanced system that's tuned to give you a sensible trade-off between performance and battery life, but if you need the extra performance you can give up a little battery life. You don't get the 2-in-1 tablet options of other Surface models, but it's a great all-rounder for the more traditional format.

Microsoft rolls out Surface Laptop 4 alongside new headsets, a webcam, and a speaker

Microsoft Surface Book 3: A beast with staying power and a price to match

The best Surface? See which Microsoft Surface PC is right for you