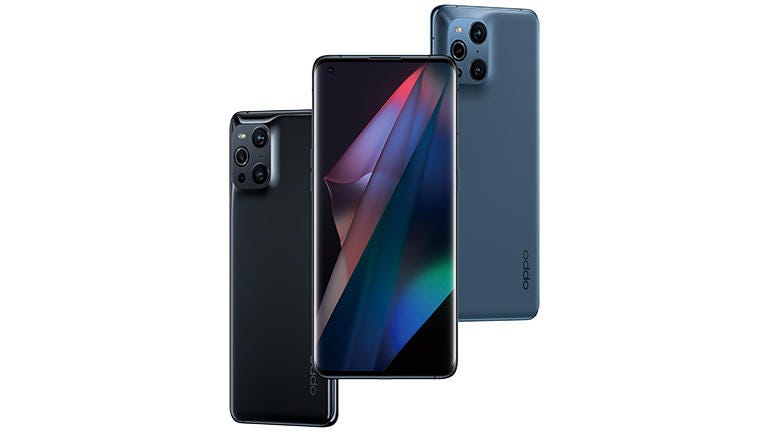 Oppo is a top-tier smartphone vendor, occupying fourth place in terms of worldwide market share in Q4 2020 according to IDC, behind Apple, Samsung and Xiaomi. This time last year I found Oppo's Find X2 Pro to be a worthy flagship, and now we have the 2021 model -- the Find X3 Pro. There are other Find X3 variants, the Neo and Lite, both of which are less expensive and less expansive. But the Pro is where it's at for cutting-edge features -- and a premium price of £1,099 in the UK (Oppo phones are not officially available in the US).

As befits a flagship handset, the Find X3 Pro is powered by Qualcomm's top-end Snapdragon 888 5G mobile platform. There is also 12GB of RAM and 256GB of internal storage. Out of the box, 20GB of my review handset's storage was occupied, leaving 236GB to fill with apps and data.

There is space for two SIMs in the caddy that pops out from the bottom edge of the chassis, but there's no option for external storage expansion via MicroSD card.

One thing I appreciated about the Find X2 Pro I reviewed last year was its orange Vegan Leather backplate. This was refreshingly different in design, with a soft-touch finish that made it grippy and able to pass the 'chair test' -- not sliding off the arm of my chair during testing.

However, it seems I was in a minority as regards the orange Vegan Leather option because it has gone, and this time around we're in glass-back territory. The IP68-rated wraparound chassis comes in two colours: my review unit was Gloss Black with an ultra-shiny, ultra-reflective, ultra-slippery finish to the backplate. It failed the chair test. There's also a Blue variant with a frosted-looking, non-reflective finish.

The backplate curves into a raised plateau housing the camera lenses, flash unit and related components. Light reflects around this curve, and somehow the depth of the camera section looks less severe than it actually is. Rest the handset face-up on a desk and the camera lenses are sitting behind the top right of the screen: tapping anywhere on the left side of the screen above about half-way creates a significant wobble and accompanying clatter as the backplate tilts down onto the desk.

The X3 Pro's display is the same size as last year's model at 6.7 inches. The resolution is 1,440 by 3,216 pixels, giving a pixel density of 525ppi, and the AMOLED panel is as bright, sharp and vibrant as any that I've encountered. The panel supports 100% of the DCI-P3 colour gamut and HDR10+, has a typical brightness level of 500 nits, rising to a maximum of 1300 nits, and benefits from an adaptive refresh rate that maxes out at 120Hz.

The tiny cut-out in the upper left corner of the screen for the front-facing camera is barely noticeable. The curvature of the screen down its long edges doesn't attract accidental taps and the in-display fingerprint sensor proved responsive and accurate.

If you find reaching across the 6.7-inch screen a challenge, Oppo has implemented its Smart Sidebar. You can pull this out from the right edge of the screen -- there's a tiny greyed-out lozenge indicating its location. Once visible, the Smart Sidebar offers shortcuts to frequently used apps. If you populate it with apps that support the Oppo split-screen feature, you can drag one out and it'll open alongside the app you're already using. Be aware, though, that not every app supports split-screen mode.

There's a choice of Vivid, Gentle, Cinematic or Brilliant colour modes, and you can manually toggle Eye Comfort mode, change the colour temperature using a slider or have it change automatically depending on ambient light, and toggle SDR/HDR modes. It's a lot to play with, but that's not all: you can also set the screen refresh rate to default to 120Hz or 60Hz, and toggle between QHD+ (1440 x 3216) and FHD+ (1080 x 2412) or have the system decide dynamically for you.

Many of the settings, as well as the Smart Sidebar, come courtesy of Oppo's overlay for Android 11, ColorOS 11.2. Its settings-based offer is seamlessly integrated with the Android settings, and it adds a great deal in an unobtrusive manner. You get a few bloatware apps, including Facebook (which can be uninstalled) and Neftlix (which can't).

Unsurprisingly, the Find X3 Pro benchmarks very well indeed. The last handset I reviewed with the Snapdragon 888 chipset was the Xiaomi Mi 11, and although the Find X3 Pro has 12GB of RAM compared to the Mi 11's 8GB, the Xiaomi phone came in slightly ahead: on the Geekbench 5 CPU test, the Oppo Find X3 Pro scored 927 (single core) and 3311 (multi core), while the Xiaomi M1 11 registered 1129 and 3704. There's not a great deal in it, and probably not enough to have a defining effect for anyone selecting between those two phones. You can check out more comparative CPU scores on the Geekbench Android Benchmark Chart.

The 4,500mAh battery performs extremely well. I found that in general use it lasted well beyond a day, and even when I spent an hour or so streaming video content at the end of a busy day, I'd still have 20% or more left at close of play. Under the PCMark for Android Work 2.0 battery rundown test the Find X3 Pro ran for 11 hours and 26 minutes, which is better than the 9 hours recorded by the Find X2 Pro but well behind the leading scores on this test (>25h). Finally, when I asked the Find X3 Pro to play YouTube video at full screen for three hours from a full charge, the battery fell by 18%, suggesting battery life of around 16.5 hours.

Fast charging is nothing new, and a flagship handset like the Find X3 Pro should have it as a staple feature. The claimed ability to deliver 40% in 10 minutes via Oppo's 65W SuperVOOC 2.0 flash charging sounds like some sort of magic, but in fact, if you do let the phone drain all the way to zero, that's on the cards: I set it charging when starting work and by the time I was ready to check the newsfeeds I'd got to almost 100%. Wireless charging (30W) is supported, as is reverse wireless charging (10W), so you can help out charge-starved friends or colleagues if necessary.

The microlens camera is a standout feature. On the device it's referred to as a microscope, and it does a fantastic job. Put it very close up to anything and it gives amazing results at either 30x or 60x magnification. Some may argue it's a toy, and you do need a steady hand to make the most of it, but it's much more rewarding to work with than some of the other third or fourth cameras with which handset makers adorn their phones.

The two main 50MP cameras capture plenty of light and detail, and produce excellent images. You can screen-tap through 1x, 2x (optical) and 5x (hybrid) zoom, and then you are in screen-pinching territory to get up to 20x (digital) zoom. On the exceptionally bright April days I happened to select for testing the camera, photos were bright and sharp in both wide and ultra-wide modes at normal zoom. In general, though, zooming was less satisfactory -- bear in mind that it's primarily digital.

The Find X3 Pro also caters for fans of macro mode shooting via its 50MP ultra-wide sensor, and it's incredibly easy to use. You don't have to select macro mode before homing in on your subject. Instead, as the phone closes in the system automatically realises what you are doing, the ultra-wide lens kicks in, and macro-level focus comes into play. There's a slight jolt in the viewfinder as the switch takes place, but this is easy to live with, and it makes macro mode shooting a simple point-and-click affair. It's a definite winner.

Video on the rear camera array maxes out at 4K (60fps), and while there are a couple of handsets that will shoot at 8K, such as the Xiaomi Mi 11, its absence here is no great loss unless you are one of the very few people with an 8K TV to view it on.

The Oppo Find X3 Pro benefits from a superb 6.7-inch 120Hz AMOLED screen, great battery life and some good innovations in the ColorOS Android overlay, as well as a superb macro camera mode. The digital zoom capabilities are less pleasing, and I'm not a huge fan of the super-shiny backplate of my review sample, although I do appreciate the camera protrusion's distinctive design. There's plenty on offer here, but the four-figure price tag may give many prospective buyers pause for thought.