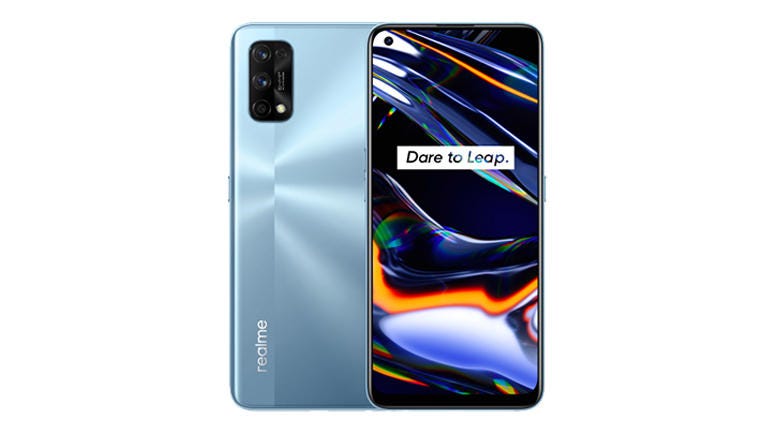 The sub-£300 handset market is a fiercely contested battleground, and here's yet another handset entering the fray -- the Realme 7 Pro. And if £279 (inc. VAT) is too much for you, then you can drop down to just £179 for the entry-level Realme 7.

If you choose this phone, you won't look like someone toting a budget handset. The back and sides might be plastic, but the back feels solid and is nicely designed, with the deep blue of my review sample looking rather stylish. It doesn't have the full-on reflective, light-refracting finish that the images on Realme's website suggest; still, there is some light-play here, and the unpretentious look-and-feel is rather refreshing. The back is also more tactile than many handsets -- less slippery in the hand. There's a version with a silver back if you prefer something a little brighter. Elsewhere, there's a tiny highlight of gold on the power button on the right side, while the two left-side volume buttons are pure blue.

Materials and colour choices are plus points, but the off-centre camera lozenge protrudes a fair bit, which means it wobbles when laid on a flat surface and the screen is prodded. Ergonomically, centrally located camera lozenges are preferable.

Realme has splashed out on the 6.4-inch screen, which is a very nice AMOLED panel with a resolution of 1,080 by 2,440 pixels (409ppi). I found that picture quality with everything from web browsing to video viewing was perfectly acceptable. However, the Realme 7 Pro's screen has a 60Hz refresh rate, which is behind the 90Hz and 120Hz (and even 144Hz) screens seen in higher-end handsets. Although I found no fault in the Realme 7 Pro's screen, it's puzzling that the less expensive Realme 7 has a 6.5-inch AMOLED display with a 90Hz refresh rate.

The front camera sits unobtrusively in a tiny punch-hole on the top left of the screen and can be used for face unlock. Alternatively, you can use the in-screen fingerprint reader -- a welcome feature on such an inexpensive handset. Bezels around the screen are unobtrusive, but hardly minimal, especially at the bottom -- the screen-to-body ratio is 82.6% (although Realme's spec sheet claims 90.8%).

There is a stereo sound setup that combines one speaker on the bottom of the handset with the earpiece grille above the screen. It's a little on the tinny side for my liking, but there's plenty of volume. There is a 3.5mm audio jack on the bottom edge.

Powered by Qualcomm's mid-range Snapdragon 720G chipset with 8GB of RAM, the Realme 7 Pro is no slouch. Under the Geekbench 5 CPU test it scored 576 (single core) and 1790 (multi core) -- just behind the £379 OnePlus Nord (620 and 1951 respectively). Check out the Geekbench Android Benchmark Chart for more comparisons.

There is 128GB of internal storage, with 15GB of that consumed out of the box, leaving 113GB free. You can expand on that via MicroSD, and you don't have to sacrifice one of the two SIM slots to do so. Wouldn't it be nice if more handsets were that flexible? But note, this is not a 5G phone, there's no IP rating for dust/water resistance, and NFC is not supported.

The Realme 7 Pro runs Android 10 rather than Android 11, and there's a bit of software bloat: WPS Office is installed, as is Facebook, but both can be uninstalled. Realme also duplicates some Android standards, providing its own file manager and photo app for example, neither of which can be uninstalled.

There is a dedicated area for gaming, called the Game Space. Add games to this and you can then adjust settings such as power usage and incoming calls for a more personalised and immersive gaming experience. Even without using this, I found gaming to be a pretty smooth experience.

The Realme 7 Pro has a 4500mAh battery that performed well. Playing 3 hours of YouTube video from a full charge, it lost 16% capacity, and the PCMark for Android Work 2.0 battery life test saw it last for 16 hours and 45 minutes. That's not too shabby at all, especially as the Realme 65W SuperDart charger can deliver a full charge in 34 minutes.

The RealMe 7 Pro has a lot going for it where it matters. An AMOLED screen, good battery life with fast charging and strong performance are all plus points in a sub-£300 phone. Add in a robust, understated industrial design, and this is definitely a budget phone to consider -- unless you need 5G.