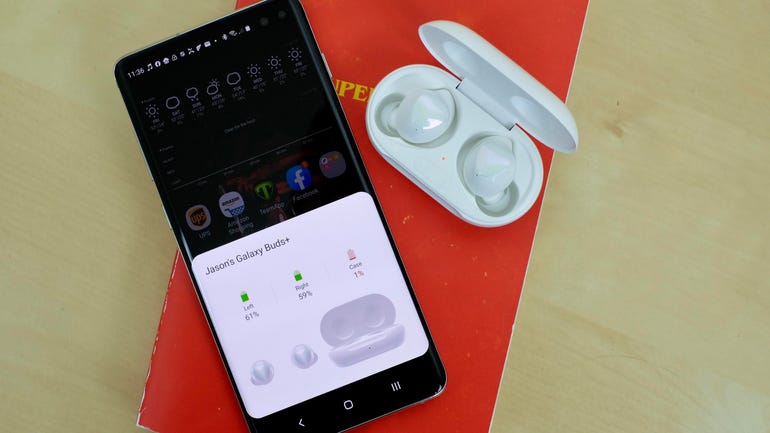 Alongside the Galaxy S20, Samsung also announced the second-generation Galaxy Buds Plus. The wireless earbuds are a follow up to last year's Galaxy Buds. Samsung has extended the battery life, improved the sound, but kept the outside of earbuds the same.

I really liked last year's Galaxy Buds and had hoped Samsung would add active noise cancelation to the second generation earbuds. However, that isn't the case. The company did, however, add iPhone compatibility thanks to a dedicated app.

Better yet? The Galaxy Buds Plus are a reasonable $149. The standard Galaxy Buds are still available for $129.

Do Samsung's latest earbuds earn their Plus name? Let's take a closer look.

The Galaxy Buds Plus are completely wireless earbuds and look virtually identical to last year's Galaxy Buds. In fact, they're the same exact design -- right down to the same size -- except the touchpad on either earbud has a slightly more glossy finish to it.

The touchpad is what you use to control music playback or trigger your phone's personal assistant. There's also an experimental Labs feature that turns the outside ring of each earbud into a second touchpad, letting you control the volume up and down with a double-tap. Samsung also added the ability to launch Spotify with a long-press on an assigned touchpad.

The charging case has a glossy finish, similar to the new-look touchpad on the earbuds. There's a USB-C port on the back of the case for charging it, or you can use a wireless charging pad. Of course, that also means you can use Wireless PowerShare on any compatible Galaxy phone to charge your earbuds while on the go.

For me, the headlining feature of the Galaxy Buds Plus is battery life. Not to discount the extra speaker and microphone, Samsung was able to nearly double the earbuds' battery life from six hours to 11 hours without increasing the size of the earbuds themselves.

Samsung achieved this by putting a larger battery inside each earbud, and using a new chip that optimizes connections and power.

I haven't hit the 11- hour mark with the review sample I received, but that's only because wearing earbuds for the majority of my day just isn't possible. However, I have worn them for several hours throughout a day and the battery was barely impacted.

As for sound quality, I have zero complaints. The eartips preinstalled on Galaxy Buds Plus form a solid seal with my ears, and barely let any sound in (or out, for that matter). There's ample bass, without being overbearing, and the adjustable equalizer lets you fine-tune the sound quality to your liking.

A third microphone has been added to improve ambient mode and your sound quality on phone calls. When using the Buds Plus for calls, I was told I sounded clear and without any issues.

As for ambient mode, I think it's one of the most underrated features we've seen added to wireless earbuds in the past year. You can activate ambient mode with a long press on Buds Plus' touchpad, and it will allow some noise in from your surrounding environment. Using the app, you can choose between three different ambient noise levels, letting in as much noise as you want.

I used ambient mode to listen for the barista to call my name when my coffee was ready at a Starbucks. Doing so allowed me to continue listening to music and working, without having to either remove the earbuds until my drink was ready, or miss her calling my name because I couldn't hear her.

Ambient mode is also convenient when walking along a busy street, or in an airport when you need to listen for boarding announcements.

New with the Buds Plus is an iPhone companion app. The standard Galaxy Buds always worked with the iPhone, but were more or less treated as a regular Bluetooth device.

With the addition of the app for the Buds Plus, users can adjust settings, check battery levels, and install updates on the earbuds.

If you own the original Galaxy Buds, I have some bad news. The Galaxy Buds Plus iPhone app won't work with the standard Buds. According to Samsung, there's a new chip inside the Buds Plus that makes using the app possible.

The experience between the iPhone app and Galaxy Wearable app for Android devices is nearly identical. Android users have a few extra options, such as a dedicated game mode that reduces latency, and the ability to hear which app a notification is from through the earbuds, but otherwise -- iPhone users aren't missing out on much.

Ambient mode, Samsung's Labs feature with experimental features, touchpad settings and an adjustable equalizer are all present in the iPhone app.

This, of course, begs the question: Should iPhone users get the Galaxy Buds Plus instead of AirPods? While the Buds Plus have exceptional battery life and impressive sound quality at a price point of $149 -- the AirPods and their deep integration with iOS and the rest of Apple's ecosystem tilt the scale in their favor.

Despite a new iPhone app and expanded features on another platform, the Galaxy Buds Plus are a better fit for Android users.

With the Galaxy Wearable app, you get quick pairing, notifications, and a fun popup that shows battery levels when you open the charging case next to your phone. These are all small features that Apple has given AirPods users, and it's nice to see an option for Android users that not only sound good, but have unbelievable battery life.

Without a doubt, the Galaxy Buds Plus should remove any AirPods envy for Android users.