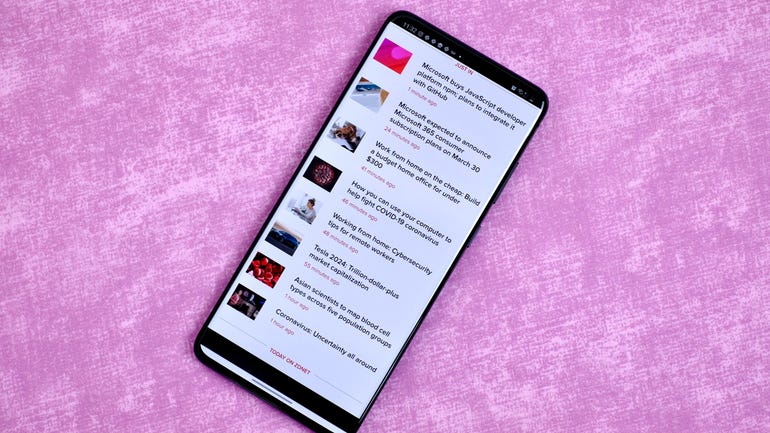 For the last few years, major smartphone makers like Samsung or Apple have released different variants of the same phone model. Samsung released several models of the Galaxy S10 in early 2019 and followed the same blueprint with Note 10 at the end of the year. Apple did the same with the iPhone 11 lineup.

Most of the time, however, the differences are limited to screen size or an extra camera. With the Galaxy S20 lineup, the typical differences are there: The S20, S20 Plus, and S20 Ultra all have different screen sizes, and the Ultra has a robust camera system, but this is the first time I can recall feeling like all three models are completely different.

So, how do you decide which model is right for you? Especially with the starting price point is $999 for the S20? After using the S20 Plus for over a week, and reading through Matthew Miller's S20 Ultra review, I think the S20 Plus is the Galaxy phone to get.

The Galaxy S20 Plus is well designed, fits easily in my hand, and doesn't feel cumbersome or too big despite having a 6.7-inch display. The display has a centered hole punch cutout for the front-facing camera. With an almost bezel-free design, the screen of the S20 Plus leaves plenty of space to use apps in split-screen mode to, for instance, copy information from an email to a spreadsheet or word doc.

After setting up the S20 Plus, I immediately turned on Android 10's gesture navigation, which ditches the traditional three-button navigation bar at the bottom of the screen, giving me even more real estate to use. Getting used to using gestures took about a day, but now I have no issues swiping in from either side to go back, or swiping up to go to the home screen (among other gestures).

There are only two -- well, I guess, technically three -- buttons on the perimeter of the S20 Plus. All three are on the right side of the phone, with a volume rocker near the top, and then a sleep/wake button that doubles as a power or Bixby button. After over a week of use, I still am not used to the new arrangement. Every single time I wanted to turn the volume down while listening to music or watching a video, I hit the sleep/lock button instead. The close proximity of the buttons and muscle memory take equal parts of the blame.

The Quad HD+ Super AMOLED display has a potential resolution of 3,200 x 1,440, as all of Samsung's flagship Galaxy phones have for the past few years. Outside of watching a high-res video, I can't tell the difference between that and the FHD+ setting of 2,400 x 1,080 pixels. I left my review unit on the standard FHD+ setting, and, as is typically the case for Samsung, the display looked stunning. Colors are bright, vivid. and not over-saturated. Blacks are dark and crisp.

Here's a specification rundown for the S20 Plus:

Along the bottom of the phone is a USB-C port that's used for charging and data transfer. The headphone jack is officially gone from Samsung's flagship lineup now. Included in the box is a pair of USB-C headphones, however. Or you can pick up a pair of the new Galaxy Buds+, Samsung's wireless earbuds.

On the back of the phone is a rather large camera array. It follows the same core design as the S20 Ultra, but at least in pictures, it looks smaller. I haven't seen an Ultra in person yet, so I can't compare.

There are a total of four cameras on the back of the phone, one of which is a depth sensor.

A lot has been made of the S20's new 120Hz display, and rightfully so. That's double what previous Samsung phones could do, and double that of Apple's iPhone lineup. A smartphone screen that's capable of refreshing at up to 120 frames per second is incredibly impressive. On a 120Hz display, everything just feels faster. From scrolling through Gmail to swiping between multiple apps, there's an overall smoothness that I haven't experienced on a phone.

On the S20 Ultra, reports have been mixed. Miller was able to get through a full day with 120Hz turned on, but CNET's review saw battery life fall short of a complete day.

My initial plan was to turn on 120Hz, test the phone for a few days, then switch to 60Hz and compare battery life. However, the battery life on the S20 Plus has been so good that I don't see any reason to switch. I've been able to use the S20 Plus all day with zero worries about battery life. In this screenshot, I had 4 hours and 30 minutes of screen on time and the battery had just under 40% charge left. That's on par with what I get from the iPhone 11 Pro Max. Of course, with 60Hz turned on, battery life will be even better.

The entire S20 lineup supports 5G; a first for any flagship lineup of smartphones. They aren't created equal, however (more on that in a minute). Unfortunately, I wasn't able to test the 5G capabilities of the S20 Plus. Not a single carrier offers 5G where I live, and as I previously covered, T-Mobile has the closest 5G network to me. Unfortunately, with everything going on right now and social distancing, I won't be able to make the drive and test it out for the foreseeable future. I do have active SIM cards from Verizon, AT&T, and T-Mobile, and plan on testing 5G once things start to return to normal. Assuming Samsung allows me to hold on to the phone that long.

Reviewers of the S20 Ultra have complained about focus issues with the camera. (Samsung has promised a software update will remedy the issues.) I was nervous that the S20 Plus would also suffer, but in my testing, auto-focus has been consistent and reliable. I have noticed an occasional macro shot that's out of focus, but that's not uncommon for any phone.

The S20 Plus doesn't have the same 100x zoom as the Ultra, and I'm confident it's not something I would want. Instead, the Plus has up to 30x zoom. The hybrid optic zoom that uses a combination of hardware and AI stops at 10x, with 20x and 30x zoom being solely digital.

Using 10x to take photos at a school play or street art a few blocks away, has returned impressive results. But anything over 10x is... not very good. The result is a blurry photo that's maybe good enough to read a sign or capture a photo at a concert, but it's nothing you'll want to print out. The above same shows that 30x can be useful to see what's on a wall, but the characters aren't as clear as they are in the 10x version, just below it. Samsung could have stopped with the 10x hybrid zoom and called it a success (because it is!), but it shouldn't have added additional zoom levels just because it could.

Samsung is once again using an ultrasonic fingerprint sensor that lives under the display. The sensor is used to unlock the phone, approve Samsung Pay purchases, and sign into banking apps. It's bigger this year, and the software has been improved for a more consistent experience. I never had an issue with the sensor on the S10 or Note 10, but so far, the S20's sensor feels faster and more reliable.

The overall performance of the Qualcomm Snapdragon 865 processor and 12GB of memory has been quick and responsive. I haven't experienced any hiccups with apps or even games slowing down or being slow to open. I've spent a lot of time multitasking on the S20 Plus, be it watching a Twitch stream while coordinating with a colleague in Slack and going through my Gmail account and the phone never skipped a beat.

As someone who frequently travels and uses my phone as a tool to stay on top of work and communication with clients, the S20 Plus has the battery life and performance that's reassuring and I feel like I could rely on.

Where the Plus fits in the S20 lineup

The Galaxy S20 starts at $999, the S20 Plus is $1,199, and the S20 Ultra is $1,399. Not a single one of these phones is what I would consider affordable or reasonably priced, but over the past couple of years, flagship phones have become more expensive, and four-figure prices are commonplace -- especially once you introduce 5G connectivity.

And, were it not for the differences in 5G connectivity, the Galaxy S20 would most likely be the model I'd recommend. However, the S20 only supports Sub6 5G connectivity. Right now, that doesn't seem like a big deal, especially with the likes of T-Mobile and AT&T broadly deploying Sub6 networks. But, as the mmWave rollout from all major carriers continues to accelerate, the S20 won't be able to connect to that network, and it's the 5G standard that delivers on the promise of incredible speeds and low latency.

The S20 Plus and S20 Ultra support Sub6 and mmWave, ensuring you'll be able to use either phone with any 5G network in the US.

The Galaxy S20 Plus is the best Android phone I've used over the last year. It offers the complete package. A robust camera setup, an impressive screen, and it has the performance to match. The addition of 5G connectivity is something that some -- maybe most? -- of us won't be able to take full advantage of quite yet, but with a phone that costs $1,200, odds are you're not planning on upgrading anytime soon.

The Ultra is more phone, in price and size, than most will ever need. The S20 Plus, however, is just right. A modest mix of cost and performance, with a dash of 5G future-proofing.

Join Discussion for: Samsung Galaxy S20 Plus review: The S20 that...