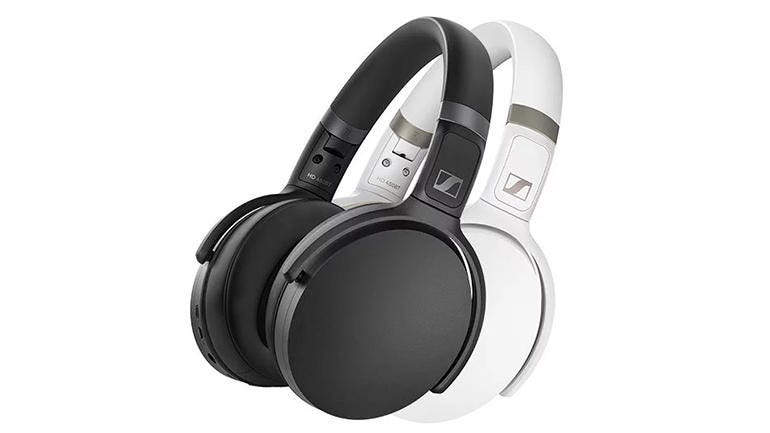 These days £159 (inc. VAT, or $199.95) is not a huge price to pay for a good set of over-the-ear headphones, and that's what you'll shell out for the new Sennheiser HD 450BT. Indeed, when faced with a choice between this headset and the £250 Sennheiser MB 660 UC which I reviewed last year, you may feel the HD 450BT offers better value for money.

The headset comes in black or white -- I tested the black version, although the white looks cooler. In either case, the headset folds down to a remarkably small size and stows in a provided soft carrying pouch which includes a small mesh pocket for the charge cable and wired audio cable.

These are rather large cans, which completely cover the ear. They are fairly light to wear, although as is often the case I found the band a rather tight fit, with the effect that the cups pushed down on my glasses. It's always a good idea to try before you buy as there are always nuances of fit that mean some headsets will suit you better than others.

All of the key controls and interfaces are on bottom of the right-hand cup. There is a connector for the wired cable, for those who would rather not use -- or can't use -- Bluetooth. Note that the headset end of the cable is a 2.5mm round-pin jack, so your favourite existing cable might not be usable. The charging port is also in the right cup: it's a USB-C connector, so you can use your phone charger for the headset too.

There are four control buttons/sliders. One doubles up for voice and music control. It's a slider that will pause/play and act as a next/previous tune selector; when you're on a voice call it will accept, end and hold a call, or can be used to reject one. There's also a volume rocker and a button that calls up your voice assistant -- it works with both Google Assistant and Siri.

Once the HD 450BT is paired with a phone, a controller app will keep you informed about battery life and let you set up the equaliser. The ability to fiddle with an equaliser from an app is likely to appeal most if you switch between music, movie and spoken word regularly. Even if you don't switch audio modes much, the ability to check battery life at a glance is worth the download on its own. Battery life is rated at 30 hours, which is plenty for the commute and working day, and probably enough for two or even three days for many people.

I was equally happy listening to radio as movie watching, and I didn't spot any latency issues. Top volume is nice and loud, and I was generally content with the audio quality. That said, I found some of the classical orchestral music I listened to lacked a bit of definition, so if this is your thing, you might want to look elsewhere.

Noise cancelling can't be toggled via the app, but only on the headset itself -- by using one of those buttons on the right cup. I'm not the biggest fan of noise cancelling -- I like to hear what's going on around me when I am out and about, so I managed without it. But for those who do want it, it does a good job of blocking external sounds.

The Sennheiser HD 450BT is not perfect: some glasses wearers might find the band a little tight and the cups a little too close fitting, for example, and there are headsets with superior audio quality. On the other hand, good battery life, a polished companion app and a reasonable price make this over-the-ear headset well worth considering.

Sennheiser MB 360 UC, hands on: A Bluetooth headset for multiple use cases