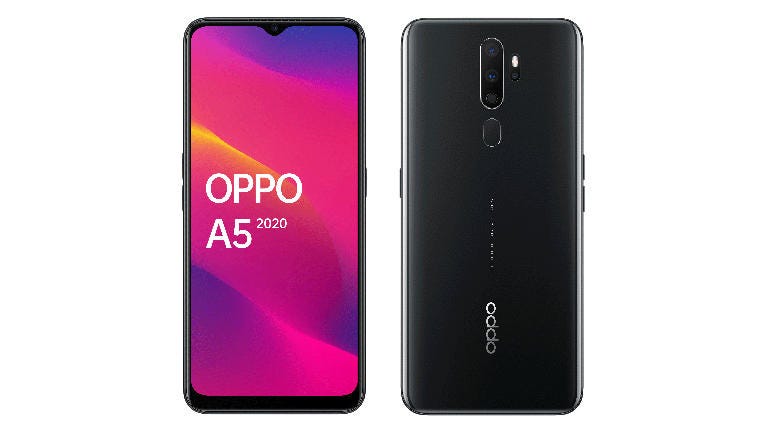 Oppo has a wide range of handsets in its portfolio. The flagship £799 (inc. VAT) Find X with its pop-up backplate housing the front and rear cameras is intriguing, but Oppo also impresses at the other end of the price range with the £329 Reno 2z, £479 RX17 Pro and £450 Reno 10x Zoom. This year I've already reviewed the £220 Oppo A9 2020, which I described as 'appealing', but has Oppo just trumped itself with the A5 2020?

At first glance, the Oppo A5 2020 looks like it should cost a lot more than £179. It's a large phone, with a 6.5-inch screen, and a tiny central front notch for the selfie camera (Oppo calls it a 'waterdrop notch') that's bang on trend. The long edges curve into the plastic back, which gives a good impression of being glass thanks to its ultra-shiny finish. Of course it's slippery to hold, and both sides are huge fingerprint grabbers -- I spent quite a lot of time cleaning this handset during the test period.

The screen protector is quite noticeable when fitted, but it's good to have; Oppo also provides a clear plastic bumper that mitigates the slippery back and helps to protect the phone.

The power button on the right side is highlighted in green, adding a touch of character to what's a pretty formulaic design. The green also extends into the camera lozenge on the back, framing one of the four rear lenses. Two volume buttons sit on the left edge below a caddy that accommodates two SIMs and a MicroSD card. Dual SIM handsets are all very well, but if you want to boost internal memory then sacrificing a SIM for a MicroSD card may be irritating. Hear you can have your cake and eat it.

There is a fingerprint sensor on the back, and face recognition login is also available if required. I found that both methods worked efficiently.

The dual speakers pump out reasonably good quality sound -- certainly adequate for gaming if a little tinny for enjoyable music listening, and there's a 3.5mm headset jack on the bottom edge too.

The screen might be large at 6.5 inches, but it lacks finesse. It's an IPS panel and so isn't as vibrant as an AMOLED. It's also a bit low on resolution, at 720 by 1600 pixels (270ppi). This means you'll see less on-screen than with a higher-resolution handset -- fewer lines of text, for example.

There's very little bezel around the screen, but still this is a big phone. It's thin enough at 9.1mm, but dimensions of 75.6mm wide by 163.6mm tall meant I couldn't reach across it one-handed. Also, as with all large handsets, it wasn't easy to find a pocket large enough to accommodate it.

Oppo mitigates the usability issue by providing a neat pop-out offering customisable shortcuts. This is pretty standard Oppo fare, and a feature of its ColorOS overlay for Android. Some will like it, others will see it as on-screen bloat.

ColorOS 6 adds some other features to Android 9. While the general appearance is fuss-free, there are some added applications that duplicate Android offerings. The Opera browser is an example. However, Oppo also adds novelties like an FM radio, and there are some neat tweaks such as: a secure keyboard that doesn't save passwords or make suggestions; the ability to lock individual apps down until they are released with a passcode; and cloning apps so that dual-SIM users can run a separate account associated with each SIM.

If you're concerned about limiting your screen time (and these concerns are growing), Oppo includes a range of Digital Wellbeing tools. You can set a Wind Down, for example, which turns the screen to greyscale and configures 'do not disturb' at a set time every day; you can also regulate daily usage time for different apps after which they will stop running.

The Oppo A5 2020 runs on Qualcomm's Snapdragon 665 chipset with 3GB of RAM. The 8-core processor is appropriate for a mid-range phone, though 4GB of RAM would have been better. There were some occasions when I had to wait for things to happen, but this was never a big problem. Geekbench 5 delivered suitably mid-range benchmarking scores. An average multi-core score of 1384 and single-core score of 313 was very close to the results from the Motorola Moto G8 Plus (1389 and 312), which is powered by the same processor and 4GB of RAM.

There's only 64GB of internal storage, which is disappointing -- especially when you consider that 18.8GB is already used out of the box, leaving just 45.2GB free. That MicroSD card slot may come in handy.

The Oppo A5 2020's huge 5000mAh battery kept the handset going for 23 hours and 37 minutes under the PC Mark battery rundown test (check comparative results here). Anecdotally it managed two days under mainstream workloads off a single charge. Even power users might manage a day between charges.

There's no fast charging here, and charging is slow -- it took about two hours to get from zero battery to 50%. So despite the long battery life, frequent charging in short bursts might be advisable, just to keep the battery topped up. As on the Oppo A9, reverse charging is available: connect another handset and the 5000mAh battery can provide it with juice if it's running low. You'll need to buy a cable to use that facility though.

The camera setup is disappointing. There's an 8-megapixel front camera and a quad camera array at the back, but this is not all it seems. There is a 12-megapixel main camera, an 8-megapixel camera with an ultra wide-angle (119-degree) lens and two 2-megapixel depth lenses. Why two? I've no idea. One is dedicated to portrait photos, but I found it difficult to discern what it actually added to portraits. Irritatingly, the ultra wide-angle lens doesn't use more of the screen for framing shots than the standard lens. The night-shooting mode also kicks in automatically rather than allowing manual configuration. Overall, images were OK, but nothing special.

The budget end of the handset market is a tough place, where compromises must be made to create a serviceable phone. In this case, the RAM, camera setup, screen and internal storage are all trimmed back. But on the plus side, there's excellent battery life, a smart industrial design, some nice added features in ColorOS and dual SIM plus MicroSD support.

Join Discussion for: Oppo A5 2020 review: Another budget big-screen...