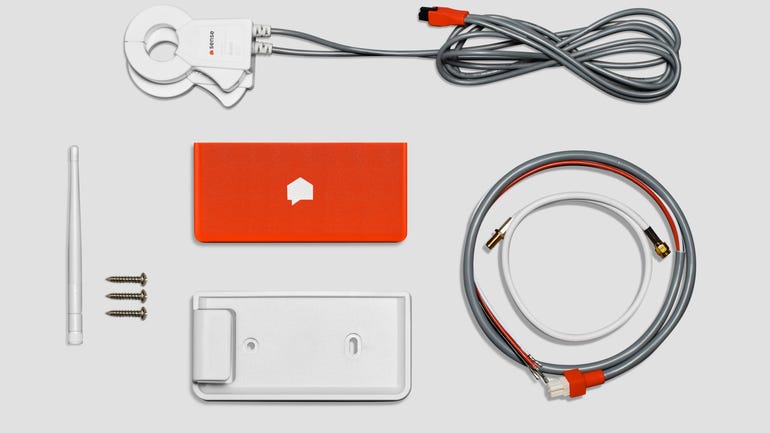 For the past four months, I've been able to open an app and view my home's electrical use in real-time. I can watch my electrical use rise and fall with each flip of a light switch or a press of the power button on a remote.

Sense -- a small device that lives inside my breaker panel -- has been monitoring and collecting my usage inside its app. The $300 device can even identify certain types of devices, like a heater or a stove, and it lets you know exactly how much it costs you to dry your clothes each month (about $8 for my family of five).

But it's not a perfect solution. You'll have to monitor your usage, make adjustments, and then monitor some more to really get the most out of Sense.

Sense is very clear in its instructions that you should hire a licensed electrician for installation. I've done enough electrical work around my home and in my electrical panel that I felt comfortable installing it.

The unit itself is designed to stay inside your panel, but if you don't have enough room, there is a mounting bracket included in the box.

The installation process requires connecting the monitor to an available 240V breaker, installing a Wi-Fi antenna, and connecting two clamp sensors to your electrical main. If you aren't comfortable with electrical work, you should hire an electrician. Installation should take less than 30 minutes. It took me about 10 minutes.

Sense outlines the installation process and any requirements for space or connections on its site.

Outside of the possibly intimidating hardware installation, the rest of the setup process is a breeze. You'll need to install the Sense app, which will connect the monitor your home's Wi-Fi network and link it to your Sense account.

All told, I spent about 20 minutes installing the hardware, creating my Sense account, and connecting the monitor to the internet.

Sense sent me its Solar bundle, which includes extra hardware to monitor a solar system's output. I'm waiting on Tesla Solar to expand to my area, so I haven't been able to test that functionality yet.

After installation, you wait

Instantly after setup, Sense begins monitoring your home's energy usage, providing a moving graph of the current watts in use, along with spikes and drops as various devices turn on and off.

For the first two or three days after installation, my wife and I were mesmerized by our usage. It was fun to watch it spike when a device like a microwave turns on, or drop-down as our heater turned off.

Over time, Sense will begin to recognize the electrical signals used by devices around your home and identify them in the app. Actually, you'll receive an alert when Sense has discovered a new device, complete with a guess as to what that device is. One of the first appliances Sense correctly identified was the heater inside our home, followed shortly after by the heater in my office (I work in a detached building).

Over time, Sense also identified our clothes dryer, some lights, coffee maker, and our stove. It even identified each burner on our stove, which I then combined into one device.

Sense's algorithms didn't always get it right. At one point, the dryer, stove, and Tesla Model 3 were all identified as a single device. I can only guess the electrical signal from all three were close enough Sense felt confident that it was a single device. However, the app allows you to go in and change the device type, name, or even delete it as a way of telling Sense to try again.

Sense's identification algorithms are constantly changing and updating, leveraging the number of devices installed, and crowd-sourcing data and signals throughout the country. In November, the company was able to expand its support for identifying electric cars, for example.

I installed Sense on Sept. 26, and almost exactly four months later, it has identified a total of 20 different devices in my home. Granted, the bulk of those are some of the biggest power users -- dryer, freezers, and furnaces -- but I had hoped it would have found my basement lights, or my kids' gaming consoles, just so I can justify every time I yell at the kids for leaving the lights on downstairs.

You're going to have to work for it

To be fair, Sense doesn't recommend users rely on the system identifying various devices and using that to monitor usage. Sure, it's one aspect of the system, but the real-time feedback and insight into your power consumption are how Sense says it can save you money and cut down on your energy use.

For all energy usage that isn't tied to an identified device, the Sense app puts it either in an Always-On or Other categories. So, you could monitor the Always-On category, and try disconnecting or turning various items off -- like a computer that's only used once a week -- and view the immediate impact it has.

You're able to set goals and create alerts to let you know when your usage hits a specific amount on a given day, week, month, or bill cycle.

For example, I know from turning lights on and off on my own while viewing the Sense app that the lights in our basement use about 128W per hour. I just wish there was a method for turning a device on and off, then labeling that spike and drop in energy use within the app. That way I could then set alerts so I know when a device is on or has been left on.

Random insights that I appreciate

Overall, Sense has been within 2% in detecting usage when compared to what my electricity company has billed me for. That accuracy provides some valuable insight into my energy use, specifically for my electric car.

I didn't take into account -- when I was figuring how much it cost me to charge my car -- is all the miscellaneous energy being used by the car, like when I would warm up the car before leaving in the morning, or each little top-off of the battery throughout the day to keep it to my specified charge level.

In the two months that Sense has been able to track my Tesla, it's added right at $50 a month to my electric bill, that's about $15 more a month than what I had been calculating based off the Kilowatt-hours I tracked. Some of that is due to charging efficiency, but most of that is undoubtedly a result of leaving the car always plugged in.

I've experimented and adjusted my car-charging routine based off of the feedback the Sense app has given me -- feedback I wouldn't have without the monitor. It'd be just a guessing game based on crude math and estimates.

If you're a data nerd, Sense is for you

At $300, Sense is one of the more expensive smart home gadgets you can buy. But it also comes with the potential to help you find rogue devices using energy and hopefully will save you money in the long run.

Don't go into owning and using a Sense thinking you'll know when every single electrical gadget or device is turned on or off in your home. That's just not how it works.

You have to be willing to do some of the leg work with this system, and for some, that's certainly and rightfully going to be a drawback. For me, I appreciate the insights and information I've been able to glean from it so far. But it will be many more months, including the hot summer months when my central air runs before I can truly feel like it's saving me money.