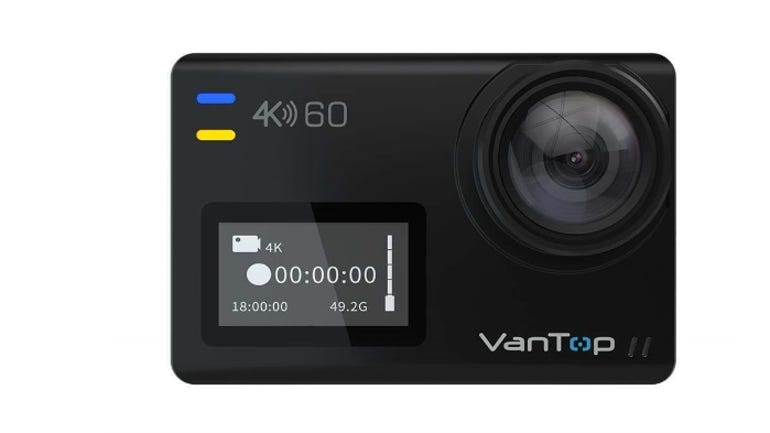 I quite liked the VanTop Moment 3 action camera when I looked at it in 2018. It was a nice, easy to use, low-cost camera with a whole host of accessories. I was interested to see how the VanTop Moment 6S compared.

The box is packed with accessories. There is a waterproof housing, one long and two short connectors, a 360-degree adaptor, a 2.4GHz remote control, a tripod mount adapter, a bicycle mount, rubber plug, USB-C cable, two batteries, and a cleaning cloth.

There is also a waterproof case touch rear door, a microphone, a helmet fixing, helmet mounts, a J-hook buckle, and two adhesive pads. You do need to buy a micro SD card (up to 128GB) to go into the camera.

It has a 2.33-inch UHD touch screen with 720 x 480 resolution and its camera has a Sony IMX377 sensor and low power consumption.

Inside the camera, a quad-core A53 ARM cortex processor is running at up to 1GHz and an Ambarella H2 chipset

The camera has a variety of functions including timelapse and slow motion. Like Moment 3, the Moment 6S has 4K video resolution at 3840 x 2160 pixels and will record images at intervals of 1/2/5/10/20/30/60 seconds and 5/15/30 minutes. Sadly, there is no night vision to capture the creatures that visit my garden in the dark.

Its 1200mAh batteries will deliver around 90 minutes of recording time at 40/60fps. I like the fact that the camera has image stabilization to make the video captures less jerky.

The touch screen was fairly easy to navigate with intuitive controls. The remote control wrist band also worked well with simple controls to start and stop video recording, take still images, or use the camera in burst mode to capture images in quick succession.

Photo mode lets you take single images, a set of photo lapse images over time, or burst mode images The camera also has an 8x digital zoom feature. To change from video to photo mode, all I needed to do was slide up from the bottom of the touch screen.

The Moment 6S can also be used as a dashcam in your car. It has a useful feature -- car mode -- that will automatically start to record after the camera has been rebooted.

The Moment 6S also has an app, so you can connect to the camera and share your videos. Search for VanTop Moment in the app store to download the app.

There are a lot of apps listed, so it might be better to use the QR code in the user guide to find the "Moment - feel this moment with VanTop Moment 6S" app to make sure you install the correct version.

Once you have installed the app, connect over Wi-Fi, add the password, and open the app to manage features of the camera, and upload images to your social feeds.

All in all, the VanTop Moment 6S action camera is a nice camera with all the accessories and fixings for a variety of activities. At under $150, it is certainly a low-cost camera, which will suit your budget if you are reluctant to shell out for a GoPro.