Full Bio
Posted in Between the Lines on November 20, 2018 | Topic: Artificial Intelligence 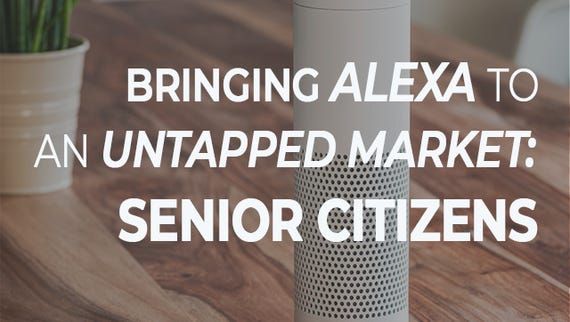 Amazon's Alexa and other voice-activated assistants are popping up everywhere these days. Alexa's user base, however, is decidedly young: A plurality of Amazon Echo users (24 percent) are between 18 and 29 years old, Forbes recently reported, while 30- to 44-year-olds make up 20 percent of its user base.

Scott Moody's five-year old company K4Connect focuses on bringing the latest technologies -- including Alexa -- to senior citizens. It's a largely overlooked market with significant potential, he recently told ZDNet. On top of that, deploying technology for older Americans and observing the way they use it can shed light on what it takes to build a successful product.

Also: Alexa's land-and-expand strategy is racking up the numbers

"There are some unique challenges associated with older adults," Moody recently said to ZDNet. When it comes to voice-activated assistants, that can include adjusting for "the cadence of [the user's] voice, acuity levels, maybe, as you get much older... the voice tone, the voice frequencies." That said, a well-designed product should create a smooth user experience for all audiences, Moody added -- even those with physical challenges, disabilities, or a skeptical attitude.

"'Technology' is a euphemism for poor design," Moody said. "When technology really works, you stop calling it technology... You call it a radio, or a TV, or a dishwasher." Or maybe just Alexa.

Moody talked to ZDNet about the market opportunity that exists for bringing Alexa and other tech to seniors, how is company is reaching that market and the insights they've gained so far. Here are the highlights of that conversation:

"I think a lot of people, when they talk about seniors or older adults or people living with disability, they talk about monitoring," Moody said. "But as I joke with people, at roughly the age of two years-old, you stop like being monitored, and it doesn't change as you get older. Really, it's how do you empower them to live a more independent life, live a healthier life, and a more connected life? It's all around this first-order value to the people we serve versus simply 'monitoring.'"

"The way I look at it is, my daughter's grandmother does not wear the same clothes as they do -- which honestly, we're pretty thankful for, but that doesn't mean she doesn't like clothes. She just wants clothes that are tailored for her, that are comfortable, that fit some utility in her life. So what we find is if you design the technology so that they find it easy to use, but more importantly, adds value to their life... then they actually do use it."

How K4Connect reaches a growing population of seniors

As many as 1.4 billion people in the world today are either over the age of 65 or are living with a disability, Moody said. There are already 23,000 senior living communities in the US, and they're growing at a rate of around 5 percent to 10 percent a year because of the aging US population, Moody said.

K4Connect aims to bring older adults and people living with disabilities "the best technologies out there, whether they're home automation or health and wellness-oriented devices -- it could be applications, it could be services," Moody said.

The company provides a multi-modal software platform that integrates it all into a system with a single UI, incorporating voice, touch and eventually capabilities like gesture, Moody said, "so that the older adult or the person living with that disability finds it easy to use."

K4Connect's first service, K4Community, delivers that platform to senior living communities. Community administrators can integrate whatever wellness, connectivity or automation products they want. The residents can use the platform for things like signing up for community activities, ordering food or requesting transportation. In addition to enabling tech for senior community residents, K4Community provides relevant data to caregivers and community staff.

"The focus of the company is serving and empowering that older adult or personal living with the disability," Moody told ZDNet. "It's all around making their lives... simpler, healthier, and happier. Simpler is those home automation things; healthier is the wellness devices and services; and of course, happier is all around connectivity to the community around them."

Next year, K4Connect will be introducing a product called K4Home, which brings its platform into seniors' homes.

Building tech that's intuitive and easy for everyone

While older adults may have "unique challenges" when it comes to using certain technologies like voice-based UIs, Moody said a well-designed product will take those challenges into consideration.

K4Connect recently announced an expanded partnership with Kisco Senior Living to integrate Alexa with K4Community. After working with Amazon on the integration, K4Connect will roll it out to Kisco's 22 communities across the country. Prior to launching that rollout, K4Connect has been quietly piloting the new integration, with some encouraging findings.

"The number of inputs or touches into K4Community go up significantly when voice is actually added," Moody said. That wasn't too surprising, given the ease of using voice-based UIs, he said. "I think people, whether you're 25 or 45 or 85, actually use some of their home automation devices more -- like turning on a light or changing a thermostat -- than they would if it was just touch and they had to go find their phone and pull up an app."

Yet the typical Alexa user tends to use the Amazon assistant for a few key functions -- primarily playing music. By comparison, K4Connect's pilot deployments suggest that the typical senior living community resident uses voice for a wider range of use cases, Moody said.

"What we see is, [the list of use cases] doesn't curtail so quickly, that the older adults actually use more things consistently," he said. "These are [use cases] that you don't normally have at home: What's on the menu for tonight? What time is lunch? What time is this activity? Sign me up for this. But there's other things like home automation: turning on the light, changing the thermostat."

The data K4Connect provides to organizations like Kisco Living serves various purposes: Information about the residents -- such as whether a resident is getting up more often at night to use the restroom -- can offer insight into their healthcare needs. Other information, like what foods residents order the most, can help improve hospitality services.

Meanwhile, IoT implementations can help a facility keep their operation costs down. Eventually, "it'll be more oriented toward AI... predictive analytics and predictive health," Moody said, adding, "We're not quite there yet."

Join Discussion for: Bringing Alexa to seniors: What can it teach...