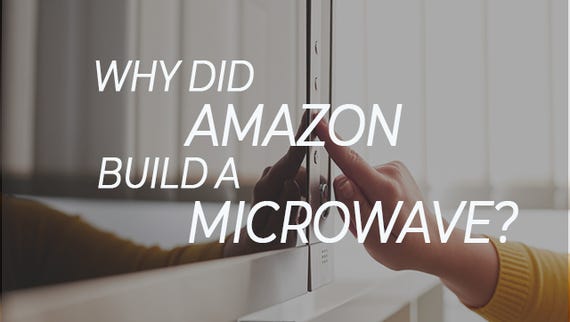 Why did Amazon build a microwave?
Watch Now

Alexa has been added to well-established products like Bluetooth speakers and microwaves and new categories of products such as the Echo Auto or Echo Spot. But its value can be particularly strong for a product that brings other kinds of innovation into the market. One product betting on that is Silo, a "vacuum-sealing container system." The product recently hit Kickstarter -- where it has raised over $350,000 early in its campaign, even though it's creators say it already is privately funded well enough to bring product to market next year.

Whereas many food vacuum systems rely on bags, Silo preserves food in proprietary plastic storage container available in a few different sizes. Users pop them into a base where they have most of the air removed from them. The magic happens in a column in one corner of the containers that controls the air flow and a release switch at its top. The vacuuming process takes about 10 seconds.

Then, the smarts come in: Once a container is prepared, Silo asks you to tell it what is being stored (OK, so it's not smart enough to know by itself yet.) Equipped with this knowledge and the weight of the filled container, it can answer subsequent requests through Alexa for how much food is left and estimate how much longer it should be edible for. For example, asking, "Alexa, is the chicken still good?" might result in an answer saying that the chicken should be good for at least five more days. Unlike vacuum freezer bags, Silo containers are designed to be accessed relatively frequently; the company recommends resealing the containers after taking out some snack items, at which point Silo weighs them again and updates how much supply is left.

The Silo device isn't just Alexa-compatible. It's a full-fledged smart speaker that can play songs from Spotify or do just about anything else an Echo can. One would think that audio would be an afterthought in a food preservation product, but the Silo team says it has turned its speakers with the help of audio brand House of Marley (number of loves preserved: One). Silo's developers market this level of integration as one way of conserving the limited real estate on the kitchen counter, as it can completely replace an Amazon Echo. In addition, Silo flips up into a space-saving vertical orientation in which all the Alexa features are still active.

Silo isn't the first Alexa-connected food storage kitchen gadget to pass through a Kickstarter campaign. Back in June, Ovie attracted about $64,000 (beating its $40,000 goal) for its Smarterware tag-based system heavily focused on food tracking. As such, it included components such as clips for bags of chips and such. While it does not offer Silo's level of food life extension, it doesn't require the use of containers for each item, either. For example, an Ovie tag can be affixed to a typical Chinese food container or wrapped around a jar. Ovie's campaign estimate for product delivery is next February, which would beat Silo's estimated time to market by nine months -- assuming both products meet their shipping estimates.

But more so than Ovie and unlike some high-end smart food preparation products that focus purely on experience or personalization, Silo can be justified with a return on investment. That said, there is a food quality benefit issue, as food stays fresher and thus tastes better longer. Also, while Silo isn't actively marketing it in its campaign, it can also be used to marinate foods.

Silo is being offered to backers for $175 after the expiration of a $165 early bird price; that includes the Silo base and four food storage containers. That's competitive with premium bag-based units. The company expects to drive revenue by getting consumers hooked on the containers so that they buy more of them to save and store all kinds of foods and liquids. And while it is far from an airtight way of measuring consumption, Silo can serve as a proxy for it in certain cases. That could become useful data to consumers or valuable data to food producers and supermarkets down the line.

These new kitchen gadgets will change how you cook, store and dispose of your food

Bringing apps to your scraps

12 ways to use Alexa in the kitchen

Amazon's Alexa voice assistant is helpful in many places around the house. Here are 12 ways Alexa can help make your time cooking easier and more hands-free.

Join Discussion for: Silo brings Alexa to the kitchen to save...