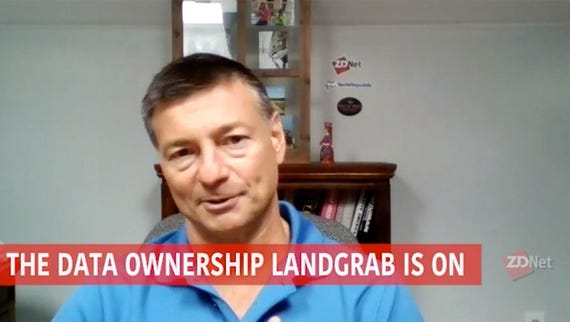 The data ownership land grab is on
Watch Now

The data ownership land grab is on

If data is the new oil, then there is going to be a land grab and plenty of squabbles over who owns it. And the battles are just beginning.

As the cloud becomes more commonplace and data from sensors populate Internet of Things (IoT) streams, there will be a scrum of who has access and owns what information. Surely, you own your customer data right?

Maybe. You own it as long as your technology partner makes it easy for you to access, integrate, and innovate. The hopes and dreams of the so-called API economy ride on companies providing access to data and an ecosystem built around sharing. The reality is that IT vendors as well as operational technology vendors may control your company's data. Data Kumbaya is all fun and games until there's money to be made.

These incidents are becoming increasingly common and the stakes are high (data is at the center of every digital transformation effort). There will be tolls to access your own data if you don't negotiate ownership rights early in the buying process. Meanwhile, you'll be expected to contribute your data (anonymized of course) for access to benchmarked information.

In addition, there are more than a few vendors these days who in their weaker moments talk about data under management. You swap out the names and you'd think you were listening to a financial services giant talking about assets under management.

The twist isn't that surprising when you consider your most valuable asset is your data.

To take that financial services analogy further, today's data ownership landscape is like a bank holding your money and then throwing up roadblocks when it's time to access it.

Now, we all know you thought you owned your data. And you do, kinda. But there's a lot of gray area. As the Internet of Things proliferates, the data ownership issues are going to balloon.

Gartner analyst Kristian Steenstrup raised the issue at the research firm's Symposium/ITXpo. The gist is that industrial equipment now captures vast amounts of performance data. Who owns that data? The manufacturer of the equipment, the maintenance provider, or the company that bought it?

Equipment data will be the first battleground over ownership. But as the Internet of Things and customer data blend, every technology buyer will be affected.

Turns out every vendor is going to have a stake in the data. IT vendors will use their platforms to analyze and repackage data. Operational technology players such as GE, Siemens, Bosch, and others will want the data from an asset to create a digital twin. Your company will want the data to save money and become more efficient.

Here's where things get tricky: The assets in the field are creating data that can become new businesses. Data from the airline engine will become more valuable than the engine.

In the old world, the maker sells an asset to an owner, who then has a financial interest as well as the asset. Now, there are as-a-service models, data brokers, intelligence networks, and money to be made from digital twins.

The legal stakes and standards aren't fully formed, and questions about data ownership will proliferate, said Steenstrup. Add it up and data ownership and value will be part of every contract negotiation.

Join Discussion for: Do you own your data and have free rein?...