In the wake of the Notre Dame Cathedral fire, digital scans offer hope for restoration 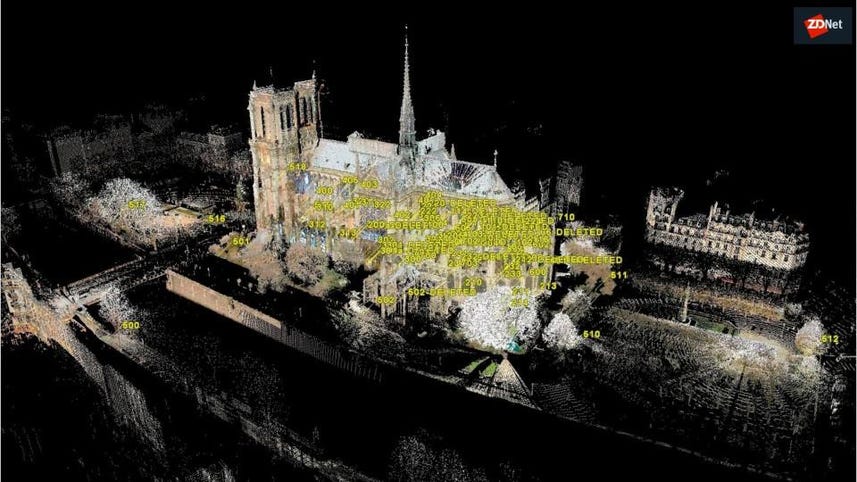 The world watched in heartbreak on Monday as the Notre Dame Cathedral in Paris was engulfed in flames. Countless people across the globe recalled visiting the cherished landmark -- they shared digital images of the cathedral online, inspiring hope it could be rebuilt with such resources. Indeed, Paris' Notre Dame Cathedral has for centuries inspired artists, photographers and others who sought to replicate its form. Among those was the late Andrew Tallon, a professor at Vassar who used laser scanning to create massive digital files that captured the cathedral down to its precise measurements.

"Can it help us rebuild? Yes, it can,"  Columbia art history Prof. Stephen Murray told ZDNet with respect to Tallon's work. "I think it's terribly important."

Digital preservation is a burgeoning field in which Murray and Tallon were pioneers -- they produced the first laser scan of a Gothic Cathedral in 2000. In 2011, Murray and Tallon co-founded Mapping Gothic France, an open-source project intended to explore the links between the architectural space of individual buildings, geo-political space, and the social space between builders and users.

Tallon also advanced the field by combining laser scans with with spherical panorama pictures, Tallon's colleague, Vassar Prof. Lindsay Cook, told ZDNet. Combined with those images, "it would look more like the skin of a building we're accustomed to seeing," she explained. Tallon created images that "his students would understand and would want to see, and that would really dazzle the eye."

"Those images are almost uncanny, they're sort of other-worldly," Cook said. "That's largely because they come from this laser scan. Underneath all the armature is the robust cloud-point data [Tallon] had amassed through the laser scan."

Tallon used a Leica Geosystems laser scanner, which as Murray explained, sends out laser strobes to measure the distance between the scanner itself and anything the laser hits. Mounted on a tripod, you can sweep an entire building, creating billions of dots of light across the structure. "You watch those dots of light come to life on your computer screen in a three-dimensional sense," Murray explained.

Murray also noted that laser scanning is a "surprisingly physical task," involving carrying the scanner to hard-to-reach spots. "It's not for the faint-hearted," he said. "It demands intense skill and patience."

Tragically, Tallon passed away in November, while he was still at work on a project related to Gothic structures. His colleagues, with the help of his wife, are now wading through his research to see what can be done with his raw data.

"As you can imagine, the data is ample," Cook said. "There are certain images that have been created, but there are all kinds of other ways you can put it together and create new renderings. The raw material is there for future renderings."

Until laser scanning emerged, photogrammetry was the most advanced way to create a precise replica of a building. Meanwhile, using an old-fashioned measuring tape "is still extremely accurate if you know how to wield it," Cook said. But laser scanning is a particularly powerful tool, Cook said, given the sheer amount of data it collects and the access it offers to the upper reaches of a building.

Still, it is an expensive undertaking, she acknowledged. "I completely understand why it isn't applied everywhere," she said. "I do hope in the future, especially as technology becomes less expensive, that it would mean more structures could do this as a preventative measure."

Laser-scanning could be especially useful for replicating landmarks that are off-limits to visitors.

"In Egypt, you might imagine one particular case where a tomb has been mostly closed off, so you are more likely to visit the digital copy that sits next to the site," Cook said. "You would actually stand inside, taking the digital into the physical world."

While he was an early adopter and a major proponent of laser scanning, Cook said, Tallon was less interested in using the technology for preservation purposes than he was in using it to better understand the history of Gothic structures.

Still, Tallon particularly cared about the preservation of the Notre Dame Cathedral in Paris. He was co-founder and a director of the US-based charity the Friends of Notre-Dame.

Cook said it's unclear whether the authorities involved in overseeing Notre Dame's restoration will want to use Tallon's data.

"Of course, it'd be available to them if they decide that's necessary," she said. "It's really wonderful the material exists so there's at least a backup of all of this data."