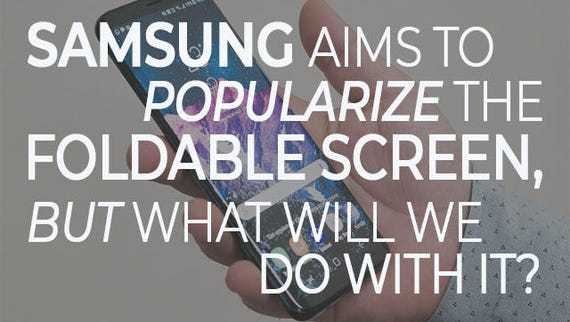 Now that Samsung has finally taken the wraps off its $2,000 Galaxy Fold, the Korean tech giant is reportedly eyeing a new opportunity to boost its display business with Apple.

A foldable Android tablet could be a winner for Samsung if the concept takes off in the way the Galaxy Note spawned an entire new category of bigger-screen but still pocketable devices.

The company right now certainly needs some of its products to pop among its diverse business, which includes memory, displays, and smartphones — none of which is performing well at the moment, partly due to supplies to Apple's stalling iPhone business.

But, as spotted by MacRumors, Korean news outlet ETNews has heard reports that Samsung Display thinks there could be a chance to capitalize on Apple's growing iPad line.

According to the report, Samsung Display presented Apple a foldable display device that was slightly smaller than the Galaxy Fold.

The Galaxy Fold has a 4.6-inch display when folded, and a 7.3-inch display when unfolded into a tablet. The device said to be given to Apple was "powered like a smartphone, has a 7.2-inch size foldable panel".

If Samsung can convince Apple to buy its foldable display technology, it could be on to a winner.

After Apple lowered its Q1 2019 guidance due to slack iPhone sales, the company reported that iPad earnings were up 17 percent to $6.7bn. iPad revenues grew twice as much as Mac sales did in the quarter, while iPhone revenue shrank $9bn to $51.9 bn.

The report notes that Samsung doesn't intend to keep its foldable displays exclusively for itself and wants its smartphone and tablet rivals to adopt and buy the technology too, noting that Huawei and Oppo also buy Samsung displays.

Samsung has reported that it will manufacture over one million foldable phones this year, but the report notes the company has plenty more to sell to others, capable of producing about 200,000 foldable displays per month or 2.4 million units per year.

Whether Apple bites at Samsung's offer remains to be seen. The company usually is a late entrant to new markets and brings products that refine what rivals have previously attempted.

However, Samsung's technology could be a timely offer for Apple, which has patented several foldable device designs and is in need of new product to boost revenues.

Mobile keyboard fans now have a new option in Fxtec's Pro1 for the same price as the BlackBerry KEY2.

Lenovo reportedly will soon be releasing a foldable $1,500 Razr-branded phone.

Xiaomi may have just come up with one of the better examples of a foldable tablet-smartphone.

Commentary: Foldables are stunning. Now if only the masses could get their hands on these cutting-edge devices.

Join Discussion for: Is Samsung talking to Apple about a foldable...