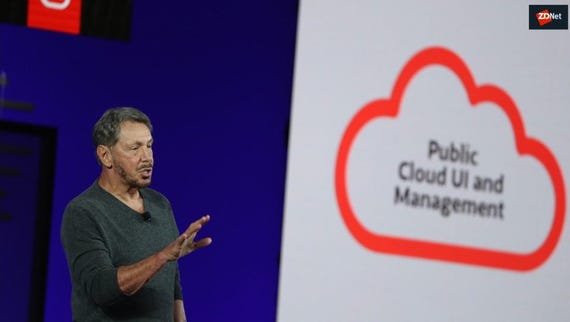 Oracle's strategy revolves around popularizing its Autonomous Database, converting application and database customers to Oracle Cloud and using its own digital transformation as a case study for enterprises.

Divining Oracle's strategy following a week-long OpenWorld 2019 conference was easier said than done. There were multiple moving parts ranging from cloud infrastructure to applications to databases, a lot of CTO Larry Ellison quotes and quips and a skeptical group of analysts questioning the company's future. Oracle's OpenWorld conference came days after co-CEO Mark Hurd took a leave of absence for health reasons and a mixed quarterly report.

Add it up, and CEO Safra Catz said Oracle is poised for revenue growth in the fiscal year ahead and this growth will be fueled by an integrated stack. In other words, Oracle is spinning the "suite always wins" mantra forward.

We are, without a doubt, the only company that can provide a fully-integrated stack, which is something we've been known for in the on-premise world. And now we can provide a secure, performant and enterprise-grade stack all the way from the infrastructure through the database with autonomous database to the applications and embedded AI in those applications and in the analytics.

Oracle's most interesting product is its Autonomous Database, which promises to automate a lot of hours spent on administration, patching, and security. To Ellison, Oracle's Autonomous Database is the headliner of the company, as well as the secret weapon to fend off threats from cloud providers, such as Amazon Web Services, Microsoft Azure (now an Oracle Cloud partner), Google Cloud Platform, and open-source alternatives.

What's unclear is whether the market is moving away from premium database offerings to good enough alternatives. In Oracle's financial analyst meeting transcript, the word "autonomous" was said 73 times.

When we talk about autonomous database, we say the word database, but it's really the whole stack. Traditionally, customers built their whole thing. They bought servers, storage, network, OS, back-up, all that stuff, they put it together themselves. When a customer gets an autonomous database from us, they get the whole stack. So that increases our addressable market quite substantially. It's one thing.

Ellison said the Autonomous Database is one element of keeping customers on the database reservation. He also questioned whether customers were leaving Oracle databases. He said:

He added that the Autonomous Database is pulling customers over. "We're seeing the Autonomous Database now of adoption rate beginning to spike. 500 new customers this past quarter, we'll have over 1,000 new customers in this quarter. It's now happening. Now it's happening. They'll take an existing data warehouse or a new data warehouse project, they'll move that over, they will -- they typically start slowly," said Ellison.

There is little question that Oracle's installed base is extremely secure, given the time, money, and operational risk of moving a legacy workload off of it. At the end of the day, there is no real ROI to that transition. However, as legacy workloads get replaced, we believe there are increasingly good alternatives to Oracle (hyperscale solutions, NoSQL, open source, etc.) and that the developer community (not many new SaaS apps are built on top of Oracle) and enterprise customers are increasingly moving in this direction.

Oracle highlighted the ongoing innovation in the database such as AI/ML and a converged database. After speaking with some customers and partners, the question is how quickly can customers adopt this technology and at what cost? While it's hard to argue against the potential value associated with an autonomous database, we believe the shift towards autonomous and OCI within the Oracle customer base will take time.

Move to the cloud

The Industry Cloud: Why It's Next The industry cloud has taken off and big businesses have been built by the likes of Veeva, Rootstock and others. Here's why the focus has allowed the industry to thrive even as giants like Salesforce, Oracle and SAP eye their turf.

Ellison said that if Oracle can move its database customers to the cloud along with its application installed base, there's an argument that the company will be the biggest cloud player. Ellison maintained that the stock market wasn't valuing Oracle's cloud potential.

We think we're going to get virtually all of the Oracle databases, which is most of the world's data. It sounds crazy, right? Because if Oracle really holds on to its database franchise and moves it to the cloud, I'll ask you, it is the most interesting question of the day, so how big is Oracle? If we hold on to our database franchise, think about all the applications that are built on top of Oracle databases. Remember, we were way bigger than IBM and Microsoft combined in the database business. Still are, still are. If that all moves to them cloud and we get it, how big are we?

Oracle internal applications will be on the Oracle Cloud, the company argued its second-generation infrastructure is winning converts and the data center footprint is swelling. "We get a tremendous leverage in technology, things you see like machine learning and digital assistants or bots; and things you don't see, infrastructure updates, reliability, security going forward. The notion of technical debt in the Oracle Cloud has basically disappeared because we sit on top of that investment that we have going forward," said Ellison.

While Oracle talked about its infrastructure as a service, databases moving to the cloud and broader services, the main driver will be software as a service. Apps will drive Oracle forward, said analysts.

Oracle CEO Safra Catz said the company's move to its own cloud proves the point that its offerings are industrial strength. Ellison added that its infrastructure cloud will ultimately give its applications an edge over Salesforce, Workday, SAP, and other competitors.

And, yes, Ellison is still a wee bit obsessed with AWS, which has said it moved from Oracle to AWS.

Analysts aren't yet sharing Oracle's enthusiasm for its cloud broadly speaking. However, Oppenheimer analyst Brian Schwartz said the growth of the SaaS business is critical to everything else.

We left impressed with the look, capabilities and integration of Oracle's SaaS applications and next-gen cloud infrastructure. To improve sentiment, we believe Oracle needs its SaaS business to grow faster. This development would convince investors that its database customers will migrate workloads and grow with Oracle since its enterprise SaaS business can pull through infrastructure demand.

Kehring, a 20-year veteran at Oracle, outlined how the company has retooled its business processes to take advantage of cloud computing. His talk at Oracle's analyst meeting highlighted the following points:

Oracle is moving from a product and licensing company to one that revolves around services and subscriptions. 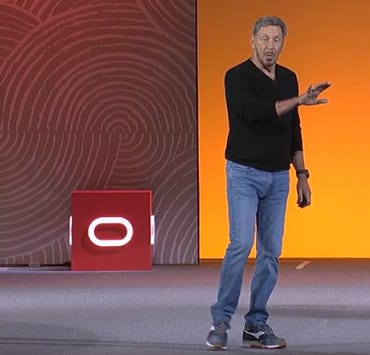 The company has largely moved its internal applications all to Oracle's Cloud. We're sort of at that point of no return where we are nearly 100% having moved all of our applications to the cloud across ERP, supply chain, HCM, CX, and EPM. It's all up and running inside Oracle. It is the platform that's powering these new business processes," said Kehring.

Oracle is aiming to tell its own story internally as well as to customers. The catch is that Oracle will need some time to change its image with customers.

Managing the Multicloud Here's a look at managing multiple cloud providers, how to play them off each other and what vendors and tools can help you manage multiple clouds.

We realized we're in a great position to share our story. We've always believed that we should, at Oracle, use our own technologies. And obviously, we've done that throughout our history. But more than that, we want to be our #1 reference. We want to be the best customer inside Oracle. We adopt first so that we can learn. We can learn and we can help the development team continuously improve. But the reality is our customers are demanding to understand, hey, how do you do it well? How do you do it effectively? How -- give me some insight into how this works, and that led to the Oracle@Oracle Experience.

Much of the Oracle@Oracle effort revolves around content that can evangelize Oracle Cloud to the sales field as well as customers to outline the returns such as efficiency, faster decision-making and the ability to be agile vs. the competition. Oracle's Kehring said the plan is to take Oracle@Oracle on the road beyond OpenWorld to open a dialogue with customers.

In a nutshell, Oracle@Oracle is part of a new branding effort for the company. At OpenWorld, Oracle tried out some branding with just an "O" and there was less red everywhere. Yes, Oracle was front and center, but less in your face about it.

Catz outlined why a new brand spin was necessary.

Join Discussion for: Oracle exits OpenWorld 2019 with a lot riding...