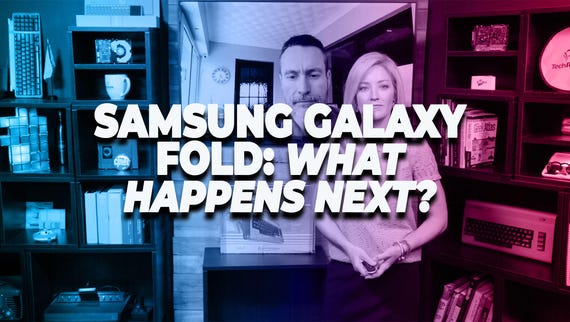 The Galaxy Fold could be the beginning of the end for smartphones, according to Samsung's mobile boss DJ Koh, who predicts 5G will shift the tech industry and consumers towards wearables.

Koh made the prediction at a media day attended by The Independent in Seoul, South Korea, where Samsung explained what went wrong the Galaxy Fold and where it's currently at.

As readers here would know, the $2,000 Galaxy Fold flopped out of the gate after reviewers quickly broke the displays. Samsung has not yet announced a date for its rerelease.

Koh admitted it was an "embarrassing" launch and that in Samsung's race to be the first with a foldable phone he "pushed it through before it was ready". But he reckons the foldable, with its flexible displays, will set Samsung on a new path beyond smartphones.

Kang Yun-Je, head of the Samsung Electronics design team, said the reason for building a foldable phone was that "smartphone design has hit a limit".

He predicts a "seamless" shift away from smartphones so that "in five years or so, people will not even realize they are wearing screens".

For companies like Apple, Samsung and Huawei, which have made billions from phone sales, that shift could be a make or break moment.

"[The] previous 10 years, it was an era of the smartphone," said Koh. "From this year, maybe a new era is opening because of the emergence of the Internet of Things, 5G, AI, and all these technologies mingling together. The new era is in front of us."

Koh reckons the foldable category will "last a couple of years" but that with the arrival of 5G and the Internet of Things, "We must think rather than smartphones, we must think smart devices".

"Smartphones may decline but new devices will emerge," said Koh.

That future of new devices is already here to some extent, but Samsung is lagging way behind Apple in the growing market for smartwatches and has no share of the booming smart speaker market.

The company had planned to launch its Galaxy Home smart speaker in April and in May told CNET it would launch the Galaxy Home in the "first half of 2019", which it also missed. The latest Galaxy Home launch date is the third quarter of 2019.

Koh sees Samsung's future in interconnected and multi-screen smart devices that help people carry out tasks seamlessly as they move between home, the car, and office. That could be good for Samsung's huge display business and give it more places to put its flexible displays and electronics.

As for the Galaxy Fold's new release date, Koh said it will happen "in due course". He added that Samsung is currently testing more than 2,000 of the devices and has found "issues we didn't even think about".

More on Samsung and smartphones

Join Discussion for: Samsung: You won't be using smartphones in...