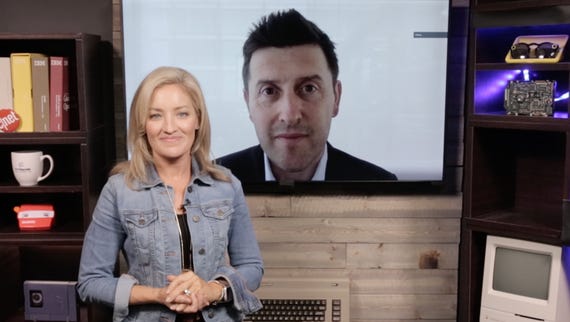 Folding phones, Android, and what it all means for Microsoft
Watch Now

The biggest surprise to come out of Microsoft's hardware event this week was not the new Surface devices -- not even the dual-screen Neo laptop, intriguing though it is. No, the most unexpected arrival was a Microsoft smartphone, running on Android.

The Surface Duo has two 5.6-inch screens, and is due to arrive late next year. Foldable smartphones may be the 'next big thing', but, in contrast to rivals like Samsung and Huawei, Microsoft has gone with two screens linked by a fancy hinge rather than one bendable screen. That's probably a wise move, given the teething troubles Samsung experienced with its Galaxy Fold. Perhaps a dual-screen device of similar size might find favour with a business audience: big enough to work on, small enough to fit in a pocket.

SEE: What if Microsoft had invented Android?

Of course, Microsoft has plenty of history when it comes to smartphones, stretching back a couple of decades, but it has never really managed to make a breakthrough. Most notably, and expensively, Microsoft bought Nokia's smartphone business in 2013 for €5.44 billion, with the aim of breaking back into the phone market. But the company quickly realised it couldn't win against Android and iOS, and ended up slashing thousands of jobs and writing off more than the total cost of the acquisition just two years later.

The last vestiges of that Windows-based smartphone dream are about to fade away as Windows 10 Mobile goes out of support in December this year.

For a long time it seemed that Microsoft had concluded that smartphones was a two-horse race that it couldn't even join, let alone win. Instead of trying to scale a version of Windows down to the smartphone, it would just provide its apps and services on top of Android and iOS.

READ: Windows 7 vs Windows 10: The next big challenge

But it seems that Microsoft just can't leave smartphones alone. Bill Gates recently said his biggest mistake at Microsoft was not creating a platform like Android (although there are plenty of reasons why that could never have happened).

So what has changed?

The decision to make an Android smartphone more than anything else reflects Microsoft's changing priorities. The Surface brand is a now a success, generating over a billion dollars in revenue per quarter. Perhaps the brand is strong enough that there is now demand for a phone-sized Surface device, even if it doesn't run on Windows like the rest of the line. I'm not entirely convinced that's the case, but there will be some enthusiasts who will want to be Surface users, from handheld device to massive collaboration screen.

The other reason for a Surface phone is the success of Microsoft's app strategy, which has basically ensured that, even if you aren't using a Windows device, you can still get access to a wide range of Windows services. Microsoft, as my colleague Mary Jo Foley points out, already has over 150 apps in the Google Play app store. Having a phone to showcase those apps makes sense and may even encourage more developers to experiment with new versions that take advantage of those dual screens.

Supporting those two strategies is a higher priority than trying to make Windows smartphones happen again. In fact, it might be a higher priority than promoting Windows. Microsoft has come a long way since it was 'the Windows company': now it's entirely possible to see it as a cloud computing and productivity apps company too. Perhaps that's why the Duo is being shown off so far ahead of its launch -- to emphasise that Microsoft is trying to take a different approach.

As Microsoft CEO Satya Nadella told Wired: "The operating system is no longer the most important layer for us," he says. "What is most important for us is the app model and the experience."

None of that means Windows is going away -- it's still a vast profit machine that ties together all the rest of Microsoft's businesses. But Microsoft's willingness to create an Android phone shows just how far the company has rethought its strategy in the last few years.

At Surface event, Microsoft's vision for dual screens, productivity was compelling, but can it execute?

Microsoft launched a phone and made me laugh

Join Discussion for: Microsoft's Android shock: What this new...