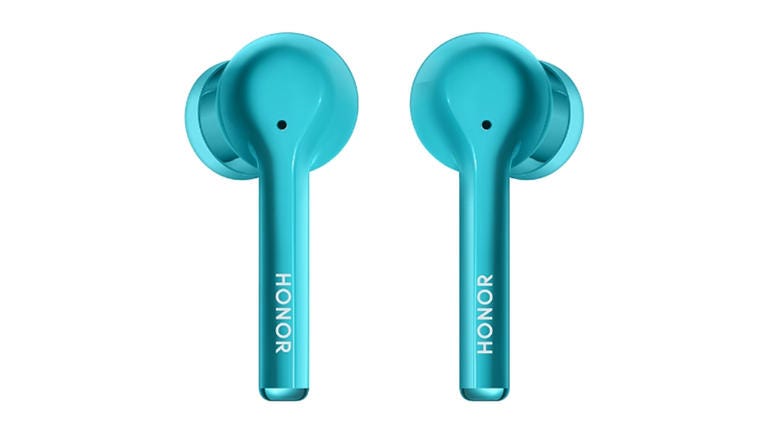 Honor's profile in the UK is largely built on its mobile phones, although the company has also had laptops, fitness bands and smartwatches in its portfolio for some time. Last year I looked at the Honor MagicWatch 2, for example. Now the Huawei sub-brand has launched a number of headphone products, including the £89.99 (inc. VAT) Honor Magic Earbuds I'm looking at here.

My review kit was a rather bright Robin Egg Blue. It's not quite colour match to robin's eggs I've seen, but I guess the point is that it's bright and different to the standard white or black. I rather like it, but if you don't there's a Pearl White alternative at the same price.

The case is robust with solid hinges. It provides good protection for the buds themselves and, as you'd expect, a battery that can charge the buds. Honor says you'll get 14.5 hours of music playback with ANC (Active Noise Cancelling) turned off from the combination of buds and case batteries, or 12 hours if you have ANC turned on. The buds will provide 3 hours of music with ANC on, 3.5 with it off, and 2 hours of calls with ANC on, 2.5 with it off.  These figures are definitely on the lower side. The good news is that the charge cable is USB-C, so if you're already carrying a cable it can double up to charge the Magic Earbuds.

Honor provides three sets of silicon tips to play with in addition to the set that's attached out of the box and I got a nice, snug fit. The buds are light at just 5.5g each, and the case only weights 51g.

Pairing is easy. Open the case, and hold down the pairing button on the back until a light between the in-case earbuds flashes, and you are ready to pair.

What matters most, though, is usability and audio quality. On the usability front, I found the touch controls worked a treat. Tapping either bud controls music playback, and when you take a bud out of your ear, whatever is playing back automatically pauses. Tapping also answers calls and toggles ANC. The buds have three mics located around them to help work out what you want your interlocutor to hear (your own voice), and what needs to be blocked out (ambient noise). When I asked people on the other end of voice calls if they could hear me well, they said 'yes'.

Music sounds fine unless you need a lot of bass. Volume goes loud enough, although it does lose fidelity at the top of the range. Spoken-word content like radio or audiobooks is perfectly good enough. I tested the ANC by listening with the radio on in the background and blocking was noticeable, if not total. Busy and noisy environments like train stations aren't available to me right now, although testing experience suggests there will be some noise blocking in these locations.

Anyone looking for a serviceable set of true wireless earbuds at an acceptable price should consider the Honor Magic Earbuds. They are a good fit, pair easily, have a straightforward tap-based control system and good ambient noise filtering for voice calls. Just be certain that the relatively short battery life is acceptable for your needs.

Apple's AirPods Pro are the best earbuds you can buy, but for all the wrong reasons