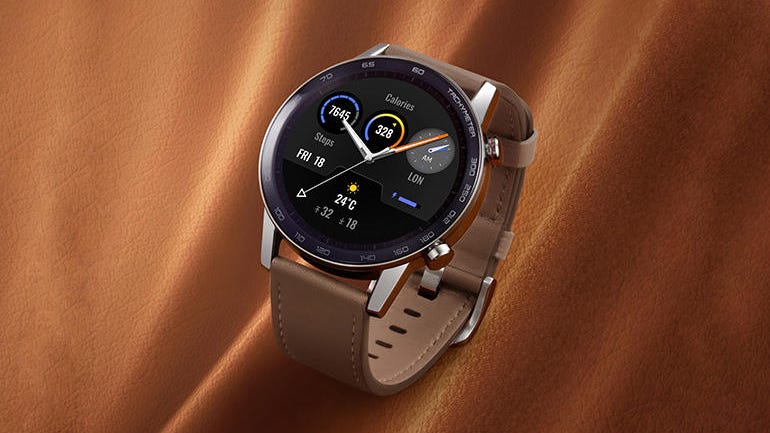 Smartwatches are not all carved from the same stone -- there are different definitions of what 'smart' means, for example. Android users have more options to choose from than Apple users, but the basics must be covered well. The features Honor headlines for its MagicWatch 2 are long battery life, personalised watch faces and fitness modes.

There are two versions of the Honor MagicWatch 2, designed for different wrist sizes. I was sent the larger 46mm version, which is the only one available in the UK at the time of writing. It's available from Amazon at £159.99 (inc. VAT). Pricing and availability of the smaller 42mm model is yet to be confirmed.

The larger watch has a 46mm face, and is quite thick at 10mm including the protuberance on the back that houses the heart rate monitor and a pair of connectors for the circular, magnetic charger. It's quite a beast to wear, and oversized for my wrist.

Still, there is an upside to the size, and that is a large display. The 1.39-inch diameter, 454-by-454 pixel, 326ppi AMOLED touch screen can display a lot of detail. This matters, as you'll be prodding at the screen and reading the face a lot if you're going to make the most of this smartwatch.

Complementing the touch screen are a couple of large buttons on the right rim. The upper button takes you to all the features of the MagicWatch 2, including apps and settings. The bottom button can be set to launch any of the built-in apps or jump to workouts.

There is a lot of 'stuff' on board in the way of applets. These include flashlight, alarm, timer, weather data, notifications, compass, air pressure readout, music player, contacts, call log -- even breathing exercises. The watch face itself can be swept left and right to get to more screens of information; a sweep upwards reveals notifications, while a downward sweep provides shortcuts to various settings such as the alarm, 'find my phone' and 'do not disturb' features, as well as reporting battery life.

The fitness features don't stop at hard physical workouts. A sleep monitor picked up my patterns of light, deep and REM sleep, matching these closely enough to my Fitbit's data to allay any concern over accuracy; the step counter seems accurate both on number of steps and distance, and its heart rate measurements were close to my Fitbit's too. On heart rate, incidentally, the MagicWatch 2 has an on-screen daily report, with longer-term data stored in the smartphone-based Health app.

If you want to use the MagicWatch 2 to initiate calls via Bluetooth, you'll need the 46mm version -- according to the product information, the 42mm model doesn't support that feature. Neither version of the watch has NFC built in, which means there's no support for mobile payments.

It's impossible to add any third-party apps to the Honor MagicWatch 2, so you're going to have to stick with what's on board. To take just one example, I've already noted that there's a music player, and this will cope with tunes transferred across via the Health app (there is 4GB of storage in total, and 2GB available for music). But if you are into streaming services, you can't install applets for these.

If you do need to install third-party apps, then look for a smartwatch running Google's Wear OS rather than the custom LiteOS that's used here, which is dependent on firmware updates from Honor.

Battery life is quoted at 14 days for the 46mm version I tested. The charger is a circular plate which holds the MagicWatch 2 in place with a strong magnet. Leaving the battery to run down from full left me needing to charge after seven days. A more sensible regime of applying top-up charging as part of the same morning routine I use to charge my smartphone meant it barely had to be off my wrist for charging.

Battery life experience will depend on how you use the MagicWatch 2. For example, you can have a watch face (either analogue or digital) on standby, but as you set this up the device warns that doing so will halve the battery life.

There are plenty of watch faces to select between. A long press on the face calls up others on board, making it easy to switch if you fancy a change. There are more faces in the Health app, and they're easily transferred into the MagicWatch 2.

As well as being the place where cumulative health and activity data is stored and displayed, the Health app handles data sharing with other apps. At the moment this is restricted to just Google Fit and MyFitnessPal. It's not possible to export GPX files (which contain GPS metrics), or to share data with other popular platforms such as Fitbit or Strava. Honor needs to give this aspect more thought.


Honor's MagicWatch 2 has some compelling features. The basics of health and fitness monitoring are covered, and the companion Health app does a fair job of displaying aggregated information that collects over time, and of interacting with the watch's internal storage.

But Honor needs to work harder on its smartwatch offer. Software updates need to add support for more platforms for its health data and allow the export of GPX files. Harder to fix is the absence of NFC, which is necessary for mobile payments but requires a hardware revision. The lack of support for third-party apps is also a concern.

Garmin Venu review: Vibrant AMOLED display makes this one of the best GPS sports watches for the masses

One month with the Fitbit Versa 2: Comfortable, affordable, and motivating

Fitbit Versa 2 review: Buy it for its outstanding sleep and health tracking, not for its limited smartwatch functionality

Apple Watch Series 5 review: This is the watch I've been waiting for