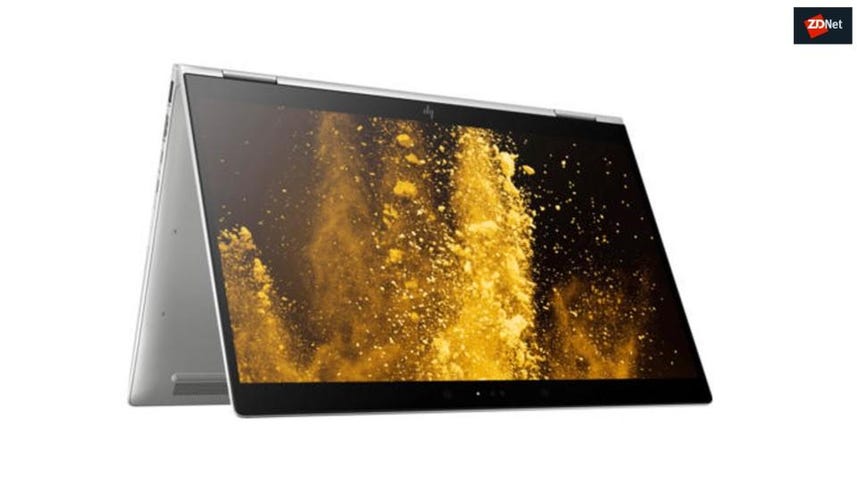 Like many laptops, the EliteBook x360 1040 G5 offers narrow bezels, squeezing a 14-inch display into a chassis that, not so long ago, could only accommodate a 13-inch screen.

Despite its compact and portable form factor, the EliteBook x360 1040 G5 chassis is robust, with a brushed aluminium exterior making for a very solid device. I couldn't bow the lid in my hands, for example. This isn't a particularly heavy laptop, the weight starting at 1.35kg. It's a little thick at 1.69cm at the back, but tapers towards the front, while the desktop footprint is only slightly bigger than an A4 pad, measuring 32.14cm wide by 21.5cm deep.

The EliteBook x360 1040 G5 should travel well without a protective sleeve, although the upper and lower sections don't fully meet when the device is closed, so there's a chance that extraneous objects could find a way inside, potentially scuffing the screen or keyboard.

There is a small lip all the way around the screen frame where it meets the edge of the lid. Most of the time this is not visible and usability is unaffected. However, when working in tablet mode I found it made the laptop a little awkward to grip.

The 360-degree hinges rotate smoothly, and holds the screen securely in every working position you're likely to require.

The matte-finish IPS display in my review unit was a 1,920-by-1,080-pixel touch panel. A 4K (3,840 x 2,160) panel is also available, as is the HP Sure View Privacy Screen. The latter was integrated into my review unit, and is a clever system that reduces the panel's viewing angles. Toggle it on via a Fn key and anyone sitting to your side on a train, plane or in a café will have considerable difficulty reading your screen.

The one preconfigured variant with a 4K panel has a 500cd/m² screen, while the remainder are either 400- or 700cd/m² panels. My review unit came with the 400cd/m² panel, and it really wasn't bright enough for use at anything below 100 percent. Indeed, it was impossible for me to work at the default 40 percent brightness setting when working on battery power, and even working at 75 percent was a challenge. All of the preconfigured models with the Sure View Privacy Screen use a 700cd/m² panel.

The keyboard has a responsive and bouncy action. The keys give a light 'thunk' when pressed, and are less irritating in a noisy room than more 'clicky' keyboards. The two-level backlight is toggled with a Fn key. As usual with EliteBooks, there are buttons for answering and ending video calls on the Fn key row.

To the right of the keyboard is a column containing full-size Home, PgUp, PgDn and End keys, with the right arrow key at the bottom of this column and a Fn-key-size Delete key at the top. I accidentally hit right of the double-width Enter key a few times, finding PgDn instead before acclimatising, but that learning curve was short. More irritating was the relatively small Delete key, which I missed with annoying regularity throughout the review process.

The large trackpad with its integrated buttons was responsive and worked well. I'd like a key to disable it and a light to let me know it's off, but in use there was nothing to fault.

HP provided its Active Pen stylus with my review unit, but it's an optional extra rather than a bundled item. The stylus clings to the left edge of the chassis via magnets, as it's too rotund to fit in an on-device housing.

There are FHD and IR cameras above the screen, and a fingerprint reader on the wrist rest. Device security is complemented by standard HP services such as BIOS recovery system Sure Start Gen4, Sure Recover and Embedded Reimaging. All this is good, but we'd like to see a sliding cover for the webcam — as seen in many of Lenovo's higher-end laptops.

In an effort to rival Lenovo's excellent soundbar-style speaker in its Yoga C930, HP has placed speaker grilles to the left and right of the keyboard. These come from HP's partnership with Bang & Olufsen, and push out good quality sound: top volume is loud, with little distortion, and while bass tones are a bit lacking, this is nothing out of the ordinary for a laptop.

Lenovo's Yoga C930 relies on a single hinge-located speaker that's as accessible in tablet and tent modes as it is standard laptop configuration. By contrast, HP provides a second pair of speaker grilles on the laptop's underside so that sound isn't muffled when the keyboard-side speakers are flat on a desk. This is a more conventional solution than Lenovo's, but there's nothing wrong with that if it works well — and it does.

The EliteBook x360 1040 G5 has two Thunderbolt USB-C slots (one of which is used for recharging), two USB 3.1 slots, and a full size HDMI port as well as a 3.5mm headset jack. Mobile broadband (4G LTE) is available as an option, with a Nano-SIM slot on the left edge.

The battery is a 4-cell, 56.2Wh unit that performed well on my review sample. A typical test session using my standard mix of writing into a web-based app, browsing the web and streaming some audio and video saw the battery deplete to 46 percent after five hours from a full charge. This was with the screen brightness set to 100 percent for the reasons noted earlier. All-day battery life should be no problem for users of the EliteBook x360 1040 G5.

There's nothing revolutionary about HP's Elitebook x360 1040 G5, but it's a solid convertible laptop that performs well. Build quality and specification choices are generally impressive, although the 400cd/m² screen is rather dim and we'd like to see a privacy cover for the webcam.

Beware, though, that high-end variants of the Elitebook x360 1040 G5 are very expensive.

HP launches EliteBook x360 1040 G5, takes aim at Lenovo's ThinkPad Carbon X1
HP wants to win over commercial customers and is making a bet that its next-gen EliteBook x360 can win over users.

Lenovo: New Chromebook, Yoga and ThinkPads with LTE-A, gigabit Wi-Fi and revamped security
New business-focused computers unveiled at MWC in Barcelona, with a mix of premium machines and low-cost offerings for frontline workers.

Should you be scared of your laptop's webcam?
Pretty much every laptop – and for that matter, tablet and smartphone – has at least one camera fitted that's pointing at us all the time. But how worried should we be about eyes on us? Can the nefariously-minded switch them on to spy on us?