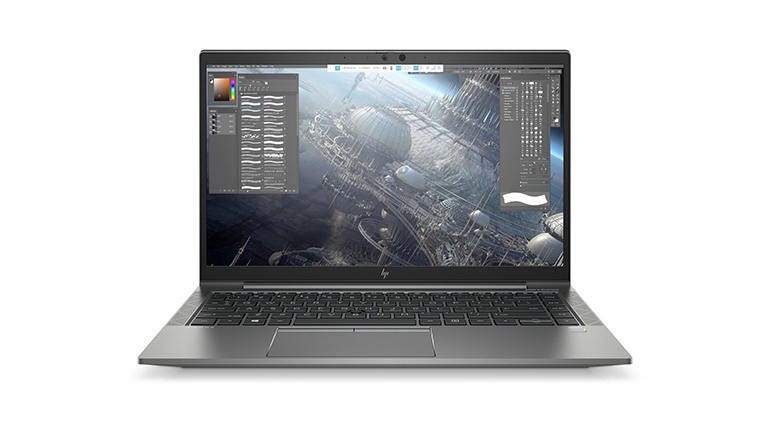 Mobile workstations don't have to be big, heavy 17-inch behemoths, and HP proves the point with its ZBook Firefly 14 G7 -- its smallest and lightest ZBook device. Powered by a 10th generation Core i7 processor with Nvidia Quadro graphics, the ZBook Firefly's 14-inch display can go up to 4K (3840 x 2160) resolution.

If it were placed among several standard 14-inch laptops, it would be difficult to pick out the HP ZBook Firefly 14 G7 as a mobile workstation. It's relatively slim and compact, although it weighs 1.41kg thanks to a robust MIL-STD 810H-tested build. I could barely bend the lid more than a fraction in my hands, for example.

The ZBook Firefly 14 G7 occupies just 32.3cm by 21.46 cm of desktop space, and is 1.79 cm thick. The styling is restrained, with mid-tone slate grey predominant both inside and out. It loosens up a bit with the characteristic ZBook 'Z' on the lid, which is somewhat reminiscent of a superhero's marque.

Another notable styling point is the angled design of back edge of the chassis and bottom of the lid. It's a subtle feature, showing good attention to detail.

The laptop's 170-degree screen hinge doesn't quite reach flat to the desk, which is a pity but not a deal-breaker. HP rather optimistically calls the screen bezels 'narrow' in its product information, but no measurements are given in the product specifications. The top bezel easily accommodates the 720p webcam which has its own sliding privacy cover; some models, including my review unit, also have an IR sensor for Windows Hello authentication and an ambient light sensor.

There are two configurations for the 14-inch screen available off the page in the UK. My review unit had a 4K (3840 x 2160) IPS panel with an anti-glare finish. It does reflect a little bit, but not enough to be irritating. At its maximum 400 nits the display was too bright for everyday working, but it would deliver presentations wonderfully.

Standard FHD (1920 x 1,080) resolution is also available, with either 250 nits or 1000 nits brightness. This lower-resolution option comes in touch and non-touch versions and can include HP's SureView privacy, which makes it near-impossible for people to the left or right of the laptop user to view the screen.

As well as a decent webcam, high-quality audio is increasingly important in the remote-working/video-call era. The ZBook Firefly 14 G7 has speaker grilles flanking the keyboard, with the Bang & Olufsen speakers directing their output upwards and outwards. They deliver plenty of volume, and spoken word audio is really crisp, although I'd have liked richer bass tones.

The keyboard has well-spaced, nicely weighted keys that I found easy to touch-type on at my normal speed. The sound is a bit clacky, and rather loud for working in quiet spaces if you don't want to irritate those around you. There is a pointing stick between the G, H and B keys and two physical buttons designed for use with it above the touchpad. The pointing stick is responsive and easy to work with, although it takes some getting used to the way the cursor accelerates the further you push it.

The Fn row includes a programmable key that can accommodate up to four functions -- alone, and with either Shift, Ctrl or Alt. These range from opening an app, website, file or folder, executing a predefined key sequence, or entering a pre-saved text. This isn't a new idea from HP, but it's nice to see it here. A fingerprint reader on the far right of the wrist rest offers an alternative to the Windows Hello webcam for authentication.

My review unit did not match any of the four off-the-shelf configurations on HP's UK website at the time of writing. It had a 10th generation Intel Core i7-10610U processor with 32GB of RAM, discrete Nvidia Quadro P520 graphics with 4GB of dedicated video RAM, and a 1TB SSD. Pre-configured models start at £1,258.80 (inc. VAT; £1,049 ex. VAT). All have the Nvidia GPU, with the entry-level specification including a Core i7-10510U processor, 16GB of RAM, a 512GB SSD and a 250-nits FHD touch-screen.

Ports and connectors include an optional SmartCard reader on the left edge, along with a 3.5mm headset jack and a pair of USB 3.1 ports, one with charging capability. On the right edge there's a full-size HDMI port, a round-pin power connector and a pair of USB-C/Thunderbolt 3 ports. If the optional mobile broadband is configured, there will be a Nano SIM slot on the right side too.

One area where this laptop could let users down is battery life. HP claims 'up to' 14 hours from the ZBook Firefly 14 G7's 56Wh battery, but my review sample had a 4K screen, which may have contributed to the battery falling from 100% to 63% in just three hours of relatively light workloads for a mobile workstation. I was working into web apps and doing some video and audio streaming, rather than running demanding creative apps, for example.

With light workloads, you might get all-day (8-hour) battery life, but you must expect less if you push this laptop hard. Fortunately, fast charging is available: HP claims 50% in about 30 minutes, and at one point when the battery reached 37% I plugged in for half an hour and it lifted to 65%.

Small, light and reasonably nippy, HP's ZBook Firefly 14 G7 has what it takes to be a good entry-level mobile workstation. But 'entry-level' is the key word here, with 10th generation Intel Core i7 processors across the board and FHD screens on many models. Battery life is disappointing too, at least if you opt for a 4K screen, as on my review unit.