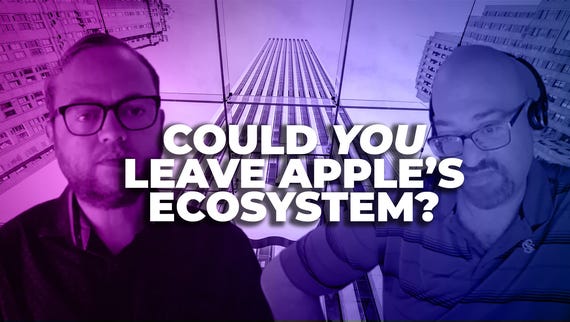 The entry point into Apple's ecosystem is hardware. For me, the iPhone came first. A few months later, I bought a MacBook. When the iPad came out, I bought one of those, too. Over time, I found myself buying more Apple products because of the build quality, but also because Apple's software means all my Apple products work together without much effort on my part.

From photo backup and syncing, to seamless messaging on any Apple device, to more recently iCloud storage -- all my Apple products work together as one cohesive device.

During every keynote or product announcement, Apple loves to remind its users, and ensure potential users are aware, that no other company can come close to the tight integration that Apple offers, because it controls the hardware and software in its products. And, for the most part, it's true. Apple has built a walled garden, and with each new product or service, that wall is getting higher.

Recently, I wondered what would it look like if someone was to go all-in on another ecosystem. Is it even possible to duplicate what Apple offers? After some deliberation, I believe it is possible to get pretty darn close with Google's software, hardware, and services.

Let's start with the software. Google's current ecosystem includes Android and Chrome OS. Initially, the two operating systems were independent of one another, but more recently, Google has begun to intertwine the two systems.

Also: Apple Card, where's the reward? Why no one over 35 wants it

It started with Google adding the ability for Chrome OS to run Android apps, managed by the Play Store. Meaning, you can use the same Netflix app that you use on your phone on your Pixelbook.

Outside of Android apps on Chrome OS, Google recently added a feature called "Better Together" to Chrome OS. When enabled, you can take advantage of text messaging from the Chrome OS device, auto-unlock the Chrome OS device when your Android phone is nearby, and do Instant Tethering with your phone as a hotspot when Wi-Fi isn't available for your Chromebook.

The best and quickest way to take advantage of all the current and future features Google will bring to Android or Chrome OS is to be using one of Google's hardware products. When updates are released by Google, the first devices they reach are the Pixel phones and the Pixelbook.

Even though Android fragmentation isn't discussed nearly as often as it once was, it's still very much an issue you need to keep in mind when dealing with Google's operating systems.

Google updates Pixel phones every month with security updates, bug fixes, and new features. It can -- and often does -- take months for non-Pixel Android phones to receive those same updates.

In other words, buying the latest Android phone from Huawei, Motorola, Samsung, or the like isn't going to cut it.

Also: Android ecosystem of pre-installed apps is a privacy mess

When it comes to hardware, Google has slowly and methodically worked on crafting the user experience. When Google first started releasing phones under the Nexus brand, the phones weren't really Google's doing. Instead, the phones were a slightly altered version of a phone that a hardware partner -- be it Huawei, HTC, Motorola, or Samsung -- was already developing and, often times, selling. The biggest difference was that the Nexus line used a pure version of the Android operating system, free of bloatware and proprietary skins from OEMs that were once so prevalent.

Also: How to switch from iPhone to Android without losing too much

After several Nexus phones, Google decided it was time to take more control over its hardware products. The company released the first Pixel phone in 2016. It was Google's phone through and through, from hardware to the custom -- yet subtle -- Pixel launcher riff on Android. The same remains true with the current Pixel 3 and Pixel 3 XL, perhaps even more so than the first-generation Pixel.

Using the Pixel phone as a starting point, Google has continued to refine the user experience and build an ecosystem of products revolving around it.

According to Google, another device will join the Pixel family on May 7 -- likely the mid-tier and more affordable Pixel 3a and Pixel 3a XL phones.

Google's Pixel line doesn't currently have a smartwatch, but there are rumors that the company plans to release a Pixel Watch at some point, perhaps later this year, as well. Instead, Google's Wear OS is as close to a Google watch as you'll get right now.

In addition to the core Pixel line, there are several Google Home devices that not only act as a smart speaker with Google Assistant but also act as a hub from smart home accessories. And we can't forget about streaming devices, such as the Chromecast.

If you wanted to buy into Google's ecosystem, you'd need to start with hardware. With the current state of Google products and services, I think it'd look something like this:

I realize that two of the products on that list aren't made by Google. But the Fossil Sport runs Wear OS, Google's wearable operating system, and is widely considered the best Wear OS smartwatch available at the moment. I included the Galaxy Buds because they were designed with Android users in mind, and they're much better than Google's Pixel Buds.

As for an Android TV device, the Xiaomi Mi Box S is an affordable and capable streaming box powered by Android TV. If you want something built by Google, then a Chromecast is the way to go.

Services is where things mostly start to come together for Google's ecosystem. The tight integration between services like Gmail, Google Search, Google Pay, and Google Assistant on your Pixel phone or Pixelbook makes it easy to keep track of things like incoming packages or travel itineraries.

Also: These are the things Apple customers hate the most

Google Photos backs up and syncs your photo library, for free. Google Play Music or YouTube Music muddy the waters a bit when it comes to Google's music service, but if you pick one and stay within that service, either is a worthy solution. For podcasts, Google Podcasts syncs your listening history and status across all of your Google-linked devices.

One area where Google's ecosystem falls apart in services is messaging. The company simply cannot focus on a single approach to messaging. Instead, we've seen multiple attempts with products like Hangouts, Allo, and Voice -- all to be abandoned, shuttered, or ignored for far too long.

So, at the end of the day, you're left with reliable and feature-lacking SMS messaging. In its defense, Google has taken the initiative to push for standardizing RCS messaging across carriers and its hardware partners. RCS stands for Rich Communications Services and adds features like read receipts, typing indicators, high-resolution images, and similar features to what you'd find in Facebook Messenger or iMessage. Even still, RCS messaging is very much fragmented, and it's going to take a while for every carrier to adopt the standard.

When you combine all of Google's services with Google's hardware and its frequently updated software, recreating the same type of ecosystem that Apple claims is only possible with Apple is, indeed, possible outside of Apple. Admittedly, there are some nuances and caveats -- namely, Galaxy Buds and messaging -- but overall, Google's ecosystem is a capable one.

What do you think? Did I miss something? Did I leave a product or service off the list? Let me know in the comments below.

Join Discussion for: Is there an alternative to Apple's ecosystem?...