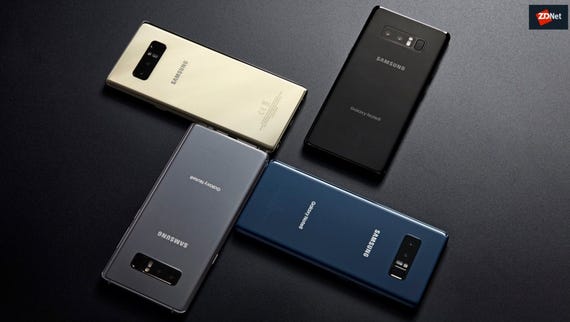 The Apple iPhone X was announced today, and I really don't care.

Samsung's Galaxy Note 8 has been stunning me with its capabilities every day for the past two weeks, and instead of jumping on the endless treadmill of searching for the perfect device, this Note 8 is it. You won't find a more capable smartphone, and it is clearly my pick for the current best smartphone.

Samsung has been a leader in smartphone innovation, and the Galaxy Note 8 is at the apex of current technology, thanks to its Infinity Display, dual camera technology with OIS, S Pen capability, high-performing cellular signal strength, the best smartphone display ever, fast wireless charging, expandable microSD card slot, support for Samsung Gear VR and Google Daydream VR, and much more. Apple commonly takes technology that has been introduced by Android manufacturers and then provides a more cohesive experience for the masses, but Samsung launches new technology and then refines it over time.

With the Samsung Galaxy Note 8, Samsung has perfected its technology so that you can trust the device will perform as intended. Signal strength is one of the most important aspects of a business phone, and the Samsung beats Apple in this feature. The only new tech in the Galaxy Note 8 is the dual-camera setup -- and for this Samsung set the bar, with two cameras that have OIS and the ability to obtain different photos out of the data captured with a single shot.

The S Pen has improved every year on the Note series, and with the Note 8, I use the S Pen countless times every single day. In the past, the S Pen novelty wore off after a day or two, but that is not happening here. I use it for screen-off notes, navigating the Note 8, creating GIFs to share with family, previewing email and calendar appointments, creating fun Live Messages with my family, and more. With some currently injured fingers, it has proven essential and more accurate as a pointer/mouse on my phone.

The Iris scanner works more consistently on my Note 8 then when I used it on the S8 Plus. Samsung Pay is supported just about everywhere and has become the default payment system for me at every retail business, except restaurants. The headphone jack is a simple thing, but it has never let me down.

It is not just all of the high-end, proven technology that makes the Galaxy Note 8 a fantastic device, but the collection of small things that Samsung integrated into the phone to make it extremely efficient. For example, the always-on display shows me the time, date, my lovely Mt Rainier morning photo, and current notifications all of the time. You don't realize how important an always-on display is until you use one for a while and then try using a phone without it.

Another example is the ability to launch two apps to use side-by-side with a single tap, thanks to app pairing on the Edge panel. The integration of visual voicemail into an very functional dialer makes me question what HTC and LG are doing to improve the calling experience.

Samsung Bixby is present on the Note 8 and is more responsive and more accurate than when I was beta testing it on the S8 Plus. Bixby can do things with your phone that no other voice-controlled assistant can, and it really takes using it for an extended period to grasp the power and capability in the system.

Join Discussion for: The iPhone X is basically Samsung's Note...