Part of a ZDNet Special Feature: Apple in the Enterprise: A Strategic Guide

Full Bio
Posted in Tech Broiler on October 25, 2018 | Topic: Apple in the Enterprise: A Strategic Guide 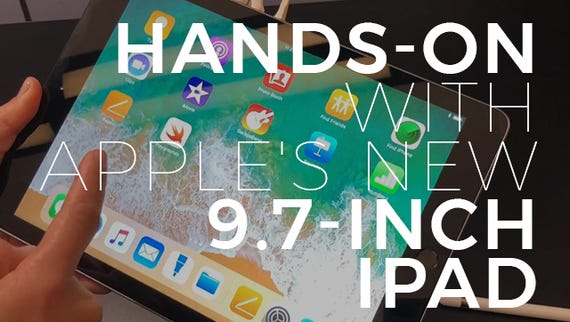 When Apple announced its new, lower-cost, Apple Pencil-compatible iPad at its education event earlier this year, it did not announce new iPad Pro models, which have not had a revision since June 2017 and, arguably, have not changed much since September 2016.

With only a few days before Apple's October 30 launch event, I would like to speculate on what features the iPad Pro models might contain.

The Touch ID sensor, which has been part of the iPad Pro since its inception in 2015, is likely to make a departure with the introduction of the 10-inch and 12.9-inch models in favor of the Face ID sensor first introduced in the iPhone X and now the XS, the XS Max, and the XR.

The usability changes on the iPhone X were substantial enough to cause some controversy because it required significant user adaptation.

I would expect that those folks who did not migrate to the current generation of iPhones -- who would be using Face ID for the first time on an iPad Pro -- would endure similar issues, although iOS 12 has undergone enough tweaks in the intervening time period that a lot of the quirks have been sorted out.

I'm still not crazy with the double-click action on the side power button to confirm purchases in the App Store on an iPhone X/XS/XR. I'd probably dislike it even more on an iPad Pro, because you can't do it one-handed, assuming Apple uses the same UX mechanism.

Another issue that goes beyond usability -- and unlearning learned habits with the home button and Touch ID with a Face ID-based iPad Pro -- is how well we can expect Face ID to work on a much larger device that is held further away from the face and in two different orientations.

Read also: Rescuing tablets from the abyss: Can education and field applications save them?

I tended to use my iPad Pro most in a landscape orientation because it was the 12.9-inch model and holding it in a portrait mode was cumbersome. On the 10-inch model, it is less cumbersome, but I still feel that most people tend to use this device in landscape due to how most apps are written to take advantage of the screen real estate.

Placing the Face ID sensor with the front-facing camera on the top of the screen in portrait mode, as it is on the iPhone X would be aesthetically weird, but it would probably still work.

However, if the iPad Pro has the same iPhone X-style "notch" in a similar position on the device, it would likely annoy a lot of users, because it would appear on the right side or the left side of the screen in landscape.

So, I am going to go against convention and say that on the next iPad Pro, the selfie camera and the Face ID sensor will be placed on the top of the screen in a landscape orientation -- not a portrait one.

As to cameras, it's very likely that at least the 12.9-inch SKU of the iPad Pro will inherit the front- and rear-camera configurations of the iPhone XR, and that includes the 12-megapixel sensor in the rear and 7-megapixel sensor in the front with optical image stabilization (OIS). I'm not expecting the same dual cameras in the rear from the XS and XS Max, but it's possible.

NEXT APPLE IPAD PRO: SYSTEM ON A CHIP/CPU/GPU

It is in this area where I believe the most amount of (modest) speculation is going to occur. The fastest chip Apple has right now is the 2.49Ghz 64-bit A12 Bionic , which utilizes a big.LITTLE-style asymmetrical-multiprocessing architecture using two larger "Vortex" cores and four smaller "Tempest" cores.

While Apple could simply dump the existing A12 Bionic from the iPhone XS into the new iPad Pro, I think they will revision the chip to an A12X, by adding one (maybe two) additional "Vortex" and a perhaps as much six "Tempest" cores using the existing TSMC fabrication process in the iPhone XS.

The A12 uses a 4-core custom Apple GPU, which is a departure from the 12-core PowerVR-based architecture on the A10X. I expect that the core count will probably increase, likely to six based on display requirements.

I also feel it is safe to assume that the iPad Pro will have modest RAM improvements over the previous model (and the iPhone XS) which had 3GB LPDDR4X onboard. So, 4GB is probably what we are going to end up with, with 128K instruction/Data of L1 and 8MB of L2 cache, respectively. 6GB of RAM would be nice, but I doubt it.

I believe that the 10-inch version of the iPad Pro is likely to maintain the same or similar screen technology and specifications as the previous version at 1920x1080, but the 12.9-inch is likely to undergo significant improvements.

Currently, the 12.9-inch iPad has a 2732x2048 264ppi screen, which uses Apple's Promotion screen refresh and wide-color display tech. The resolution of the iPad Pro 12.9-inch has not changed since its launch in 2015, so it is due for a change.

I believe the 2018 iPad Pro 12.9-inch will be the first Apple mobile device to integrate a 4K (3840x2160) resolution screen so that it can consume 4K native content on the iTunes store, which, currently, only some of the highest-end Mac systems and Apple TVs connected to 4K televisions can natively display.

While many of the other improvements described in this article are highly iterative, a 4K display on an iPad Pro would be a significant enhancement and departure from what the product has now, but it would also demonstrate significant value-add and a reason for existing iPad Pro owners to upgrade to a new model.

As to communications and networking, the deed has already been done: Qualcomm modems were dumped in favor of Intel modems in current iPhone models.

Given that Apple ships much fewer iPads than iPhones, in order to simplify its supply chain, I believe we are likely (guaranteed) to see an Intel-only LTE modem in the iPad Pro just as we have now on the iPhone XS, XS Max, and XR.

I also expect to see the same or a similar Apple/USI 802.11ac MU-MIMO Wi-Fi/Bluetooth module that exists in the iPhone XS.

I also think that, like the iPhones that recently did away with it, we can finally say goodbye to the headphone jack in the iPad Pro. If you are still using wired headphones (like me), it's time to break out that Lightning-to-Mini jack dongle, in case you haven't been using it on both your iPhone and iPad already.

This is an area that can go two different ways: Either Apple does nothing and maintains the status quo by sticking with Lightning and a USB PD-compatible charging interface, or it does something different.

Going with the 7.5W Qi charging, which the iPhone 8 and iPhone XS has, is probably out of the question.

We already know what the AirPower looks like, there's no proof it is going to be released at this October event, and there doesn't seem to be an easy way to lay an iPad on top of one. It would be totally unbalanced. So, while Apple could equip an iPad with Qi charging, it doesn't appear equipped to do it with its own accessory.

I think it is very likely the updated iPad Pro will maintain the Lightning connector and USB PD from the previous model.

While USB-C-to-USB-C (Thunderbolt) connectivity, as used on the current MacBooks, would be nice and inject some long-term sanity and industry standards into the equation, there are enough people who own both iPhones and iPads that keeping two (or three) different sets of cables would be perceived as annoying.

It's bad enough that those of us who have iPhone 7s and older phones have to keep USB-A-to-Lightning cables around. Can you imagine, in order to take advantage of the latest fast charge technologies, having to keep USB-C-to-Lightning and USB-C-to-USB-C cables (assuming you don't already do, as a current MacBook owner), as well?

One reason for moving to a USB-C-to-USB-C dock interface would be if Apple decided to fully implement Thunderbolt on an iPad so it could be used as a makeshift workstation with a much larger external display, mouse, keyboard, and an external GPU.

This sounds like a natural evolution for the iPad Pro, particularly if we see device convergence with the Mac, and the company finally decides to take on Microsoft's Surface professional vertical markets. I just don't see that happening this year, though.

What technologies do you think will be introduced into the new iPad Pro? Talk Back and Let Me Know.