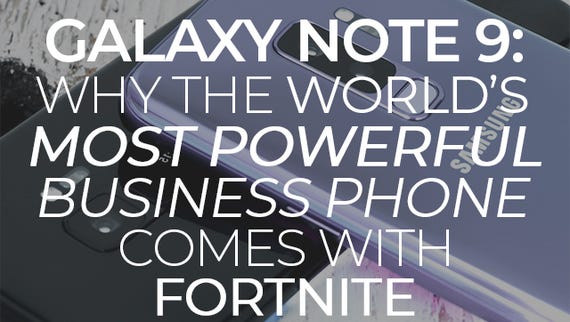 The gasps could be heard all over the world.

Well, the tech world. And the 15 other people desperate to know whether the new Samsung Galaxy Note 9 would be any different from all the rumors and leaks and whether they should get one.

And what's the headline? Oh, that price.

If you can hear me above your teeth-gnashing, please let me tell you this is a wonderful thing.

Yes, it'll set you back a substantial amount of cash, but it'll also propel you forward into a new you.

It's disturbingly clever of Samsung to reach for such a big number.

The wisdom of Samsung here doesn't come from the stunning features, the specs that boggle the goggles or the sheer glory of the Note 9's looks.

I fear the phone has none of these things in devastating quantities. It's nice. It might even be very nice. So was the Galaxy S9. Nice wasn't enough for it to sell.

No, the joy here lies in the number itself.

Samsung is dangling a 128GB version, but that's like a 3-Series BMW version. I know this because Samsung says it will be "available at Amazon, Best Buy, Costco, Sam's Club, Straight Talk Wireless, Target and Walmart as well as Samsung.com and the ShopSamsung app."

But you, you want the bigger one, don't you? Because bigger is better. And you know this big one's better because Samsung insists it'll only be available at "select retail locations and online at AT&T, T-Mobile, Verizon, U.S. Cellular and Samsung.com."

How many select retails locations do you know?

Samsung's made your only other choice the 512GB, the one that's too good for Sam's Club. The really expensive one. Or, rather, the more-expensive-than-iPhone X one.

You know that Samsung isn't brimming with confidence right now. This new phone is a mere 9. Apple's had a 10 (X) for many months. What if it comes out with an 11 in September? Think of the shame.

So now Samsung makes its own number the news, which lets the phone seem more than it is.

This, in the image world, is called making a statement. Samsung's been out of statements for a while now. Its phones have swirled in more pleasantness than a flight attendant on a private jet.

But what was truly pulsating about them? Anything? And this at a time when smartphone sales are slowing and people are buying more refurbished gadgets.

The Korean handset maker resorted to telling people that the iPhone X was awful because, dash it, people seemed to quite like it.

It's even said to be considering shutting down the Note brand entirely, if this one doesn't generate sufficient enthusiasm.

So with the Note 9, it's going for broke, as it were. You can now buy the most expensive phone on the market -- barring novelty items like a gold Trump iPhone -- in order to show people what you're made of.

It's not about the phone. It's about you.

Yes, you drive a very nice Acura. It's not a big arrogant Tesla, though, is it? You're still kicking yourself, but there are two years left on your lease.

Yet for slightly more than a pair of decent Louboutins you can get the Note 9.

You can believe that this isn't an S Pen in your hand, it's a Mont Blanc. A Mont Blanc that's also a remote control.

You can believe that the Note 9 is fast and powerful, for the same few weeks that it'll take for it to start getting progressively slower.

Also: How to use the updated S Pen with Bluetooth in Samsung's Galaxy Note 9 TechRepublic

Sadly, phone manufacturers are getting a little tired of finding new ways to tell you things that sound (are) a little old.

"With just a click, you can take selfies and group pictures, present slides, pause and play music, and more," says Samsung's PR blurb.

That all sounds like a groundbreaking breakthrough wrapped in several molecules of wind from a couple of years ago.

When people ask what color your Note 9 is, you'll be able to say Lavender Purple. Because they might think lavender is a shade of purple and you can disabuse them of this very notion.

I feel sure that Samsung wants you to suspend your rationality because its press release enjoys the words: "Galaxy Note 9 will help users stand out from the crowd."

But it looks a lot like the Note 8. Which mostly stood out from the crowd by not exploding.

Please, look at the Note 9. It's a nice Acura, isn't it? A very nice Acura with all the bits.

So how do you make an Acura with all the bits "stand out from the crowd"? You tell people how much you paid for it.

Join Discussion for: The Samsung Galaxy Note 9 is a bargain at...