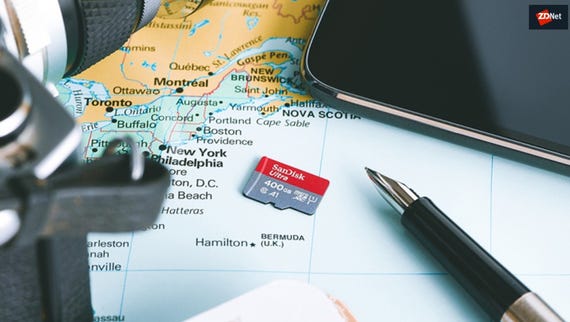 Video: This microSD card crams 400GB of storage into your smartphone

Western Digital expands its surveillance hard drive portfolio with new 10TB and 12TB drives that are purpose-built for the emerging DVR and NVR systems that feature Artificial Intelligence (AI) capabilities.

Must read: iOS 12 beta: Should you run it? Is it faster than iOS 11? Will it break your iPhone?

Hard drives built specifically for video surveillance systems are not new, and are engineered for high-temperatures, 24/7 running, and reliability.

The Western Digital Purple range is no exception, built for workloads of 360TB/year, and support for 64 cameras. The drive has a MTBF rating of 1.5 million hours ( here's a piece to help you make sense of MTBF), and a non-recoverable read errors per bits read rating of less than 1 in 1015 (which means that one bit read in every 1,000,000,000,000,000 bits read might be problematic, which might not seem like a lot, but it's an order or magnitude better than consumer hard drives).

The drive also enjoys low power consumption, consuming no more than 6.6W in use, and a minuscule 0.6W at standby.

But what's really new about these drives is their support for DVR and NVR systems that feature AI capabilities. The Western Digital Purple 10TB and 12TB capacities hard drives both feature exclusive AllFrame AI technology designed specifically for AI-enabled systems, and support up to twice as many AI channels (16 AI channels/32 AI streams) than the competition. This allows surveillance systems to utilize real-time edge analytics to better detect objects and reduce false triggers, and filter out objects such as animals, leaves, and even light that can cause false alarms.

AI-enabled systems can also be used to highlight potential threats.

The 10TB Western Digital Purple is priced at $399, with the 12TB version coming in at $479, and both come with a limited 3-year warranty.