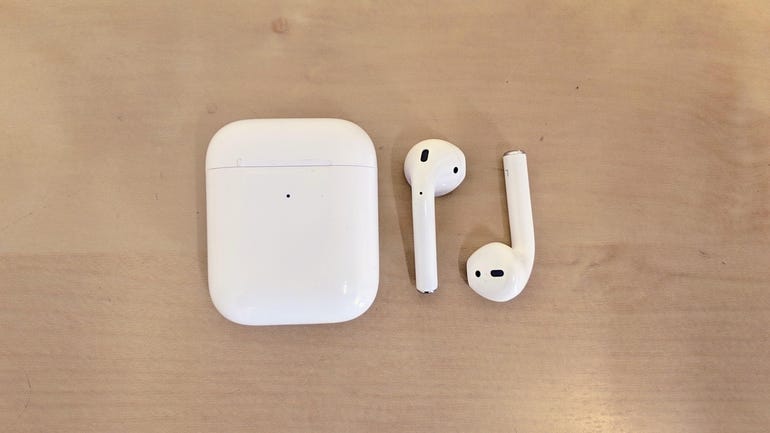 I'm often asked what my favorite gadget or gadgets are, and for the past two years, without hesitation, my answer has been Apple's AirPods and the Nintendo Switch.

The AirPods took wireless earbuds and made them something I actually wanted to use and made it easy to do so. The Switch, well, I like to game when and where I can, so the portability combined with the ability to dock on a big screen TV has won me over.

For the past few months, however, the battery life on my original AirPods has been suffering. I've used them a lot since their release in 2016, and the small battery inside each earbud has suffered enough.

For months, rumors and speculation swirled that new AirPods were just around the corner. Keynotes came and went, without as much as a mention of a second-generation AirPods update. Then, the week before last month's services event, Apple cleared out all hardware announcements. There were a new iPad Air and iPad mini, refreshed iMacs, and, finally, new AirPods.

For the past week, I've been using the 2019 version of the AirPods and they're every bit as impressive. On paper, the changes are subtle, but in use, there's a meaningful difference.

If you didn't know what to look for on the wireless charging case, telling the difference between first- and second-generation AirPods would be impossible.

The wireless charging case has a different hinge, an indicator light on the outside of the case, and the pairing button has moved up just a touch.

Other than the new case, the new AirPods look like the old AirPods. I had hoped we would see AirPods in a matte black finish, but the bright white earbuds have become a cultural phenomenon and easily recognizable over the past two years.

The earbuds are still one size fits all, and in my testing, have the same fit as the first-generation AirPods. I've never had issues with AirPods falling out or becoming uncomfortable in normal use.

The wireless charging case is compatible with all Qi-enabled wireless charging pads, and charges at a speed of 5W. There's also a Lightning port on the bottom of the case if you're short on time and want to charge the case a bit faster. The case will fully charge via cable in about two hours, or wirelessly in about 3.5 hours.

The most notable difference between the first iteration of AirPods and the 2019 version is a new Apple H1 chip. The custom H1 chip replaces the W1 chip that's found in the first-generation AirPods.

The H1 is designed specifically for headphones, and won't make its way to other wearables, like the Apple Watch (as we saw with the W1, and later the W2 chip).

What does the H1 chip bring to the table? Double the talk time of three hours, faster connection speed for incoming calls and when switching between devices, and hands-free "Hey Siri" use.

Over the past two weeks, I've yet to completely drain the AirPods during my normal use in my office. I've pushed four hours of constant listening and had just under 20 percent battery left, putting the five-hour estimate within reach.

The new AirPods boast the same range, seamless pairing process that takes a couple of seconds (and syncs across all of your Apple devices), and auto-pause and auto-resume when removing/placing an AirPod from your ear.

One feature I've found myself using, and actually enjoying, is hands-free Hey Siri. Instead of double-tapping on an AirPod to trigger Siri, you can now speak Hey Siri at any time, and as long as the device they are connected to has an active internet connection, it will trigger Siri. You can then interact with Siri as you normally would -- ask for weather, directions, your messages to be read, control music playback, or adjust volume.

Often times, I don't have my iPhone in my pocket or nearby when I'm using my AirPods; I get up and walk around a lot. So using Hey Siri with my iPhone isn't really possible. With the AirPods, however, I can still bark commands on Apple's personal assistant and not have to worry about where my iPhone is.

Additionally, when using my Apple Watch with the AirPods, Hey Siri works. Instead of lifting my wrist to talk to Siri, I can talk and keep doing the task at hand without interruption.

Will I continue to use Hey Siri with the AirPods a month or two down the road? Most likely. Switching playlists and having messages read to me with a quick voice command is far too convenient for me.

When AirPods were first released, they were in a category of their own. There really wasn't a product that came close to providing the same completely wireless experience. In the two years since their release, several companies have come out with products aimed at taking a slice of the market share from Apple. But it wasn't until Samsung's recently released Galaxy Buds that there was a true competitor that mimics the AirPods features, and in some ways improves upon them.

Samsung's Galaxy Buds are designed for use with Galaxy devices, much in the same way that the AirPods are designed to use with Apple devices. And while both products will work outside of each respective company's ecosystem, they're better inside the walled gardens.

Although, if you don't care about fast pairing and features like auto-pause on iOS, the Galaxy Buds are slightly less expensive at $129.

When it comes down to it, there's not a big difference between the first and second generation AirPods. Talk time, improved connection speed, and Hey Siri are the headlining features, and to some, they won't mean all that much.

Also: Apple versus the privacy spiral: The business value of trust

To be honest, if you recently purchased AirPods and your battery life is still strong, there's little incentive to upgrade. However, those who have had the original AirPods since launch and are seeing diminished battery life, or those who have never owned a pair and are ready to make the wireless jump, the new AirPods are worth every penny.