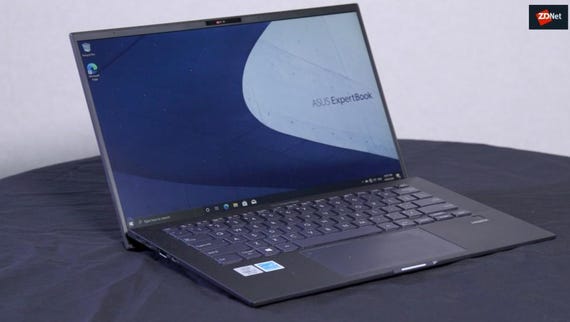 Using a word such as ultralight to describe a laptop is often a case of hyperbole, but with the Asus Expertbook B9, it is absolutely fitting.

In March, I took a look at the HP Elite Dragonfly, which sat on the border of the 1kg barrier, and thought it would be the lightest device I would see in the cursed year of 2020.

Not for the first time this year, I was totally wrong. The Expertbook is definitely under the 1kg mark, and it feels lighter, even with a 66Wh battery that provides more than enough power to get through a workday.

This is exactly the sort of machine that Intel was aiming for when it kicked off Project Athena to create laptops that were light and could last all day. Testing by CNET found it could stream video for 16 and a half hours.

The silicon offered is more than reasonable with an Intel Core i7-10510U, 16GB of memory, and 2TB of storage split across a pair of Samsung 1TB NVMe drives.

Thankfully, Asus has chosen to hide away most of its own functionality under the MyAsus app, so the device does not suffer from a scourge of bloatware.

In terms of ports, the Expertbook offers two Thunderbolt 3 USB-C ports, a legacy USB 3.1 Type A port, a HDMI output, and a full RJ45 adapter that plugs into its mini-HDMI port.

Asus also provides its ErgoLift hinge that drops down below the base of the laptop -- thereby raising the keyboard to a nice angle for typing -- provides better ventilation for the silicon, and also cheekily hides much of the lower bezel. It also feels as if you need to look over the top of the keyboard to view your taskbar. It's quite a good design in practice, even if it does mean the laptop can flex by pushing down on it too hard -- in real-world usage, I didn't encounter any flexing that was concerning.

But before you rush out to replace your current laptop, realise that it's not all roses and glory.

The main drawback is the screen itself. Asus offers only one choice: A 14-inch 1920x1080 IPS panel. This is sub-optimal for two reasons. Firstly, in its default configuration, Windows sets the interface to a 150% zoom level, which reduces the number of effective pixels to 1280 by 720. With the 100% zoom level making text way too small for my eyes, the sweet spot for this device seems to be the 125% setting.

Secondly, the panel is further hindered by the 16:9 aspect ratio which is much better for watching movies than getting work done. It also does not support touch interactions. This probably helps the laptop stretch out its battery, but it is rather surprising nowadays to find a Windows device where touch is not even offered as an upgrade.

Beyond the screen, during the writing of this review, more than once the laptop tried to go to sleep, thanks to yours truly hitting the power button in the upper right corner of the keyboard, rather than the delete button to its immediate left, or the backspace button directly below it.

Also, the default configuration of the 2TB of available storage is rather curious, with 380GB set aside in an OS partition, and then a 572GB partition labelled as data, and a 953GB partition with the same name. Naturally, all the user folders are on the smallest partition alongside Windows, which means I can't help but think most of the available space will never be used in a meaningful manner by lay-users.

It also would not be a proper Asus device without something a little experimental thrown into the mix. In the case of the Expertbook, it is a button on the touchpad that lights up a number pad and promises something approaching a data entry clerk's dream. In many ways it feels like a refinement of the ScreenPad in the Zenbook Pro 15 from two years ago and a focus on its most useful feature. While the Zenbook and its ScreenPad felt very underbaked, the Expertbook and its NumberPad feature feel like it is a few minutes away from being properly cooked.

Too often when using the NumberPad, however, there were shortcomings discovered and modes of input mixed up. For instance, in spreadsheets, if I moved between cells with the trackpad, it would remain in trackpad mode when tapping to try to enter numbers, which meant I often needed to exit and reenter NumberPad mode for numbers to be registered.

Similarly, in the calculator app, at times, the equals key registered as a right-click. At other times, if the cursor happened to be over a number in the interface, and I hit enter a couple of times, the laptop would then register any tap on the NumberPad as being a press on the hovered-over number, not whatever number I pressed on the NumberPad. This was especially annoying when smashing the backspace area on the NumberPad to remove a mistake, but then only end up entering further numbers.

If that above description is confusing, I really recommend watching the video review of this device, but the end result is that the NumberPad is a great idea whose implementation is lacking.

And then there is the enigma that is the price and availability of the laptop. Searching for it in Australia is a road to nowhere, and Asus doesn't sell it through its site. The company said the i7 version of the ExpertBook starts from AU$3,500, and the i5 verison starts at AU$3,000. Australian purchasers will need to hit up the local resellers directly rather than head to the sites of the usual suspects and plug in a credit card number.

On Amazon US, the price of the unit we reviewed was $1,800, which is around AU$2,465 at the time of writing, so maybe buying in Australia is a silly idea unless you, sensibly, demand local support.

With those criticisms in mind, the fact remains that this is still an ultralight laptop with a thumping battery and a selection of silicon more than suitable for most business users.

The lightness will engender itself to users that need to carry laptops around, and the battery power will make sure that you don't need to run off to a powerpoint in the middle of the day -- that is to say, it's a very good laptop for the pre-COVID world.

Should business travel return as an option for people, and you happen to be a road warrior PC user that needs a new laptop, you'll do a lot worse than picking up an Expertbook. Perhaps purchasing one up on your first trip back to America is the cheapest way to get your hands on one -- but who knows when those sorts of international activities will resume.

Join Discussion for: ​Asus Expertbook B9450: A traveller's delight