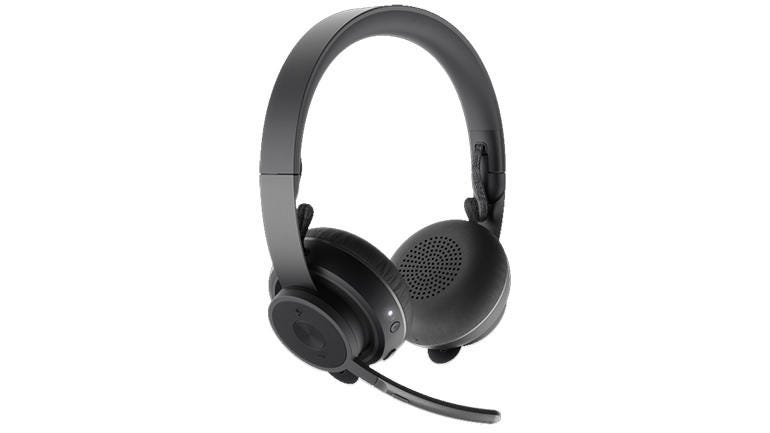 Open-plan offices are often full of headset wearers, used for a mix of voice calls and video calls, or just chill-out music to work to when the constant hum of the workspace needs drowning out. The best of these headsets also have good enough audio quality and battery life for the commute, when anything from music to podcasts to catch-up TV might be the order of the day.

This is a headset that will need to travel, and so it folds down into a fairly tidy, compact package which provides some protection for the earpieces. However it doesn't lock into its folded position, and will easily fall out of lock if loose in a rucksack. Logitech provides a soft drawstring bag for toting the Zone Wireless which mitigates this problem. Still, I'd rather it came with a hard case, as the bag doesn't provide a great deal of protection.

Pairing is easy. I paired with a handset and tablet using Bluetooth and a laptop using the unifying receiver. Once set up, it was no problem switching between voice dictation, taking and making calls, and listening to music on my laptop, followed by video catchup and music listening on my tablet and phone respectively.

The headset has been designed to be worn for long periods, with plenty of cushioning on the headband and earpieces. I wore it for several hours at a stretch without discomfort. ANC noise cancellation worked fairly well: sound did seep through when I was working in a noisy café, but it was definitely reduced. There is an app that lets you make a few settings that help personalise things, including an equaliser and the ability to turn the handset's voice prompts on or off.

The microphone bar is relatively short, which means it's easily stowed when the headset is not in use. Fortunately, it doesn't get in the way of raising a cup of tea to your lips -- I managed to talk through a few Skype calls while supping.

The controllers are all on one earpiece. There is a button to toggle ANC and a Bluetooth/power button. On the front face of the earpiece a central button allows you to play/pause music and handle calls. You answer with a short press and reject with a long press. Turning volume up and down is a simple matter of pressing the top or bottom of the earpiece's front face. There is a mute button on the mic, and simply pushing it upwards to a position parallel with the headband also mutes it. It's all very straightforward, and very easy to get to grips with. The mic arm rotates in both directions, so the headset can be worn and used easily by both left and right handers.

Logitech says the battery is good for 14 hours with ANC on and 15 hours with it off for talk, and 14 and 16 hours respectively for listening. It doesn't have fast charging, but it does support any Qi-compatible wireless charger, which you'll have to buy as an-add on. The charging pad is on the opposite earpiece to those controls I mentioned earlier. Logitech provides a charge cable, but it's the old Micro -SB style, which is frustrating if you already carry a USB-C cable.

The Logitech Zone Wireless Plus served me well during testing. It's comfortable to wear, and its controls are easy to understand and use. I took calls, listened to music, watched catch-up TV and dictated text across phone, tablet and laptop without a hitch. Audio quality was good across all the different use cases, and I got as good an experience when working as when at leisure. A hard case for transportation would be appreciated, though.