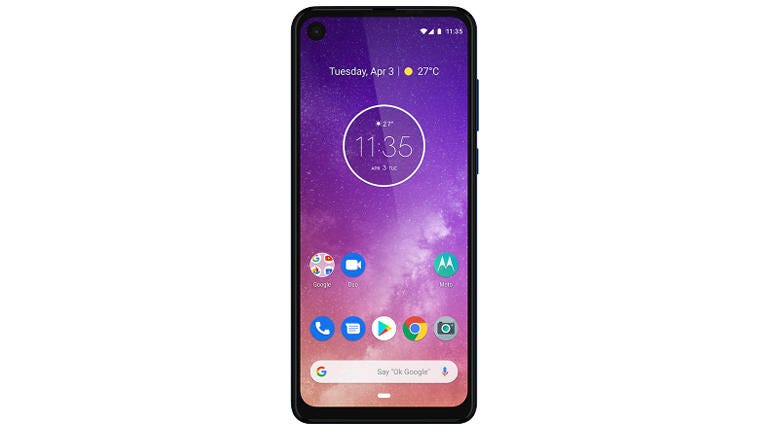 The Motorola One Vision is an attempt to bring some high-end specifications to the mid range -- a territory Motorola already covers with its Z and G series handsets. For £269.99 (inc. VAT) this 6.3-inch smartphone offers three features that are immediately eye-catching: a 48-megapixel main camera; a 21:9 aspect ratio screen (see also Sony's Xperia 1 and Xperia 10 Plus); and a front camera that sits in an on-screen cutout (a feature that Honor has used in its View 20 and Honor 20 handsets, and Samsung has also toyed with -- for example in its Galaxy S10 series).

All of these phones are more expensive than the Motorola One Vision: but can it really deliver compelling features and performance for under £300?

There is nothing in the design of the Motorola One Vision that screams 'budget' at you. The chassis is a glass and metal combination that makes it look like a much more expensive handset. The glass back has a light-reflecting finish that can't match the likes of the Honor View 20 or Honor 20 Lite for 'wow' factor, but which is nonetheless eye-catching. The Sapphire Gradient variant is a deeper blue than some, which helps it stand out from more reflective and refracting handsets.

There's a fingerprint sensor on the back with a circular indent housing the Motorola logo. This is the perfect location for both left- and right-handed users who want to use a finger as their login biometric. Face unlock is also available.

The back curves on its long edges into the metal sides of the handset, which are a slightly lighter blue than the back. The join between the sides and back is visible and there's a very tactile ridge along the top and bottom short edges. It's not a big deal -- more a sign that, for all its good looks, this is still a mid-range phone.

The handset has been finished with a water repellent coating that gives it an IP52 rating for dust and water resistance. That's enough to survive splashes or, as Motorola puts it, 'a sweaty workout or light rain'. A clear silicone bumper is provided that, if used, greatly reduces the visual impact of the glass back.

As mentioned earlier, the 6.3-inch screen has a tall 21:9 aspect ratio which Motorola is terming CinemaVision. It's an IPS panel a resolution of 2,520 by 1,080 pixels (432ppi). The front camera sits in a 'punch hole' at the top left of the screen (in portrait orientation). A comparison with the £849 Sony Xperia 1 is instructive: the Xperia 1 has a 6.5-inch 21:9 OLED screen with 3,840 by 1,644 resolution (643ppi) and comes with software that can convert SDR content to HDR -- including tweaking its colour.

Watching video on the two handsets side by side, the more expensive Xperia 1 delivered the better viewing experience. That's no surprise, but the Motorola One Vision does a good job, and its main problem is not a comparison with a higher-end phone.

The key issues are a lack of content to take advantage of the 21:9 aspect ratio, and the difficulties that this tall format creates for usability. Over time the content problem will be resolved, but the usability ones are less easy to fix. It's true that the narrowish handset is easy to palm, but I found it impossible to stretch to the higher and lower reaches one-handed. There's no screen size reduction on offer to help with this. In addition, like the Xperia 1, I couldn't get the phone -- which measures 160.1mm by 71.2mm by 8.7mm and weighs 180g -- into any pocket so it had to live in my backpack, which meant it was a hassle to use when out and about.

A handset that majors on its screen needs good sound output. There is just one speaker on the bottom edge that delivers decent volume, and while somewhat lacking in bass, it's acceptable for a mid-range handset. There is a 3.5mm audio jack on the top edge, and the provided earbuds are of reasonable quality -- although as the volume rises, the bass becomes rather fuzzy. Still, given the price, you get a pretty good audio subsystem.

The 25MP front camera has a quad-pixel sensor that combines four pixels into one large pixel to deliver sharp images with improved brightness and reduced noise. There are two cameras at the back, with the main 48MP unit using the same quad-pixel sensor and OIS to capture shots. There is a second rear camera: a 5MP unit for depth sensing.

There are a few 'AI' photography features, such as the ability to capture a shot only when everyone is smiling and 'smart composition' that automatically saves a second image with a composition improvement. Night Vision captures several images in quick succession and can then automatically add more light into a photo. There's nothing particularly revolutionary here, but to find this combination of features in a handset at this price is pleasing. The only real downside is physical: the relatively large punch hole for the front camera is actually more distracting than a notch.

Motorola has opted for a Samsung Exynos 9609 processor, a rare choice which, along with 4GB of RAM, delivered Geekbench average benchmark scores of 5311 (multi-core) and 1599 (single-core). These scores are close to those achieved by the Honor 20 Lite and Huawei P30 Lite.

There's 128GB of internal storage, of which 12GB is used out of the box, leaving 116GB free. If that's not enough, the second SIM can be sacrificed in favour of a MicroSD card.

The Motorola One Vision runs Android 9, and benefits from Android One, meaning owners can rest assured of regular updates, including major Android upgrades, for two years. Motorola adds few extras: the usual Gestures are present, including shaking the handset to open the camera, doing a 'karate chop' to toggle the torch on and off, and tapping the screen with three fingers to take a screenshot. It's a shame there's no screen shrinking option to aid one-handed use: although I find this is often a poor solution, some would no doubt find it helpful when using the tall screen one-handed.

The 3500mAh battery needs to work harder than usual to keep the large screen alive. It managed to keep going under the Geekbench battery test for 6 hours and 3 minutes, which is a creditable if far from spectacular performance, gaining a Geekbench battery score of 3630. Fast charging is available (15W), but there's no support for wireless charging.

Motorola has done well to bring the novel 21:9 screen format into a £270 handset, although the screen is IPS rather than OLED. In conjunction with a good camera setup, Android One upgrade assurances, the inclusion of a 3.5mm headset jack and a solid and stylish build, this is a handset that punches well above its weight. Battery life could be better though.

Huawei's Android puzzle: Is Linux Sailfish now an option alongside its own OS?

Moto Z4 vs. OnePlus 7 Pro: Both good for work with compromises