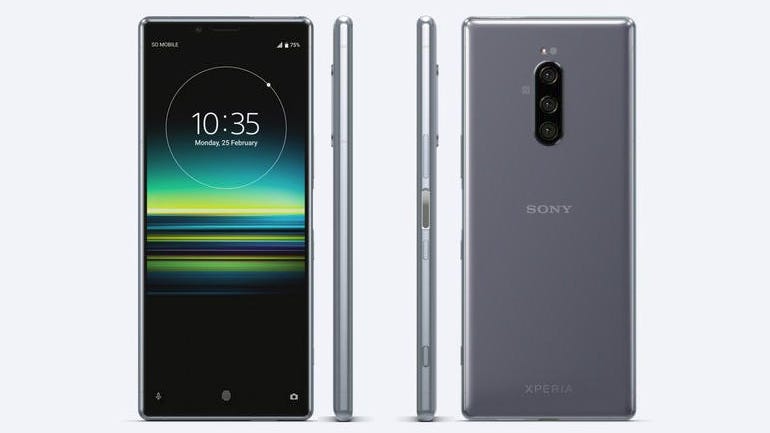 Sony brings the distinctive 21:9 aspect ratio to its new flagship Xperia 1 smartphone. The screen is a 6.5-inch 4K OLED, which is a big clue to Sony's main target audience: video creators and viewers. It's a big step up from the 6.5-inch Xperia 10 Plus, which has a much lower resolution and uses an IPS panel.

But the Xperia 1 has other points of interest, too. There's a side-mounted fingerprint scanner, a dedicated camera key for the triple camera system, and several software quirks including the Intelligence Engine, which can suggest which apps you might want to run, and the edge-tapping Side Sense navigation system. This £849 flagship phone is Sony's attempt to recover from a period in the doldrums. So how does it measure up?

Sony has certainly gone for broke with the design of the Xperia 1. My grey sample was pleasingly on-trend in colour terms, and if grey isn't your thing then there are also purple, white and black options. The camera lozenge protrudes somewhat from the back of the phone but that's not unusual these days. The edges curve neatly into metal sides.

There is Gorilla Glass 6 both front and back and inevitably this means the handset is slippery to hold on to, although I found it resistant to fingerprints. Like other glass-backed phones it also had the rather irritating habit of falling off my armchair when delivering notifications. This is nothing a bumper won't fix, yet it's odd to design a handset that needs a third-party addition to make it truly usable. This isn't a Sony-specific comment, of course, but that doesn't make it any less pertinent.

The Xperia 1 is IP68 rated, which means it is 'dust tight' and should survive immersion in over 1m of water for at least 30 minutes.

On top is a caddy for one SIM and a MicroSD card. The right edge has three buttons and a fingerprint sensor, which is more than usual on a handset. The volume rocker is a little short for my taste, and the on/off button is located further down than I'd like. This is so that it's easily used in conjunction with the fingerprint sensor -- you just hit the button with your thumb and then slide onto the scanner for a quick unlock.

The fingerprint scanner worked efficiently for me as a right-handed user, but lefties are at a disadvantage with this setup. It's also nowhere near as convenient for general ambidextrous use as working with a rear-mounted or in-screen scanner. Oddly, there's no face unlock.

The Camera button will start the camera app running, while a second press will take a snap or start a video. There are other ways to launch the camera even faster. If Smart Launch is configured you just orient the screen to landscape and hold the handset still. Also, the camera can be launched with Side sense (more on that later).

There are two speakers. One sits on the bottom edge, while the other is inside the handset's earpiece on the front of the phone. This allows for stereo delivery from the phone itself, and makes it harder to cover both speakers when holding the phone in landscape mode.

Audio quality is not great: it's short on bass, and at top volume the sound really is quite harsh. The provided earbuds deliver much better quality sound.

When changing volume, a second slider appears for 'Dynamic vibration'. This causes the phone to vibrate to the beat -- effectively responding to bass tones. It's quite a clever idea, but seems lacking in realisation. Yes, the handset vibrates, which you notice when holding it, but it's something of a gimmick.

Some users will miss a 3.5mm headset jack, although Sony does provide a USB-C adapter -- which is just as well, as the provided earbuds have a 3.5mm connector.

The 6.5-inch screen is the Xperia 1's standout feature. It's almost bezel-free on the long edges, and the short bezels are impressively narrow. The screen-to-body ratio is 81.9 percent. In pursuit of cinematic visuals, there is no front-camera notch.

The screen has a very impressive 4K resolution of 3,840 by 1,644 pixels (643ppi). Video on the OLED display is vibrant, and image quality superb. Sony provides a display setting called 'creator mode' that applies software processing to improve colour accuracy with HDR content, and converts SDR content to HDR -- including tweaking its colour.

The screen is arguably at its best when viewing 21:9 video (Sony calls this format 'CinemaWide'), but letterboxed video worked perfectly well. The tall screen offers advantages in portrait mode for non-video content, too: you'll do less scrolling through websites, emails or ebooks, for example.

It's also much easier than usual to work with two windows open in both portrait and landscape modes. Sony has made this easy by providing a Multi-window tool, which you call up from an icon or by sweeping upwards on the edge of the screen. You can create shortcuts to pairs of apps that you use regularly, which I found useful.

All that noted, I have two problems with the 21:9 screen -- and these are usability problems rather than anything to do with the screen itself. The handset is inordinately tall, with official dimensions of 167mm by 72mm by 8.2mm. It simply didn't fit into any pocket of my usual clothing, which meant it had to sit in my backpack, to be fished out whenever needed. That's just inconvenient.

The second problem arose every time I wanted to swipe at the screen: the screen's height made it impossible for me to pull down notifications one-handed.

To counteract such problems you can set up 'one-handed mode'. With this switched on you can double-tap the home button to shrink the screen. I had trouble accessing the home button one-handed to activate this, and the reduced screen made hyperlinks too tiny to hit accurately, the keyboard too small to tap out SMS messages, and text sometimes too small to read conveniently. You can drag the smaller screen to a more useful size, but for me this only worked as a two-handed process. It's not really a useful fix.

I have mentioned Side sense. This is not a new feature for Sony, and is another option if you find the large screen a bit unwieldy at times. It relies on hot spots on each of the two long edges. A double tap calls up shortcuts to eight apps. You can select which ones to display, or the handset can use its Intelligence Engine to take a guess at what you might be after based on the time of day and location. You can also access wi-fi, Bluetooth, battery settings and a few additional shortcuts. Some people will find this a useful feature, others a tweak too far. Still, it's easily ignored if it's not helpful.

Among the camera bells and whistles is Eye Auto Focus. This will home in on a subject's eye, keeping them in focus if they move around. I haven't explored the camera features exhaustively, but test shots I've taken so far are more than satisfactory, with plenty of detail captured.

The Xperia 1 is powered by Qualcomm's top end Snapdragon 855 chipset with 6GB of RAM. Its average Geekbench scores of 11171 (multi-core) and 3501 (single-core) are par for the course. For comparison, the Xiaomi Mi 9, which shares the same CPU/RAM configuration, delivered scores of 11322 and 3200 respectively.

There is 128GB of internal storage, of which a hefty 20GB is used out of the box -- other handsets tend to use between 12GB and 15GB. Sony does add a lot of its own media consumption software such as video and music apps, while gamers might like Game Enhancer, which allows performance settings to be made from within a game.

If the Sony Xperia 1 has a weak spot, it's the 3330mAh battery. Consider some competing flagship-class handsets: the Asus Zenfone 6 has a 5000mAh battery, while the Huawei P30 Pro packs 4200mAh. The Xperia 1's battery has to drive a large screen, and under Geekbench it only managed 7h 57m and a battery score of 4721. By contrast, the Asus and Huawei handsets managed 12h 49m and 11h 3m respectively.

The Xperia 1 stands out with its 21:9 4K OLED screen, which is quite simply superb and the outstanding feature of Sony's flagship smartphone.

Audio output direct from the handset could be better (although a good headset will sort that out) and it's a shame there's only one SIM slot. The tall Xperia 1 is also unwieldy to pocket and one-handed use is challenging, but overall the 6.5-inch OLED screen is more likely to be a deal-maker than a deal-breaker. The main drawback is poor battery life, which seriously lets down this otherwise excellent phone.

Moto Z4 vs. OnePlus 7 Pro: Both good for work with compromises

Google Maps gets a speedometer: Another reason to look at your phone when driving?