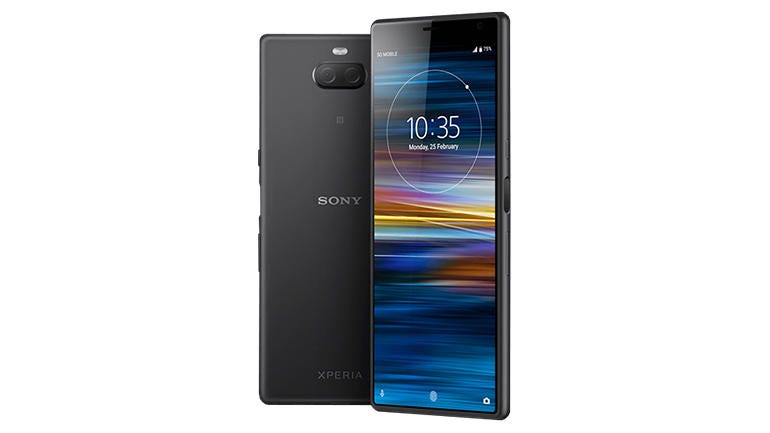 Sony's Xperia smartphones never quite make it into the top tier, but that doesn't stop the company innovating with its handsets. With the 6.5-inch Xperia 10 Plus, Sony takes a stab at providing a screen that's appropriate for watching video – films, catchup TV or streaming from websites. The £349 (inc. VAT) Xperia 10 Plus has a near cousin, the £299 Xperia 10, which is a little smaller (6 inches) but shares the same 21:9 aspect ratio screen.

The Sony Xperia 10 Plus is a fairly typical Xperia design, with rounded edges and a matte backplate that's much more grippy than glass and which does not, thankfully, attract fingermarks.

The handset comes in four colours. My review sample was black, but there are also navy, silver and gold options. The SIM caddy on the left edge will accommodate a single SIM and a MicroSD card. On the bottom edge are what look like two speaker grilles and a USB-C port. There's a 3.5mm headphone jack at the top, while the right edge has the power and volume buttons and a silver indented fingerprint sensor.

The two physical buttons are very thin, barely raised from the chassis, and as smooth as the handset's edges, so they're not the easiest to find by touch alone. They click responsively when used, which is good, but a more tactile finish would have been welcome.

The fingerprint sensor location will delight some and irritate others. It's right under the thumb for right-handed users when they pick the phone up, which is great. But I often want to unlock my handset when it's sitting on my desk, which requires me to grip rather than tap at the phone. Left-handed users might find the location awkward, too.

The main physical feature of the Sony Xperia 10 Plus is its elongated screen which means that while the handset is not particularly wide, it is very tall. With dimensions of 73mm wide by 167mm deep by 8.3mm thick the handset sits nicely in the palm, but I found it impossible to use the phone one-handed, which was an irritiation when using public transport.

Sony has come up with some mitigation for this difficulty. One is 'Side sense'. To access this you double-tap on a tiny, near-invisible, bar halfway down the right edge of the screen to pop out a series of app and settings shortcuts. The latter includes 'one-handed mode', which effectively shrinks the screen down to about half size. You can then drag the screen to a larger or smaller size, and make it dock to either the left or right edge of the screen. Apps are added to Side sense according to your recent and predicted usage, or you can enable only those apps you know you will want to show, disabling all the rest.

It is a neat idea, and well implemented, but it doesn't get over the fact that the tall phone felt rather unstable in one hand, and I found two-handed usage a much better solution.

The screen itself measures 6.5 inches across the diagonal and has a resolution of 1,080 by 2,520 pixels (422 ppi). The screen has no notch, and there's a sizeable bezel at the top, resulting in a screen-to-body ratio of 81 percent. As already noted the screen offers a 21:9 aspect ratio, and this means delivering movies made for cinema full screen, without black bars taking up sections of the screen so that the appropriate aspect ratio can be squeezed in (so-called 'letterboxing').

No handset is a replacement for the full cinema experience, but Sony clearly feels that providing 21:9 gives it an advantage. I did feel my viewing experience was enhanced by this, although plenty of content – including much streamed from YouTube – is still letterboxed.

There is one other advantage that the 21:9 aspect ratio screen offers, and that is working in split-screen mode. The extra few pixels make all the difference, and split screen is more viable here than I usually find it to be.

The screen is an IPS LCD, which means it colours don't 'pop' as much as they might on an AMOLED handset. The rage of colour settings is no more sophisticated than we've seen in the past from Sony: you can tweak colour gamut and contrast – selecting between 'off', 'standard mode' and 'super-vivid mode' – and also adjust the white balance, which has three presets ('warm', 'standard', and 'cool') plus a custom setting.

These do afford some control, but it would have been nice to see Sony nod to movie fans and allow the saving of presets for different genres of film, or even suggest some settings. The other screen colour control is the 'night light', which reduces blue light and can be configured manually or set to come on at particular times.

A handset that prioritises video has to offer good quality sound, but Sony disappoints here. I noted earlier that there are 'what look like' two speaker grilles on the bottom of the phone. In fact, only one has a speaker behind it, and sound quality isn't great. At higher volumes it gets a bit distorted, and it's short on bass tones. You'll need to use headphones to get the best out of this handset's cinematic aspirations.

Moreover, if you do want to rely on the handset for sound the speaker's positioning is not ideal. When holding the phone in two hands for video viewing you might find that one orientation makes it less likely you'll cover the speaker with your palm and muffle it. It's a bit irritating when a phone has to be 'this way up' to get the best from it.

The Xperia 10 Plus runs on the Snapdragon 636 chipset with 4GB of RAM. It's a mid-range performer, delivering an average Geekbench 4 multi-core score of 4952 and a single-core average of 1343. It's worth noting the difference between the Xperia 10 Plus and its smaller Xperia 10 sibling, whose Snapdragon 630 and 3GB of RAM turned in scores of 4090 and 891 respectively.
Interestingly the £269 Motorola Moto G7 Plus, running on the same Snapdragon 636/4GB RAM combination, turned in similar Geekbench scores of 4960 and 1330. It's a potential alternative if you don't need the wide screen and would like to spend less.

There is 64GB of internal storage, of which 17.26GB was used out of the box, leaving 46.74GB free. That looks a little low given that this is a handset that majors on media consumption – at least some of which people will want to download over wi-fi for watching offline later. The handset does support MicroSD expansion, but Sony may have missed a trick by not building in more storage.

The handset runs on Android 9 Pie with a vanilla appearance. Sony does add a lot of its own software, though. I've already mentioned Side sense and the one-handed mode. There are also a lot of apps in addition to the Android staples. Some are Sony-specific, such as the PlayStation and Music apps, while others are third-party tools like Amazon and Netflix. On startup you're offered the option to select which to install, rather than having them all foisted on you without any choice.

There is an 8MP selfie camera, while the back carries a 12MP main camera and an 8MP telephoto camera with 2x optical zoom. Photos are not spectacular in quality, and it's probably wise to avoid shooting in darker conditions, it's fine for general point-and-shoot use.

You might have some fun with the AR effect, which overlays a range of animations from themes like underwater, fairytale and dinosaur, and puts various masks and other adornments onto selfies. You can shoot video at 21:9, which means that video footage can be shown on the handset in its full glory.

Battery life might not get everyone through a working day, especially if you intend to make full use of the screen for video viewing. Under Geekbench the 3,000mAh battery lasted for 6 hours 23 minutes – a very similar result to the Moto G7 Plus (6 hours 22 minutes).

Sony has come up with a clever idea in providing a 21:9 aspect ratio screen to deliver a fuller video experience in a smallish form factor. This helps the Xperia 10 Plus (and the smaller Xperia 10) stand out from the crowd. But there's really no reason to give a handset designed for video consumption just 64GB of internal storage, or to equip it with a single, lacklustre speaker when two much better ones would be more useful. Battery life could be better, too.

If the screen does not wow you, then it's worth looking at alternative handsets that deliver similar punch for a lower price. The £269 Motorola Moto G7 Plus, for example, shares the same Snapdragon 636 and 4GB RAM combination and turned in similar benchmark results and battery life.

OnePlus 6T review: Outstanding reception, solid battery life, and extremely fast performance make this one to buy
OnePlus just released its first phone in partnership with a US wireless carrier and early indications are that sales were brisk. The in-screen fingerprint scanner works well, the phone is very fast, cellular performance is stellar, and you will go a full day with the large capacity battery. Run to T-Mobile and buy this phone now.

Best Android phone for business: One month with Samsung Galaxy S10 Plus
We are just getting started with 2019 phone releases, but it is clear that the Samsung Galaxy S10 Plus sets a high bar for others this year. Huawei just announced its newest phone and it looks like a serious challenger for those outside the US.

Join Discussion for: Sony Xperia 10 Plus review: An affordable...