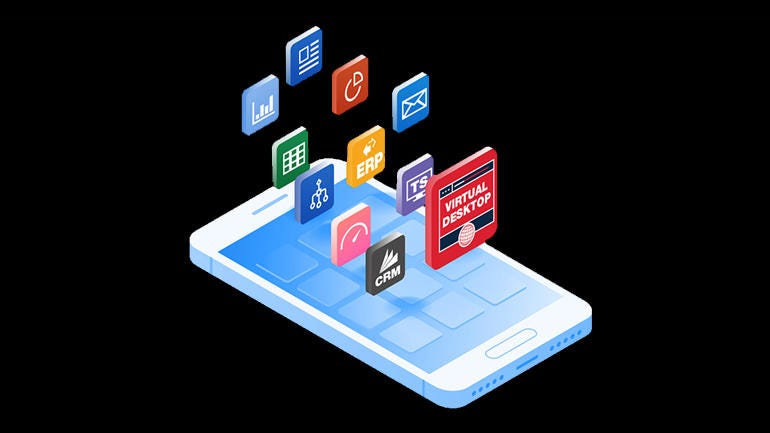 As an all-in-one VDI and remote application solution that you can run in the cloud or on your own server, delivering entire Windows desktops or individual applications on Windows, Mac, iOS, Android, Chromebook and any HTML5 client, Parallels RAS is in competition with cloud services like Windows Virtual Desktop (WVD). However, version 18 also touts its integration with WVD.

Partly that's to appeal to admins with experience of the Parallels RAS management tools, which have handy features that aren't yet available in WVD, like showing the session metrics that reveal poor remote desktop performance for users, so you can troubleshoot them. Those are now bundled up into a UX Evaluator metric that the helpdesk can examine when someone calls in with a problem, to see if they're just on a slow connection or whether group policy or remote access policies are causing issues. UX Evaluator measures things like how long it takes from a user clicking on an icon on their remote desktop until the application responds, rather than just the underlying network connection. Admins can also monitor the metrics proactively, with customisable warnings and critical thresholds, to see if a new service they roll out is slowing things down for users.

Organisations may not invest in Parallels RAS just to make WVD easier to work with. But the integration will be very useful for those who already have remote desktop and applications hosted in their own data centres, or on other cloud services that they don't want to migrate to Azure, even if they're taking advantage of the WVD benefits. The fact that you're only paying for the Azure resources to run WVD if you have Windows 10 Enterprise licences (and the free extended support for Windows 7) makes it an appealing commodity approach to virtual desktops that can sit alongside existing investments. If you're already using physical load balancer appliances, you can carry on taking advantage of those; Parallels RAS 18 includes tools to manage the CPU on load balancers when you increase user density and a High Availability Load Balancer (HALB) virtual appliance to partition front end access traffic between gateways.

It also simplifies setting up WVD in the first place, which usually means working your way through a series of tasks on the Azure portal to set up the VMs and other resources that WVD will run on. Parallels RAS 18 has a wizard that can do a lot of the work for you, including setting up the session hosts and the rest of the WVD infrastructure, deploying the WVD agent on those hosts and configuring autoscaling for the number of users you want to support per host. That's a friendlier approach for admins who might be familiar with VDI but not with Azure. Parallels RAS 18 can also manage autoscaling for on-premises remote desktop deployments.

When publishing applications to users, you can also add bookmarks for SaaS applications and app portals like Azure MyApps alongside virtualised legacy apps. This is flexible and convenient for users, who can access the full remote desktop with preinstalled applications from any device, or pull up just an individual app. Or if they're using Windows, they can open individual applications inside their current Windows session and work with them seamlessly as if they were local, while saving files into the remote environment where IT can handle security and compliance.

WVD already incorporates FSLogix profile containers, the profile management tool Microsoft acquired to replace roaming profiles and user profile disks: it makes user logon faster by making resources like Outlook calendars and OneDrive connections available without users having to wait for them to get provisioned every time. Organisations may also have the licences to use FSLogix with Remote Desktop Session Hosts and their own VDI through Microsoft 365 and Windows Enterprise licences, but setting them up usually means a lot of manual scripting and setting registry keys.

Parallels RAS 18 turns that into a simple settings pane where you can enable and configure everything from retries to Outlook cached mode in a friendly GUI in the Parallels console. This is going to be a very popular feature. Similarly, Parallels packages up a laundry list of some 130 useful optimisations that you can apply to your remote desktop images -- configuring disk cleanup, setting up Windows Defender options or tweaking network settings -- to host more users with fewer resources.

Parallels' 'accelerated file retrieval' caches files that are available locally on the VMs that the remote desktops run on, so they're faster to work with in an RDP session; it also uses a kernel mode driver rather than RDP's native file enumeration, making it quicker to browse through folders. It depends on the network speed, but browsing a large folder over an international connection took less than a minute the first time rather than over five minutes, and even faster once the files were cached.

The servers on which remote desktops are hosted often have enough disk space to put VM images on as a way of distributing them rather than just relying on central storage. There's now a handy wizard for managing that local storage and distributing VMs there.

Parallels has been steadily improving the web version of the management portal to give admins more flexibility; this can now be used to deploy RDSH certificates and other resources, including managing remote printing and scanning services. You can also set up multi-factor authentication (MFA) using standard TOTP Authenticator apps like Microsoft Authenticator and Google Authenticator, which will improve both security and user experience -- users won't be setting passwords that are too simple just so they can remember them, or phoning the helpdesk to get passwords reset, because they can use email or their smartphone to authenticate.

Expert VDI admins may have scripts to do much of this, but IT staff who are being asked to support remote work in organisations that haven't needed to hire expertise for that in the past will find this very helpful for getting the most out of WVD more quickly (and more experienced admins can add their own custom scripts to the tools supplied). Businesses who scrambled to support staff working remotely because of the pandemic will be looking to better manage the platforms and resources involved, and Parallels RAS 18 should ease the maintenance and support burden for them.

Five Microsoft technologies to watch in 2021