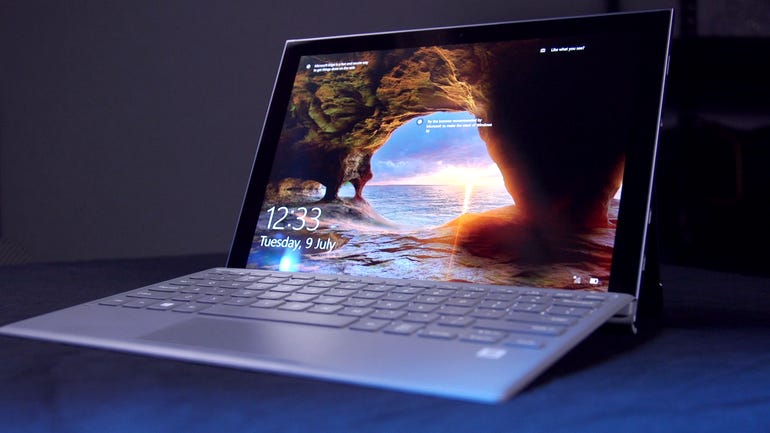 The Samsung Galaxy Book2 is a device that is defined by its choice of CPU, a Qualcomm Snapdragon 850.

The 850 is a 64-bit Arm processor that gives the Book2 some features borrowed from the mobile world: Quick startup, excellent battery, and a fingerprint reader that isn't a pain to use.

In essence, it is akin to a 12-inch tablet with a 2160x1440 super AMOLED display, that happens to run Windows 10 Home in S mode. Unfortunately, this is also its Achilles' heel.

Due to the use of a Snapdragon, initially this device uses S mode which restricts it to apps available from the Microsoft store and limits the browser to Edge. In order to do something as innocuous as install Google Chrome or Mozilla Firefox, Windows needs to be irreversibly switched out of S mode.

However, once this is done, there is still the matter of applications not working on the Arm chip at all. For instance, installing games from Steam is an absolute crapshoot, they might work, they might not.

Having tested this device for a while now, I understand the S mode restriction. It would simply be too hard to explain to regular users why an application fails to work on this device. This includes some of Microsoft's own applications not kept within its store.

For all the benefits that the Arm chip delivers, it simply cannot out-weigh the drawbacks and restrictions that come with it. Rather than being a PC, it is more akin to a Chromebook that runs Windows since it cannot reliably be expected to do more than web browsing, run Office, or stream a video.

Looking beyond the central piece of silicon, this is a well-designed device with a couple of head-scratching decisions.

One area where Samsung has headed in the correct direction is in the battery, which is capable of 1,000 more milliamp-hours, and is rated at 6,120mAh.

When combined with the power-sensitive Snapdragon, this is one of those rare devices where it is capable of all day battery. I've had the Book2 streaming video for a couple of hours and been pleasantly surprised by the amount of battery that remains. Sometimes it is bordering on outrageous how well it handles its energy intake compared to Intel-based systems.

Two generations ago, when the Samsung 2-in-1 was called the TabPro S, needing to be able to reach for power at a moment's notice was mandatory -- but with this configuration, recharging the Book2 is something that happens when your work is done.

Staying much the same as the original Book are the keyboard and trackpad on the Book2, which are acceptable without being great, and Samsung has correctly continued with a pair of USB-C ports.

Samsung also packs an S-pen with the Book2, which if it is your type of thing is a nice inclusion, but as usual with these sorts of accessories, there is no way to keep the pen and device together. Even though the pen will magnetically attach to the left hand side of the device, Samsung advises keeping the pen in its plastic cover when not in use, and I'm not breaking new scientific ground in relaying that plastic does not magnetise well.

The kickstand on the rear is a welcome addition and much better than the preferred four angles of the Galaxy Book.

Then there is the internal silicon, and the fact the original Book boasted more RAM and storage -- 8GB and 256GB versus 4GB and 128GB in its successor. It's a weird choice to head backwards in a world that expects device specifications to at least plateau if not be better than the prior generation.

In Australia, the Galaxy Book2 retails for AU$1,600 from Samsung, and is otherwise hard to find.

This puts it squarely up against the Surface Pro 6, which has an 8th-generation Intel Core i5, 8GB of memory, and 256GB of storage, as well as potentially having a type cover thrown in as well.

The end result is in almost every category, the Book2 is trumped by the Surface Pro 6, with the one exception being battery life.

If you need a PC with stonking battery in a device that is best restricted to web, email, and video watching, then maybe the Samsung Galaxy Book2 is the device for you.

But while it gives a glimpse into a world of laptops powered by Arm laptops, the software side of the equation lets it down. Until this is remedied, I'd stick with Surface Pros, or pray that Samsung puts an x64 chip into the next Galaxy Book.