Talking with Pittsburgh-based Seegrid, we explore why robotics in materials handling is maturing at a rapid pace.
Written by Natalie Gagliordi on Nov. 16, 2018 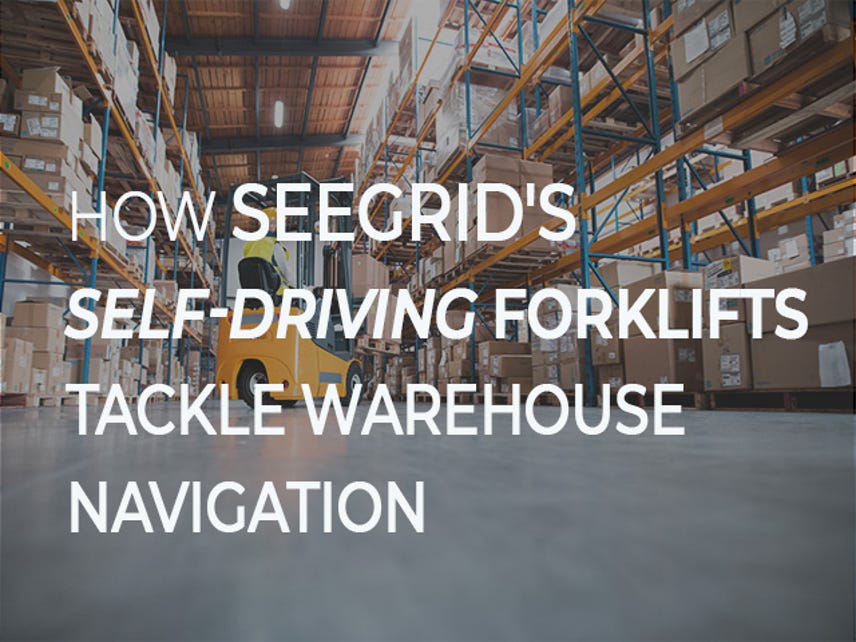 In autonomous robotics, the area of materials handling is often overshadowed by the pizzazz of self-driving cars. But a rapid shift toward automation in e-commerce distribution centers and manufacturing plants has led to a thriving subset of robotic logistics focused on supply chains and automated material movement.

There are a bevy of players in the space ranging from small startups to Toyota. One medium-sized player is Pittsburgh-based Seegrid, founded by roboticist and Carnegie Mellon University professor Hans Moravec. The company makes a range of vision-guided vehicles for indoor materials handling, such as pallet jacks, forklifts, tuggers and other factory and warehouse vehicles.

Seegrid says its robots have cumulatively traveled more than one million miles around factory and warehouse floors. Grocery chain Giant Eagle, which invested $25 million in Seegrid in 2016 and is the majority shareholder in the company, uses Seegrid robots in its Pittsburgh warehouse. Amazon, General Motors, Whirlpool, Boeing and Zulily are also customers.

Seegrid's key differentiator in materials handling is its approach to navigation. Unlike traditional vision systems, which rely on lasers and other sensors to enable autonomous navigation, Seegrid's system uses only cameras. The benefit to this approach, according to the company, is all about the data.

ZDNet recently caught up with Seegrid's VP of product Jeff Christensen to talk about automation and why robotics in materials handling is maturing at a rapid pace. The following is an edited excerpt of our conversation.

Demand: There's been a surge of demand for automation in materials handling over the last 5 years, Christensen said. The rise is due to a confluence of forces, including but not limited to a boom in e-commerce, mass customization of goods, advances in technology, and shifting economics in supply chains.

"There are a lot of physical things that have to get moved, and doing it really well, and really fast, and really cost-effectively, can't be done with human drivers. On the manufacturing side, there's a really big push towards mass customization. The personalization of the consumer mindset is a really hard thing to fulfill."

Technology: From a materials handling perspective, the technology that exists today works well enough to satisfy the demands of the market, Christensen said.

"Only in the last five to 10 years has the technology really been good enough that you can have both reliability and predictability in automation. On the supply side, the technology is now mature enough to legitimately work in real production environments."

Navigation: There are a number of viable technology options for self-driving vehicle systems, but Seegrid's camera-based approach -- called a probabilistic evidence grid -- works on the notion that cameras provide more robust data than high precision sensors.

"Our system uses cameras as sensors, but it's not taking pictures to use as image data per se. It's using it as sensor data, because imagers are really dense data collectors."

"We are taking a highly dense set of data, any individual point of which is less precise than you could get through some other sensor, but using probability, and looking at all of this in aggregate, gives you far more robust navigation than you could get out of a highly expensive and highly precise sensor. That was a big debate, in robotics circles."

Competition: One of Seegrid's big selling points is that its systems can be deployed out of the box, with minimal IT requirements on the customer end. But the company competes in a large ecosystem of vendors trying to play in the space.

"The space is really evolving quickly, and I have no doubt that that's because of the maturity of the tech, and the demand in the market. That's how market forces should work, there ought to be a lot more players in the space. We're not GM or Proctor & Gamble here. This is a very dynamic market, but I like our chances."

Jobs: With every new technological innovation, there are new jobs created and old jobs made obsolete. Automation and robotics are among the most fear-inducing innovations ever, and Christensen said that those social anxieties, coupled with an adherence to the status quo, are common adoption barriers among customers.

"One of the fallacies is that, if you bought robots, so you're going to fire a bunch of people. But in the vast majority of cases it really doesn't happen that way. Businesses can reallocate human capital and have them do better jobs that are more interesting, and are higher value to the company. And this rote, repetitive task of moving pallets around can now be done by robots, and that's great."

Robots have a diversity problem. This Swedish startup could change that

Furhat Robotics is seeking to revolutionize social robotics by moving away from a one-face-fits-all approach.

Truly, the robots are taking our jobs: An automatic transcription software comparison

ZDNet has compared a number of auto transcription services with bemusing results.

Autodesk has come up with an additive manufacturing "toolbox" for the construction industry, with robots and 3D printing systems coming together in a portable shipping container.