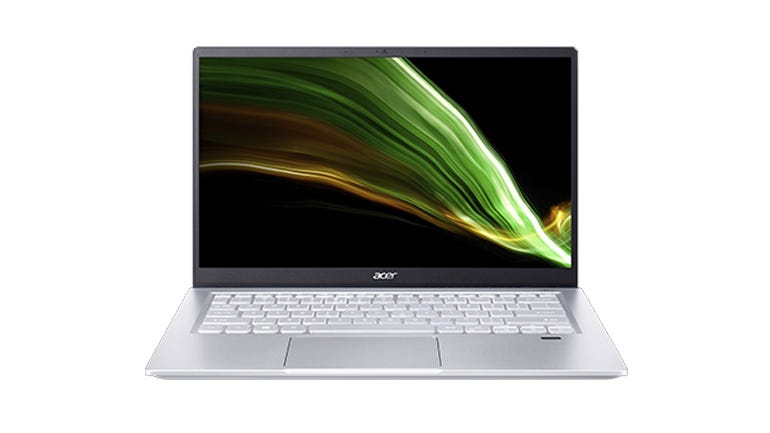 Acer's ConceptD range of desktop and laptop PCs offers some attractive -- if somewhat eccentric -- designs for creative users, but its new Swift X laptop takes a more conventional approach. With its traditional clamshell design, the Swift X is essentially a high-end addition to the company's existing Swift range of ultraportable laptops. However, it manages to follow in the lightweight and slimline footsteps of earlier Swift models, while also offering considerably more power for creative users.

Acer's engineers have done a good job at maintaining the slimline design of the Swift range. The 14-inch Swift X feels surprising light as soon it's removed from the box, and while Acer quotes an 'approximate weight' of 1.5kg, our own scales actually put it closer to 1.4kg -- the same weight as Apple's 13-inch MacBook Pro.

Acer also quotes a 'screen-to-body' ratio of 85.73%, which translates into an admirably slim 'sliced metal' casing that measures just 17.9mm thick by 322.8mm wide and 212.2mm thick. Acer's website also indicates that the Swift X is available in a variety of colours, although there doesn't seem to be an option to actually choose your preferred colour on its online store (clarity, as we come to discover, is not a defining characteristic of Acer's website).

There's plenty of power inside that slimline design, though, with the Swift X standing out from its ultraportable siblings with an 8-core AMD Ryzen 7 processor, and -- for our review unit -- a discrete Nvidia GeForce GTX 1650 GPU. It's annoying, though, that Acer's website seems to imply that the Swift X actually provides a GeForce RTX 3050 Ti as a standard feature, when in fact, it's only available in one high-end configuration.

Surprisingly, the 14-inch IPS display only offers FHD (1920 x 1080, 157.3dpi) resolution, which seems a little short-sighted for a laptop that's aimed at creative users (although the mixed messaging on Acer's website also suggests that teenage gamers are a target audience too). The 300 nits brightness isn't exactly top-of-the-range either, although in fairness the screen does seem bright and colourful to the naked eye. The colours are a little oversaturated on the red end of the spectrum, perhaps, but the viewing angles are good, easily matching Acer's quoted 170 degrees, so the Swift X will be a good option for presentations on the move.

Acer also states that the display supports 100% of the sRGB colour standard, which will be suitable for web graphics and photo editing. However, it's a shame that Acer's limited customisation and upgrade options don't allow users to opt for higher resolution displays, or support for Adobe RGB or DCI-P3 for video editing.

It's easy to connect an external monitor, though, with an HDMI port and a USB-C port with DisplayPort support. Connectivity isn't the Swift X's strong point though, with just that single USB-C port, two USB 3.1, and (another detail omitted by Acer's website) a 3.5mm headphone connector. There's no Ethernet port for wired networks, although the Swift X is up to date with both Bluetooth 5.2 and Wi-Fi 6 networking. We were a little concerned about the power connector, which juts out from the side of the laptop at right-angles and seems to be asking for trouble. Another minus point is the Swift X's mediocre 720p webcam.

Acer's website is never very helpful at the best of times, but on this occasion it's downright misleading. The main web page for the Swift X states clearly that it includes an AMD Ryzen 5000 series processor "and the supercharged Nvidia GeForce RTX 3050 Ti graphics card". In fact, the RTX graphics option turns out to be the highest available specification -- and, for UK customers, it turns out to be a specification that isn't currently available at all.

So, at the moment, pricing for the Swift X starts at £915.66 (ex. VAT; £1099.99 inc. VAT) or $999.99 for the model reviewed here. That's competitive pricing though, given that it includes an 8-core AMD Ryzen 7 5700U processor running at 1.8GHz (with Boost speed up to 4.3GHz), along with 16GB of RAM, a 512GB solid-state drive and GeForce GTX 1650 graphics with 4GB of dedicated video memory. Oddly, the model sold on Acer's UK website includes Windows 10 Pro, while the company's US website currently only offers Windows 10 Home, so US customers who require Window 10 Pro may have to search for that option from third-party retailers, or simply provide their own upgrade.

Customers in the US can, however, upgrade to the GeForce RTX 3050 Ti (with 4GB of VRAM) for just $100 extra, with that price also including a small speed bump up to a Ryzen 7 5800U running at 1.9GHz (with Boost speed up to 4.4GHz). That's a pretty good upgrade for $100, and while that upgrade isn't currently available in the UK, Acer has informed us that it "will be available in retail shortly" -- and hopefully for just £100 extra.

However, Acer's website studiously avoids mention of any other upgrade options, such as increased RAM or storage. Those options seem to be left to third-party retailers, which isn't particularly helpful for business users or IT departments that prefer to specify the configuration of their PCs to suit their needs.

The Ryzen 7 5700U processor used by the Swift X has a relatively modest base clock speed -- just 1.8GHz -- and its single-core performance in the Geekbench 5 test suite is also quite modest -- just 1,180 points. But with eight processor cores at its disposal, the Ryzen CPU leaps ahead when it comes to multi-core performance, hitting 7,430, which puts it well ahead of other powerful but lightweight laptops, such as HP's quad-core Intel-based ZBook Firefly 14 G8 at 5,450.

And, of course, our review unit also benefits from its discrete GeForce GTX 1650 GPU, which scored a somewhat average 80fps when running the Cinebench R15 OpenGL benchmark, but then impressed with a very strong 38fps for the 3D graphics of Unigine Valley (and leaving us wondering how the RTX 3050 would perform).

That sort of performance is particularly impressive given the competitive pricing of the Swift X. The internal fan does get a little noisy during the demanding Valley tests, but the area around the air vent located at the top of the keyboard never gets more than mildly warm.

Battery life also proved to be a pleasant surprise. The 300 nits display was still bright enough that we were able to reduce the brightness level to 50% for our streaming video test. The Swift X also allowed us to switch to the Ryzen's integrated Radeon graphics to preserve battery power, with the laptop lasting for a healthy 8 hours and 50 minutes of online streaming. You should be able to stretch that close to 10 hours if you're not using Wi-Fi the whole time, and the integrated Radeon graphics can still manage 67fps for Cinebench and 12fps for Valley, so it's certainly capable of handling some graphics work if you need to preserve battery power when you're on the move.

The Swift X isn't perfect, and its modest display and limited customisation and upgrade options could be a deal-breaker for some creative users. However, it does manage to combine a lightweight design, strong performance and good battery life at a very competitive price, making it a very attractive travelling laptop for creative users who primarily work online.

Acer Swift 5: An antimicrobial laptop that needs a good clean