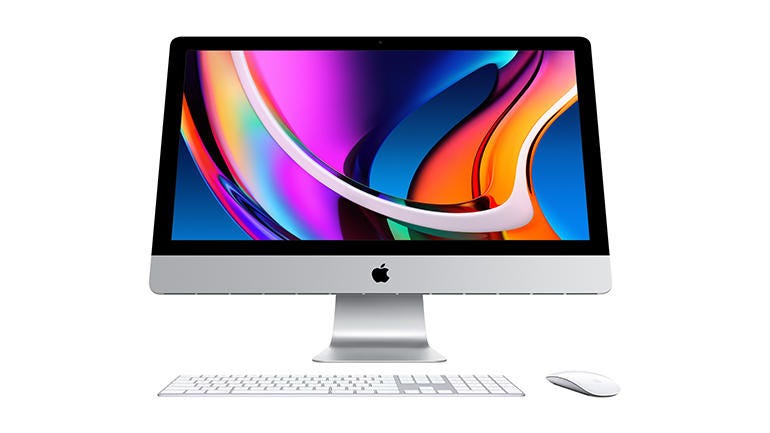 The 27-inch iMac was already due for its annual update, having last been reviewed here in April 2019, so the arrival of a new model for 2020 is no great surprise. But, of course, Apple's recent announcement at WWDC of its decision to move the entire Mac platform to its home-grown Apple Silicon over the next two years has raised serious questions about the future of the Mac -- and also left many Mac users wondering about the wisdom of buying new Macs until Apple's future plans become clearer. Apple will be particularly keen to keep Mac users happy at the moment, given that Mac sales have risen strongly in recent months, thanks to the current trend for remote working.

Apple did attempt to reassure Mac users during WWDC by insisting that there were still Intel-based Mac models in the pipeline, and that it would continue to support Intel Macs for several years to come. However, this is the first new Mac product launched by Apple since WWDC, so it has given the 27-inch iMac a significant update that's clearly intended to overcome any doubts and ensure the loyalty of Mac users.

The 27-inch iMac hasn't received the design overhaul that some rumours were suggesting following WWDC, but this 2020 update is considerably more than a mere speed bump. As well as adopting the latest 10th generation Intel processors, Apple has also updated almost every other aspect of the iMac as well, including the 5K Retina display, along with the GPU, storage, and even the webcam and microphones.

The iMac's 5K display has always been its crowning glory, and the 27-inch iMac now gains the True Tone feature already available on the MacBook Pro range, which uses sensors to monitor the ambient light throughout the day and automatically adjust the display to provide optimum levels of colour and brightness.

You can also buy the new iMac with the same glare-reducing 'nano-texture' glass treatment found in Apple's eye-wateringly expensive ProDisplay XDR. But, as with the ProDisplay, this is an optional extra that adds £500/$500 to the cost. Apple also warns against cleaning the nano-texture display with anything other than the special cloth included with the iMac, which makes us wonder if the display would be sturdy enough to cope with life in a busy office or reception area, or even when working at home (especially with sticky-fingered children on the loose).

Some of the other updates are long overdue, including the addition of a new 1080p webcam, which acknowledges the increased importance of video calls when working from home (although there's no sign of the Face ID face-recognition feature that has been rumoured for the Mac recently). The webcam is backed up by a three-microphone audio system that's controlled by the iMac's new T2 security chip, and which Apple claims offers "near studio quality" for voice recording. Apple's hybrid Fusion drive has also been put out to pasture, with the new iMac finally adopting solid-state storage across the range.

The solid-state drive helps to improve performance, but it's the new processor and graphics options that are the heart of this 2020 update. Last year's 27-inch iMac was available in three standard configurations, with the first two models using 8th generation six-core Intel processors, while the top-of-the-range model ran on a 9th generation six-core chip. The 2020 edition of the iMac adopts 10th generation Intel processors for all three models, but while US pricing is unchanged from last year, Apple informed us that currency fluctuations are responsible for a rise of £41.67 (ex. VAT; £50 inc. VAT) across the board in the UK.

Apple also offers a number of customisation options, including a 10-core Core i9 processor that had previously only been available with the iMac Pro. That option adds a further £400/$400 to the price, but it's disappointing to see that such a high-end configuration is still hampered by that meagre 8GB of RAM. And, as always, Apple's own memory upgrades remain extremely expensive. Thankfully, the 27-inch iMac does still allow users to upgrade the RAM themselves, but 8GB in a machine that costs more than £2000/$2000 does seem rather short-sighted.

Apple also offers a couple of powerful GPU upgrades as well, with an 8GB Radeon Pro 5700 costing £300/$300, and 16GB Radeon Pro 5700XT adding £500/$500. Apple told us that the latter option delivers up to a 6x increase in graphics performance, which raises the question of whether professional users should opt for the new iMac or the Xeon-based iMac Pro, which has remained virtually unchanged since 2017, although the Xeon processor in the entry-level model has recently been upgraded from 8 to 10 cores.

Graphics performance is very similar too, with the 2020 iMac reaching 160fps in Cinebench 15, compared to 162fps for the 2019 model. However, the 2020 iMac pulled ahead on the more demanding Unigine Valley benchmark, with a score of 58fps -- among the highest we've ever recorded -- against 54.8fps. Again, though, the point to remember here is that the customised iMac we tested in 2019 cost a clear £1000/$1000 more than the new 2020 iMac, so this year's model is clearly better value for money.

The increasing overlap between the iMac and iMac Pro could be confusing for professional users who aren't sure which model would suit them best. It also suggests that the iMac Pro is due for an overhaul of its own before too long. However, the challenge for Apple with this new Intel-based iMac is to reassure Mac users that it is business-as-usual -- and, on that score, the new 27-inch iMac ticks all the boxes.

In light of Apple Silicon, should you buy the new Intel-based 2020 27-inch iMac?

Buying a new 27-inch iMac? Here's how to save hundreds - even thousands - of dollars

Apple Silicon: Meet the new Mac, PC of the future