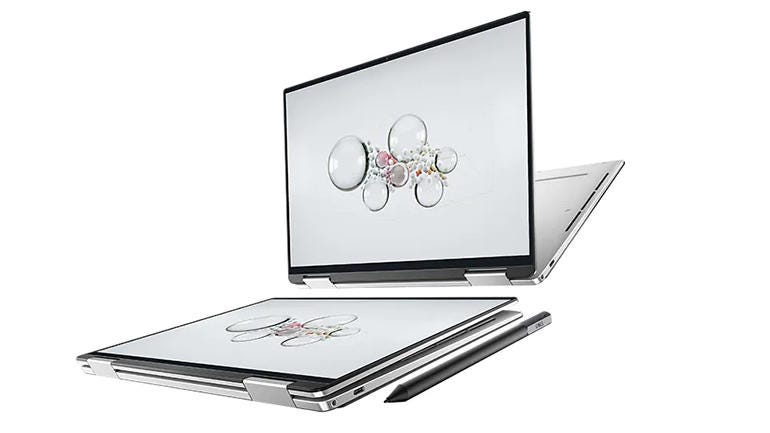 Dell offers two versions of its ultraportable XPS 13: a standard laptop and a 2-in-1 device. The standard version of the Dell XPS 13 that I reviewed in April 2020 was powered by a 10th generation Intel Core processor. Now, for the same £1,399 (inc. VAT) starting price as that model, the XPS-13 2-in-1 is available with 11th-generation (Tiger Lake) CPUs and Intel Evo branding. The new XPS 13 also offers Thunderbolt 4 as standard and up to 1TB of SSD storage.

Dell's XPS 13 was well received from the outset, and for many is the leading ultraportable laptop. The 2-in-1 version retains all the characteristics of the standard model, adding 360-degree screen rotation to support tablet, tent and presentation modes.

The build quality is exemplary. The chassis is made from two blocks of aluminium, resulting in a lid that's impossible to bow without applying serious pressure and a base that feels solid and tough. At 1.32kg this isn't the lightest ultraportable, with competitors edging close to 1kg, but it's still light enough to tote around, and its power brick is relatively small and light. The sliver exterior is unremarkable and might be prone to scratching, but the black inside incorporates the 'woven glass fibre' finish all around the keyboard and touchpad that Dell has employed for a while, lending the device a subtly distinctive appearance.

Dell makes a play of its 'variable torque hinge' design, which it says makes the laptop easier to open as well as creating a more stable platform when the touchscreen is being used. Well, I still needed two hands to open the chassis -- one to hold the base down and one to lift the lid. But it is true that you have to prod the touchscreen with a fair amount of force before the whole thing starts to tip backwards. And the hinges are powerful enough to hold the screen at whatever angle you select.

Minimal screen bezels mean the 13.4-inch screen sits in a chassis measuring 29.7cm x 20.7cm. It's a slim laptop too, at just 1.435cm, although Dell has sacrificed connectivity to achieve this level of thinness, and that could be a deal-breaker for some. The right side has a single Thunderbolt 4 port and a 3.5mm headset jack, while the left has a second Thunderbolt 4 port and a MicroSD card reader. And that's your lot.

It's great to see Thunderbolt 4, but if you need to connect several peripherals you may feel the need for an expansion hub. With this laptop starting at £1,399 (inc. VAT) you might expect something to be bundled, but all Dell provides is a USB-C to USB-A converter. A Dell USB-C adapter with HDMI, VGA, USB 3.0 and Ethernet connections costs £59.23 (inc. VAT).

My review unit came with a 4K (3,840 x 2,400) touchscreen, which is truly stunning. The alternative FHD (1,920 x 1,200) display is the less expensive option, and this configuration may well help to extend battery life. I found the 4K screen to be bright and sharp, and nicely responsive to touches and sweeps. Viewing angles are good too.

Like many laptop makers, Dell has minimised the bottom screen bezel to provide more viewable area. This screen real estate gain is useful for anyone writing, working with spreadsheets or scrolling through web pages. If you're working in tablet mode, with the screen flipped to portrait orientation, you'll also see some benefit from a wider viewing area.

Decent speakers are becoming more and more important on laptops, for video calls or after-hours video watching. There's good and bad news on this front with the XPS 13 2-in-1: the speaker grilles are on the underside of the chassis and even though they are long and sit on the short edges where they curve upwards, they're not really removed enough from a desk to allow uninterrupted sound output. And if you use the XPS-13 2-in-1 on your lap, audio may well be muffled.

Still, under optimum conditions, sound quality is good, although it doesn't go very loud – presumably to avoid distortion. The integrated speakers are OK for personal use, but might not cope with projecting audio across a meeting room, for example.

The keyboard has nicely large QWERTY keys, a double-height Enter key and sizeable Fn and arrow keys. The power key is unmarked and sits at the right end of the Fn row. The two-step backlight is effective, and Dell says the keyboard has a coating to prevent yellowing and staining.

There is absolutely minimal key travel, and although typing generates rather loud 'thunks', the lack of tactile response may put some potential buyers off. I had to slow my touch-typing a little until I acclimatised. The touchpad, by contrast, is relatively large, very responsive and a pleasure to use.

The XPS 13 2-in-1 runs on Windows 10 Home on a choice of two 11th generation Intel processors: my review unit came with a high-end Core i7-1165G7, while the entry-level alternative is a Core i5-1135G7. This laptop's ability to wake from sleep in under a second -- an 11th-gen feature -- is game-changing: it's a joy to just open the device and immediately get on with your work.

As noted, I was sent a high-end configuration to review. Here's how it compares to the entry-level model:

Unfortunately, the battery life of my Core i7/4K screen review unit was disappointing. I fully charged the 51Wh battery and then spent three hours on a typical workload of web browsing, audio streaming and writing into web apps. After this time the battery was down to 50%, so if you go for a high-spec model, be aware that there may be a price to pay in terms of battery life.

Dell has added 11th-generation Intel processors and Thunderbolt 4 to the XPS 13 2-in-1's solid chassis and superb 360-degree rotating screen. However, this is not a particularly lightweight 13-inch 2-in-1 and it's short on ports and connectors, while battery life is disappointing -- at least with a Core i7 processor and power-hungry 4K screen. Then there's the keyboard action, which might be the most problematic issue.

Dell XPS 13 (2020) review: A top-quality ultraportable gets even better