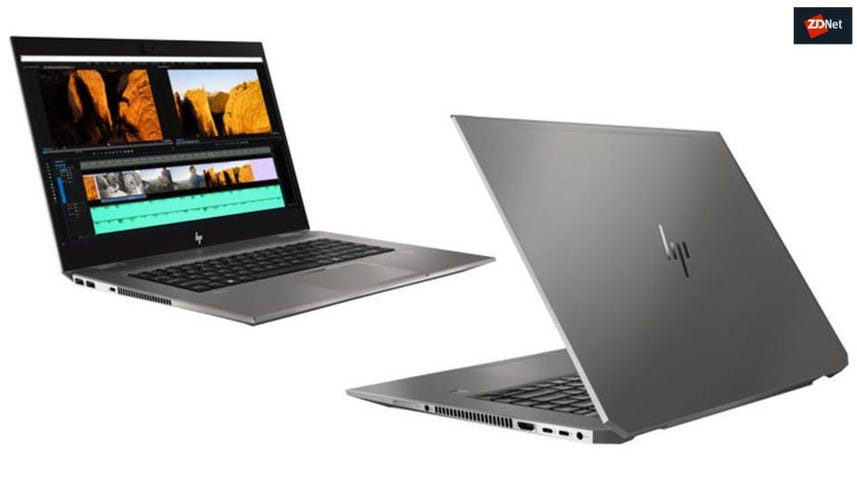 The HP ZBook Studio G5 is made for toughness and power, but not so much for portability. It's a big and heavy machine, weighing 2kg taking up a desktop footprint of 360mm wide by 254mm deep, with a maximum thickness of 174mm. The build quality is very solid, with almost no flex in the lid and a base that should withstand a fair bit of handling as the laptop moves between desks and offices. According to HP, the ZBook Studio G5 has "passed 14 rigorous military standard tests like shock, drop and dust".

There is a distinctive styling to HP's ZBook series, in the shape of angled corner cutouts at the back of the screen and keyboard edges. These serve no purpose, but look good.

Another standout feature is a speaker grille that extends the full length above the keyboard. Carrying the Bang & Olufsen marque, the stereo speakers pump out high-quality sound with rich bass tones even at the highest volume — which is rather higher than most laptops can manage.

The display can be driven by the UHD Graphics 630 GPU that accompanies the latest generation of Intel processors, or by a discrete Nvidia Quadro P1000 if you require more graphics performance. There are two off-the-shelf ZBook Studio G5 models available in the UK (see below), both of which include the Quadro P1000 with 4GB of dedicated video RAM.

My review sample came with a 15.6 inch non-touch screen with 3,840 by 2,160 resolution. This resolution is not available in the two UK iterations of this laptop, both of which have FHD (1,920 x 1,080) screens. I found the 4K screen's 600cd/m2 maximum brightness somewhat overpowering, but its colour rendering (100% Adobe RGB) was excellent.

Above the screen is a webcam, which had a sliding privacy screen in my review sample. This feature is only available on non-touch versions of the ZBook Studio G5.

The keyboard is a pleasure to work with. The keys sit rather more proud than is customary, and as a result require a firm typing action. This might not appeal to everyone, but the key action itself is very smooth, and I had no trouble touch-typing at my standard speed. There are two backlight levels, easily toggled via a Fn key.

The glass clickpad is large and very responsive to single-finger sweeps, clicks and gestures. Buttons are embedded, and also work well.

There's a fingerprint sensor in the wrist rest, and HP provides a range of additional security features including HP Password Manager, HP Power On Authentication and pre-boot authentication.

I noted earlier that there are two off-the-shelf models of the ZBook Studio G5 available in the UK. Their base specifications are:

There's also a Xeon processor option, although this is not available off-the-shelf in the UK. However, it was included in my review unit, which had the following core specs:

With these high-end specifications, the review unit's fan kicked in occasionally — even when the system was idling. It was fairly noisy and would be an irritation in a quiet office. I wasn't pushing the laptop particularly hard, either — just writing into a web-based app, streaming some music and charging the battery. Yet the fan buzzed away for ten minutes or so at a time.

When the fan was on, the area above the keyboard (containing the speaker grille) became noticeably warm, as did the back underside of the chassis.

If you need to carry this large and heavy laptop around, battery life could be an issue. On my review specification, and with the default battery settings, I found that my relatively undemanding workload depleted a full battery to 42 percent over four hours.

However, it's worth noting that the default setting had the screen set to 95 percent brightness, which I found too bright for everyday use — in fact I could work quite happily with it at 25 percent for much of the time. The 4K screen in my review sample may also play its part in draining the battery. Working with a lower-spec UK configuration might deliver all-day battery life, albeit at the expense of performance.

The ZBook Studio G5 has a good range of connections: full-size HDMI, two USB-C Thunderbolt ports, a 3.5mm audio jack and an SD card reader on the right, and two further USB 3.0 ports on the left.

HP's ZBook Studio G5 Mobile Workstation can be configured to handle high-end workloads, although the combination of a Xeon processor and a very bright 4K display will have an adverse effect on battery life. So long as you're not looking to get too mobile with this sturdy but stylish 15.6-inch laptop, it's a serious contender for power users.

Should you be scared of your laptop's webcam?
Pretty much every laptop – and for that matter, tablet and smartphone – has at least one camera fitted that's pointing at how all the time. But how worried should we be about eyes on us? Can the nefariously-minded switch them on to spy on us?

Testing openSUSE, Manjaro, Debian, Fedora, and Mint Linux distributions on my new laptop
I just got a new Acer Aspire 5 laptop. Here are my experiences loading and running Linux on it.