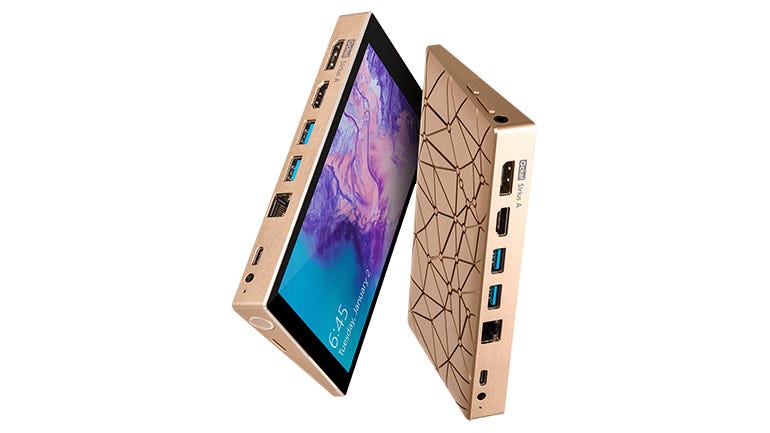 The Sirius A Pro is a curious little wedge-shaped Windows 10 PC with a 6-inch touch display that its manufacturer, Netherlands-based Ockel, claims is 'reinventing the PC'. That's a bold claim, so let's see how well it stands up.

Despite its smartphone-like footprint, the Sirius A is no smartphone, as there's no phone app or LTE module. Nor is it a tablet, as it's too small, stocky and wedge-shaped. So what exactly is it? Although there's no built-in or attachable physical keyboard, the closest description is probably a descendent of the ultra-mobile PC or UMPC of a decade or so ago, with a few more ports.

The Windows 10 Home-based Sirius A costs €699, while the higher-spec Windows 10 Pro-based Sirius A Pro costs €799. The question is whether there's much demand for a 6-inch touchscreen PC with limited battery life (around 3.5 hours) that costs about the same as a high-end smartphone or a mid-range laptop. Especially as, in order to be useful for most productivity tasks, it needs to be connected to a keyboard, a mouse, a large display and probably a power source.

To understand the Sirius A and Sirius A Pro it's worth looking at Ockel's first mini-PCs, the Sirius B (from €249) and Sirius B Black Cherry (€299). These devices won some fans who wanted a pocket-sized PC that's light as an iPhone with up to 4GB of RAM and 64GB of storage, running full Windows 10. They were portable, but required a power source, display, keyboard and mouse.

Via Ockel's crowdfunding campaign on Indiegogo, Sirius B fans said they wanted more mobility, more ports and a touchscreen. So that's what they got.

A big appeal for many PC users will be the Sirius A's ports and slots: two USB 3.0, one USB Type-C, HDMI, DisplayPort and an RJ-45 Ethernet port. There's also a 3.5mm audio jack, an input for DC power and a MicroSD card reader.

The Sirius A Pro feels well balanced to hold in one hand in portrait mode, and comfortable with two hands in landscape orientation. Apps ran as smoothly as could be expected given the Atom platform and the display was crisp when viewing video. The slight angle of the screen also makes for good visibility with the device lain flat on a table.

It does, as claimed, fit comfortably in a pocket, although at 334 grams it's the weight of two smartphones -- and since it's not a phone, your pockets are going to be pretty weighed down if you also carry your handset.

Despite these drawbacks, the Sirius A mostly lives up to its promise as a palm-sized PC that runs full Windows 10 applications.

But, as with many devices in this mini-PC category, there are enough compromises to make me wonder whether Ockel would have been better off refining its original Sirius B concept -- and keeping costs down -- rather than pushing mobility on hardware that doesn't meet most people's expectations for on-the-go battery life.

My main concerns about the Sirius A are its price and its shortcomings as a mobile device, including battery life.

The Sirius A and Sirius A Pro costs place it up there with a decently specified convertible laptop. While the Sirius B devices were cheap enough to take a chance on, the Sirius A models are serious purchases.

Ockel's claim of 3.5 hours of video playback proved pretty accurate in our experience, and not bad for a full Windows 10 device running on a smartphone-sized 3,500mAh battery. Still, that's not much time to work on the go, so you'll probably have to invest in a power bank, which is another item for your travel bag. We were also concerned to note that our Sirius A Pro ran hot after about 20 minutes of watching video.

It would have been interesting to see what Ockel could have come up with if Windows 10 on Arm was an option at the time of its development. The first crop of Qualcomm Snapdragon 835-based devices fell short on performance, although Intel's Atom processors are no powerhouses either. However, a smartphone-class chipset might have helped improve battery life.

An Ockel spokesperson told ZDNet that there weren't many Intel mobile chips to choose from when it began building the the Sirius A in 2016. The Atom processor selected has a scenario design power (SDP) of 2W, whereas the closest-spec Core m3, Celeron or Pentium processors draw at least 4.5W, 6W or 7.5W. A 6-inch form factor doesn't afford enough space for a battery bigger than a smartphone-class unit.

But even with an Arm chip, I'm not convinced Windows 10 is cut out for such a small screen. The 6-inch screen handled video playback and browsing well enough, but using Google Docs and Sheets was more difficult than using Google's standalone apps on a smartphone. In landscape mode -- which is the natural orientation for the Sirius A -- the keyboard consumes three-quarters of the screen, making it effectively unusable. I also found myself accidentally closing Chrome when I meant to open a new tab. Once connected to a display, keyboard and mouse, it's much easier to use the Sirius A for productivity tasks -- but in that case, why pay extra for the touchscreen and battery?

Sadly, Ockel hasn't been able to crack the Windows 10 feature that allows the device to act as a virtual keyboard or touchpad. Intel and Microsoft haven't been able to help stabilise the feature in time.

The general concept behind the Sirius A may still have legs. GDP, the maker of pocket gaming computers, launched a similarly specced but keyboard-equipped mini-Windows 10 PC, and is now considering the GDP Pocket 2 with an Intel Core m3 processor and a 6,800mAh battery.

Windows 10 pocket PC: Ockel's Sirius A gears up for November launch
The six-inch Windows 10 Sirius A is undergoing final testing ahead of its official launch.

Put a Windows 10 PC in your pocket for $249
The Ockel Sirius B is no larger than a portable hard drive, yet it's a full blown desktop.

Chuwi looks to crowdfunding for its new HiGame mini PC
Chuwi has released its next-generation compact mini PC with desktop performance to Indiegogo.