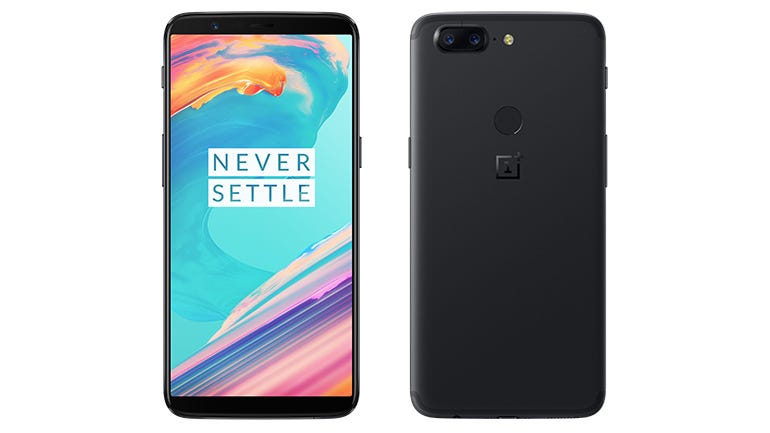 Just five months ago I reviewed the OnePlus 5, a superb handset that cemented the reputation of the still-fledgling OnePlus as a producer of high-quality smartphones at a price that should give the market leaders cause for concern. Now we have the OnePlus 5T which, for the same price as the summer handset, adds an 18:9 screen, improved low-light camera performance and facial recognition to the mix.

This upgrade pattern is something OnePlus introduced last year, when the OnePlus 3 in June was followed up with the beefier OnePlus 3T in November. All of the aforementioned handsets have been superb -- does the OnePlus 5T continue the trend?

OnePlus has always made good design decisions, and this continues with the OnePlus 5T. That doesn't mean it has any distinctive external features. Quite the opposite, in fact: the 5T's no-nonsense design verges on the bland. Rounded corners and an anodised aluminium unibody chassis that's available only in black (or Midnight Black as OnePlus calls it), is about as featureless as it gets.

But that's not a bad thing. The long edges curve gently into the back making this relatively large phone comfortable to hold. OnePlus's useful Alert Slider is on the left edge; this is a three-position button that switches the phone between Ring, Do not disturb and Silent modes. You can configure the latter two modes in some detail: for example, anyone who tries repeatedly to call can be let through the Do not disturb barrier, as can calls from starred contacts and event reminders.

The Alert Slider is slightly textured so it's easy to find when the handset is in a pocket, or -- something I've found helpful on more than one occasion -- at night when you've forgotten to switch to silent mode before lights-out.

There is a headset slot on the bottom edge, next to the USB-C connector and the speaker, which delivers plenty of volume but could do with just a bit more bass and depth.

The only downside of this phone's design is that the back is somewhat slippery. If that's a concern, or if you just want to protect against potential scratches, there's a silicone case in the box.

The minimal screen bezels along the long edge have been retained, but the extra screen length has necessitated removing the bottom bezel. So soft buttons appear on-screen, and the fingerprint sensor is now on the back of the phone. As a result, the screen-to-body ratio has increased from 72.9 percent for the OnePlus 5 to 79.6 percent for the OnePlus 5T.

I prefer the fingerprint sensor at the back, as I find them awkward to use below the screen on larger phones -- particularly when working one-handed.

There are two versions of the OnePlus 5T, both of which support two SIMs, which sit in a caddy on the right edge of the chassis, and run on the same Qualcomm Snapdragon 835 SoC that powered the OnePlus 5. The two RAM/storage configurations are also the same as those found in the earlier device, as are the respective prices. The £499 (inc. VAT) OnePlus 5T has 6GB of RAM and 64GB of storage, while £499 buys you 8GB RAM and 128GB. I was sent the top-end handset to review.

Out of the box, my review sample had just over 110GB of storage free. Although I'd like a microSD card slot so I can add even more storage, 110GB is enough for all my music, with plenty left for some big games, downloaded catchup video along with the barrage of apps that I use regularly. These include tools for reading magazines and ebooks -- including library loans, purchases and Project Gutenberg downloads. The screen is suited to all these pursuits, and reading mode, which reduces blue light, can be set to automatically kick in when specific apps are launched.

The OnePlus 5T runs on Android 7.1.1 and its own overlay called OxygenOS, which is now at version 4. Not having the very latest Android version will annoy some people, but Oxygen is a very competent overlay which is minimally intrusive while adding a lot of neat tweaks and twists.

One feature new to the OnePlus 5T is face unlock, which, says OnePlus, uses over 100 identifiers. I set up face unlock and it worked perfectly for me -- fast and unobtrusive every time. I couldn't fool it with a photo, either. But you do have to be looking at the phone for it to work, and I often want to unlock a handset while it's sitting on a table.

Resorting to fingerprint unlocking is no hassle. Setup is easy, and recognition is fast and accurate. With the rear-mounted sensor, it's also very convenient and was my preference over face unlock.

There are a couple of fingerprint gestures that can be used without registering a fingerprint for security. You can slide down on the sensor to check notifications, and up to close the notifications panel, while a long press on the sensor takes a photo. For the latter to work you have to be in the camera app -- where, of course, there's a giant on-screen button for snapping a photo. It's not a huge array of gesture support, but there is potential for more to be added in software in due course.

Another new feature for OxygenOS is Parallel Apps, with which you can run completely separate instances of applications such as social apps, to access them with different accounts -- perhaps separating work and personal accounts on the same device, for example.

There are two rear-facing cameras: a 16MP f/1.7 main camera and a secondary 20MP camera, also with f/1.7 aperture. The primary camera is the same as on the OnePlus 5, but the secondary camera has a wider aperture (the 5 model had f/2.6) and uses Intelligent Pixel Technology to merge four pixels into one. These changes are designed to improve low-light performance, which does seem to be better than I experienced with the OnePlus 5.

The OnePlus 5T is powered by a 3,300mAh battery -- the same as in the smaller-screened OnePlus 5. I've been able to get a day's life out of it easily enough, but have not yet stretched to two days, and don't expect to do so under normal use. Dash Charge is the saving grace here: using the supplied AC adapter and cable, it's possible to charge the battery in half an hour.

OnePlus has certainly made its mark on the high-end smartphone market. The top-end 8GB/128GB OnePlus 5T model offers all the phone most people are likely to need, at considerably lower cost than the market leaders' flagship handsets. In fact, given the combination of price, specifications and performance, I'm prepared to say that the OnePlus 5T is the best handset I've seen this year.

Still, there's room for improvement. The absence of the latest version of Android will be an issue for some, although OnePlus could counter that criticism with an early commitment to an Oreo update. Despite having over 100GB of free storage on my review unit, I'd still like a microSD card slot on the OnePlus 5T, while an IP rating for dust and water resistance is a notable absence. It would also be great to see support for USB-C headphones as well as having the headset slot -- just to add a touch of future proofing.